I experienced this story as a movie first, and thought that I knew absolutely everything about it. But when I read it, I discovered that although the screenplay was good, it barely did the original justice. Bridget Jones's Diary is a fantastic, quick, fun, chick-litty read that will have you unable to put down from the first entry until she's declared “an excellent year's progress.”

Keep in mind that I did like the movie a whole lot, but I really think that the book exceeds it in both comedic quality and story. The characters that we barely get to know on screen have so much more depth on the page, with the possible exception of Wickham-esque Daniel Cleaver, whom I found to be extraordinarily lovable on-screen. (This opinion could possibly have more to do with Hugh Grant than appreciation of Daniel Cleaver.)

In short, Bridget Jones's Diary is a delight: witty, clever, funny, relatable, and frankly, flat-out adorable. Read it once, twice, three times in a row and you won't grow tired of it.

Also, have developed from book undeniable and irrational need to type as if composing business memos. Have left out all personal pronouns and articles from every essay have written all day. Those who have read Bridget Jones will understand completely; those who have not will think have gone mad.

Also, similarly to when having watched more than 30 minutes of “BBC America,” have inexplicably slipped into faux-British accent and have begun using British slang. This makes family extremely annoyed. 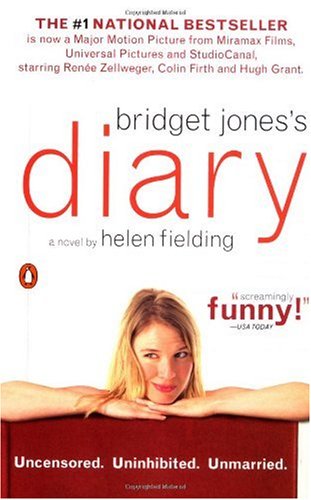