Looking For Alaska by John Green

I have recently read Looking for Alaska by John Green. It was easily one of the most enjoyably complex and breathtaking books I have ever read. It is amazing how many aspects of teenage life the author manages to stuff between the two covers. Other novels I have read, addressing similar issues are riveting and well written, no doubt. However they can be very filtered Yes, the are about very serious issues addressed in ways that teens can relate to. However more often than not they are too vague, too simple. They shield readers from all the true, raw emotions the way they are portrayed to be felt by the character. In addition they can be very predictable. Often it does not take long to figure out most of the plot and to have a good general idea of what is yet to come. Looking for Alaska, however, takes many twists and turns and addresses so many issues in a way that the reader cannot only relate to but can feel almost as if they were there with the characters, at Culver Creek Boarding School, as if the whole story were actually unraveling in far away Alabama as they read.
The characters and emotions are also extremely real. Each of the five main characters make up for some aspect of family life they lack at home by creating their own family. They surround themselves with people who can understand just enough to be able to stand by their side or hold them as they cry, but not understanding enough, to have to feel the same pain, or to feel pity towards them. I felt for the characters as I read...and there was enough substance laced into their character that I was able to read deeply into each of them. It wasn't quite so set in black and white the way many other books I have read come across. Not only can the reader feel the emotions of the characters, but their own emotions will be aroused as well. There are parts of the story to induce, anger, fear, comradery, and tears. The few parts of the story that I could predict before hand were never quite what I had thought. Looking for Alaska holds a surprise on each and every page.
The story also addresses many forms of relationships between the main character, Alaska, and her various friends. Relationships that every real teen will most likely face. Each relationship discussed in this story takes on a different stage. You have the Colonel, who has been Alaska's friend the longest, he has seen past how attractive and provocative Alaska is and takes on a form of brotherly affection for her. Takumi and Pudge are both in the same boat. Neither could overcome the same mountains as The Colonel. Takumi however has been friends with Alaska longer than Pudge, and he has, for the most part accepted that he and Alaska will never be more than friends. Pudge on the other hand quakes beneath Alaska's unpreventable flirting and still holds on to hope, despite Alaska's boyfriend Jake. Both these two boys, romantically attracted to Alaska or not, have also, like The Colonel developed a strong bond with the fiery girl and develop a sense of protectiveness towards her. Lara has become Alaska's best friend and develops a sisterly bond with her. She unfortunately has to deal with the same pains as Pudge, for she finds herself attracted to him, and though he develops a similar attraction he cannot break through his love for Alaska. Try as Alaska might to hook them up. Difficult as this must be for her and Pudge both, they are both at ease enough with thier friendship with Alaska. This is another factor of Looking for Alaska. The author discusses sex in a very nonchalant manner that teens can better relate to. He doesn't write about these experiences in a way that cause the reader to be embarrassed or humored by. He writes about them in a very simple yet very real way. It is not overdone on either side of the line. He doesn't play it out with excessive and unrealistic details that one finds in a harlequin novel, but he doesn't make it disgusting and X-rated either. Just very real, something that you don't think twice about because he wrote it just the way a real teen would be faced with it in their lives.
Contrary to what most parents and other adults may find unsuitable for teens, it is just the sort of story that is healthy for a teen to read. It talks about real teen issues without leaving behind any unrealistic expectations, such as the Twilight Saga's romance of Edward and Bella. Nor the dramatics of Laurie Halse Anderson's character of Melinda who, after being raped cannot bring herself to talk even when it endangers her academics and family life. She also finds her lips covered in scabs from constantly biting them. As possible as those things may be for a rape victim, Laurie Halse Anderson takes the extreme possibilities of a girl's response to rape and bundles all of them into one character which can be overwhelming. Looking for Alaska has just enough, to make it appear less like a piece of fiction and more like something that really happened, or in any case definitely could happen to most teens.
I would highly recommend it to not only teens but anyone who loves a good book. It is a story that I consider a good read not only once, but time and time again. 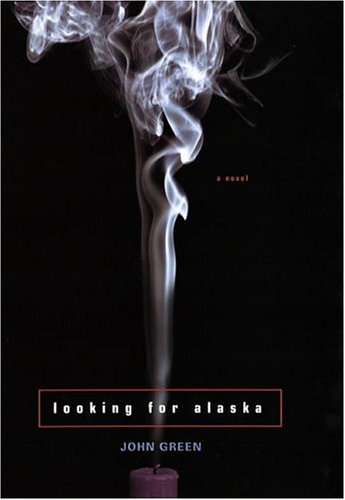