The Tower of the Anonymous Playwright | Teen Ink

The Tower of the Anonymous Playwright

The tower:
Shhh…its holds something so near and dear,
A treasured possession (a golden clock and
A silver locket).
They keep a secret,
That I’ve buried deep inside of me.
The dragon:
Twining itself, winding, around the tower
Like a choking vine.
Ever-ready to incinerate in a fiery bath,
My long-kept desires and this
Terrible enigma.
The princess:
Curse her soul, she’d fled and forgotten a thing
More precious than her cheap
Freedom,
a vital organ you see,
Pulsing! Beating! Slowly dying… the clock ticking away
The hours until the locket will never
Again open—and then what?
The prince:
Look at him—Scrambling up the side of the tower,
It’s laughable, really, his ill-gotten
Valor, that doesn’t do him any good—does it?
He never quite reaches the top, failing
Over and over,
As there’s no princess to let down her hair.
And then there’s me:
Watching it all impassively, knowing how the struggles
Are all in vain, mere scripts to act out.
I know this as surely as the tower is my heart,
The locket my love,
The clock my life,
And the dragon, you see, is my hatred—I want my prince to die.
But I still don’t know who the princess is
And why she left.
Could you tell me, please?
Is she the child in my mind, my innocence, and when she left,
She left behind a dying heart, and a fire-breathing dragon?
Or is she simply a ghost, an unwelcome
Fiend,
All the demons inside of me
Finally released,
And when the clock strikes twelve and I do indeed die—
I’ll wake up tomorrow
Anew?
Or, please tell me this is not it (as I shiver at the thought)
That she’s the director?
The writer
Of this terrible, clichéd tragedy? Because you know,
It really is funny
That if it’s true, then I’ve known it all along,
Dreamt of it, even,
On those cold, weary nights alone in my own tower
When the world is on repeat
And I realize
How I am merely doomed to become her someday, and I’ve
Been recycled by Fate,
Spit up into this world and shoved in a tower,
And told I was someone else—
Who am I?
I am the god forsaken fire-breathing dragon
I am the cowardly princess
I am the idiot prince with a false sense of duty
My own worst enemy,
My own demons,
This is me, take it or leave it—and do you want to know the most
Frightening thing of all?
I’ll tell you the secret:
I’ll never escape my tower (have you figured it out yet?)
no matter how hard I run
Or how many clocks I wind up,
Because the clock will strike twelve again and again,
And I’ll die,
And I’ll only switch roles in this terrible, pre-destined
Show, written by a damned, sadistic, anonymous
Playwright,
Who won’t even reside for a minute (is it too much to ask?)
In the tower she’s made so nicely
for me. 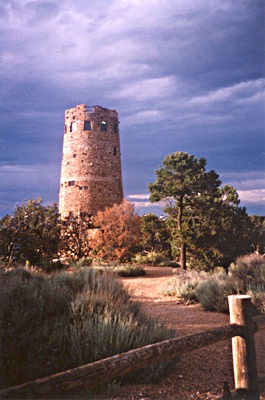 View profile
I'm not sure why I took all eternity to read this. One of life's unaswered questions. Anywho, I'm fascinated with the symbolism in this poem. It reminds me of allegories. The title is like freakin' awesome and original. Awesome-sauce, Jade!
Jade.I.Am ELITE said...
on Jun. 21 2013 at 11:07 pm
Jade.I.Am ELITE, Fishers, Indiana
214 articles 14 photos 1159 comments

Favorite Quote:
"If you have built castles in the air, your work need not be lost; that is where they should be. Now put foundations under them."
Henry David Thoreau

"I fell in love the way you fall asleep; slowly, and then all at once."
John Green

View profile
Wow, I am truly speechless. This is sooo unique and full of spirit and voice that I had to read it over and over! What a beautiful concept that is barely trampled by current poets. Wonderful writers voice shines through this piece and doesnt stop, not even for the end. I absolutely love the rolling figurative language and metaphors, along with the theme of fantasy plays. I, personally, have always been interested in theatre and fantasy settings, so this to me is like a masterpiece! Phenomenal job; you are a brilliant writer. :P
Jade.I.Am ELITE said...
on Jun. 21 2013 at 7:17 pm
Jade.I.Am ELITE, Fishers, Indiana
214 articles 14 photos 1159 comments

Favorite Quote:
“If it weren’t for the coffee, I’d have no identifiable personality whatsoever.” –David Letterman

View profile
WHOAAAAAAAAAA. This is going on my wall of awesomeness. Just WOW. How did you come up with this idea? I want just a mere moment of Callie ingenuity so that I can write like this, even if it only lasts for a few seconds. I think I would gladly give 3/4 of my elbow and a chunk off of my left shoulder blade to create a poem of this quality. EPIC! :D
freeperson DIAMOND said...
on Jun. 14 2013 at 12:21 pm
freeperson DIAMOND, Burlington, Vermont
59 articles 0 photos 229 comments

Favorite Quote:
"Have you seen the way he looks at you, the way his expression softens and his eyes are like stars...?" - Ara Weston