The Mark of a True Warrior | Teen Ink

The Mark of a True Warrior

He has the mark of a true warrior,
One that will not fade,
Will never disappear.

It’s not the jagged line of a dagger,
Or the hole of a sniper,
No, worst than that.
He has the wound of a memory.

The wound of a memory cannot be treated,
But it can be healed,
On it’s own time.

He’s got to remember the innocence of a boy,
But the war of a man in uniform,
The dreams of a child,
And the nightmares of an adult.

Nightmares are sort of like memories,
So strong, yet so weak.

They can be pushed back by happiness,
But reappear with fear.

He has to channel that fear,
Control it like it controls him.
He has to give in,
Let fate take the wheel from his hands,
and stop looking for exits.

Only then, can he be free.
Not him, his friend.

The friend that wouldn’t let him go alone into enemy base,
That shared gum and played basketball.
That friend that gave his life for him.

As he washes his hands at the kitchen sink,
He remembers.

That bullet that hit home,
The blood on his hands,
The tears he shed for his frieand who could never cry again.

He looks out the window above the sink,
At the children in his yard,
Remembering his childhood.

One more glance at his hands,
The water that will forever wash his sorrow,
And he realizes:

The memory can go on forever,
But the pain doesn’t have to. 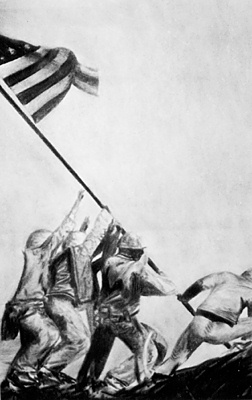 The author's comments:
I wrote this poem one day on a plane flight when I was thinking about my Grandfather who was in the war as a spy and was caught by the enemy for months before he was finally freed.
Post a comment
Submit your own

Favorite Quote:
"At the touch of love everyone becomes a poet." ---Plato

Favorite Quote:
"I can gather all the news I need on the weather report. Hey, I've got nothing to do today but smile." Simon and Garfunkel 'The Only Living Boy in New York'