Favorite Quote:
I arise in the morning torn between a desire to improve (or save) the world and a desire to enjoy (or savor) the world. This makes it hard to plan the day.
E. B. White

We were sitting in a hotel suite in Sin City, the only two sober humans for miles
When Aunt Susan told me:

“My grandmother, during the Depression,
Her family would leave the door open every night
And if someone came to the door during dinner, she would let them in.
Her family didn't have much at all – they barely made enough to live on.
But people were hungry, and she had food, so she fed them.”

And as she said this I felt the almost unbearable weight of the
Trash-compacted bag of spoiled leftovers
I carried to the edge of the driveway on an early Tuesday morning.
And I heard the shiny gold lock click as my father turned it every night – for protection.
My middle-class suburban neighborhood in Grand Junction, Colorado, was not a safe place to be.

And later, I heard jobless suburban housewives “sipping red wine out of crystal glasses”
Complain that seasonal workers from Mexico
(who picked fruit from 6:00 to 6:00 every day during the summer and sent every cent back home)
Were hitching a ride on the back of their “hard work.”
After all, this is America, people, the land of opportunity: you have to choose to be poor.

I'm leaving the capital letters behind, no more Democrat, Republican, or Socialist.
Policy has no place in poetry.

Will we sit at our dinner table,
Holding hands as we pray to the country's designated God,
Eating so much that obesity is a leading cause of death in this nation,

And ignore the doorbell?

I almost regret that we were bailed out of our mess
Because I long for the empathy that widespread desperation brings.
But no, “We the People” cannot be inconvenienced by tragedy.

More people die in the United States of too much food than too little.
So why are people dying at all? 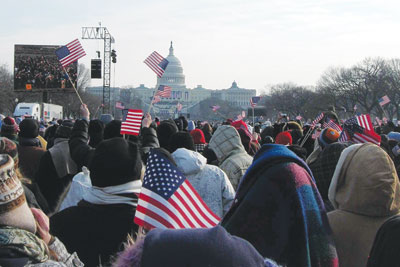 Favorite Quote:
Anger is an acid that can do more harm to the vessel than to anything on which it is poured- Mark Twain

Favorite Quote:
"To thine own self be true," -from Hamlet, a play by Shakespeare.
"I have sworn on the altar of god eternal hostility against all forms of tyranny over the mind of man." - Thomas Jefferson

View profile
Omg Great great great poem. This poem is wonderful. It is like every good ideology poem is, it has direction. It almost like a good entertaining mini essay that has not only good flow but a clear climax