Favorite Quote:
"There is something living in these lives I've not yet found." Julia Cohen

September, 1973: Drunk with the starry void,
Pablo Neruda dissipates into cinnamon.
A pedestrian casualty,
half asleep and smelling of candles.
Another poet transcends humanity.
Death is a creature of autumn.
There is no divergence of apathy and autumn.
These trees, these tresses, are void.
Only ministration can foster humanity.
Coffee is no longer coffee when you add
cinnamon,
it is a corporal endeavor, like confetti and candles
and a mass media casualty.
Everything is a casualty
of the vapidity of autumn.
A baroque shrine of candles
and mementos, void.
Nothing smells more like cinnamon
than the regrets of humanity.
There is chastity and there is humanity.
No one remembers the name of a casualty,
but we all know the health benefits
of cinnamon.
There is nothing pure about autumn.
We are pawns of society, void
of intellect, mechanically pumpkin spicing
our lattes and candles.
My mother never bought candles,
she was too disenchanted with humanity.
The air in our house was stale and void
of fragrance, a casualty
of adversity; it didn’t smell like autumn,
or artificial cinnamon.
I don’t like cinnamon
or candles.
I lack the elegance to appreciate autumn
and the ignorance to appreciate humanity.
Maybe my life will be ceaselessly void.
Perhaps when Starbucks’ contract with
cinnamon is void,
and candles stop selling, a casualty
of recession, autumn may once again
gratify humanity. 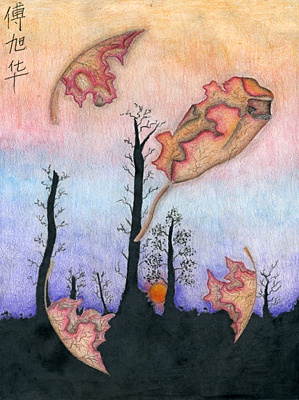