Mercury created this ad to get people to buy their SUV, the Mariner.
The target audience is fit middle-age white women in the middle to upper class because all the pictures contain a woman running, driving, and unloading her groceries.
In the ad they ask the question, “Who knew an SUV could help Amy discover the joys of the gym?” The literal meaning is that if you buy a 2007 Mercury Mariner you will be suddenly motivated to go to the gym and have a constant motivation every time you sit in it because it looks so good and you want to look just as good as a leather seat. “The two-tone leather seats serve as constant motivation.” They use that against the reader.
They make your mind believe that the Mariner is a weight-loss program. Buy it. You will go to the gym and you will lose weight. The pictures show a fit woman running, driving, and doing errands. It is trying to make you believe you can look like the woman in the ad just because you bought their SUV. They also show the woman constantly happy, trying to show that the Mariner will make you non-stop happy.
The lifestyle being portrayed is that of luxury and health because Mercury says that the SUV is eye-catching and will make you work-out and become healthier. “And while the Mariner looks better with every mile, Amy can only hope the treadmill does the same for her.” They have a false fantasy because a car does not do this. And a car looks worse as it accumulates more miles.
Personal health is expressed in this ad. This ad revolves around the woman working out. A car isn’t personal health because a car keeps you from walking, running, or biking places.
Plain folks, exaggeration, and bribery are used to persuade the readers the buy their car. Plain folks bring normal every-day people into the ad making it a common item. Exaggeration makes the Mariner seem more than it is; in reality it’s a car, not a gym, or a trainer. Bribery makes you believe you get more out of the car than just a car and good gas mileage. It makes you believe you will lose weight. A lot of people want to lose weight in the world; it’s the perfect bribery option, but not a realistic one.
They did one thing right. They put their name on the ad. 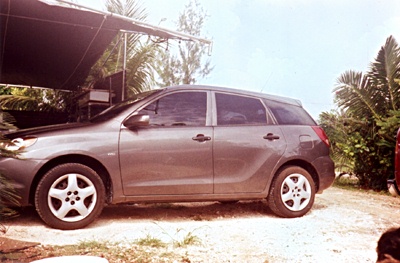 Favorite Quote:
By the time you are done reading this you will have wasted 10 seconds of your life.

Favorite Quote:
When I get logical, and I don't trust my instincts - that's when I get in trouble. -Angelina Jolie