Donny: The Silent Heart of “The Big Lebowski” | Teen Ink

Donny: The Silent Heart of “The Big Lebowski”

I remember watching “The Big Lebowski” for the first time; I must have been about 15 years old and was excited beyond words. I had been talking about wanting to see it during a car ride with my uncle when he suggested we watch it that night; not only would I be watching a cult classic that really intrigued me but I would be watching it against my mother’s wishes, making it all the more thrilling. Being a mere 15 years old but pretending I was more mature, I settled in to watch the movie. After watching it I was wildly confused and a little underwhelmed, not because the film was bad but because I hadn't really understood it: I knew that what I had just watched was good, maybe even genius, but I didn't know why. It broke my heart. However, I remember instantly connecting to Steve Buscemi’s character Donny; he was my favorite of the trio and stayed with me from then on. Three or four years later I rewatched the movie because I needed answers, I needed to know if I had just been dumb or if I actually didn’t like it; the notion of the latter was terrifying. Just having rewatched it, I loved it. I could see why the humor hadn't gotten to me on the first viewing and I understood why I had been baffled before: this is so clearly a character-driven movie and on my first viewing I was expecting a plot-driven one (at that stage in my life I thought all movies had to be plot-centric). I really love it now and there's so much that I could talk about regarding it but I will leave that for a later time. On my second viewing however, my connection to Donny was stronger. Perhaps this is an excuse for me to simply gush about how much I love him and Steve Buscemi (who I just continue to admire with every movie I watch; regardless of the quality, his performances never falter) but it’s also an opportunity to explore why he’s such a great character and why, despite being quiet, remains a pop culture icon as much as his counterparts.

I recently read a theory (linked below) that explains why Donny is so quiet; it proposes that maybe he is just a projection of Walter’s (John Goodman) mind and is his way of coping with PTSD as Donny represents a fallen Vietnam camrade. While a clever personification of dealing with trauma and an idea that would perfectly align with Walter’s personality, I think it also defeats Donny’s purpose. He might not be as outspoken as his counterparts but he does not lack personality and neither is he a weaker character because of his shy demeanor. I think that essentially, without Donny there would be no trio for he is the heart of this story.

At first instance, Donny serves as a conduit for the audience into the story. While he may seem ordinary and to not fit in with the other more eccentric, idealistic characters, he has enough personality to stand out and is as “normal” as we imagine ourselves to be. “The Big Lebowski” is a film that doesn't explicitly state much information about characters but transmits it through its mise-en-scene; Donny has a collection of bowling shirts with different names and colors that highlight his passion for bowling (which we also feel from the film’s start). He’s also a very gifted bowler as he never misses a strike. From the beginning of the film when we see him celebrating that first strike and as he triumphantly shouts “Whoo! I'm throwing rocks tonight, mark it Dude” and we see that joyful yet innocent smile we can't help but like and root for the guy. Likewise, when he misses that strike towards the end, we feel his pain and our hearts break a little for him. Furthermore, Donny is the friend that gets picked on mercilessly, not only do we feel bad but we can also relate, at some point we have all been our friend group’s designated laughing stock or punching bag.

Donny is also a bridge, a link between two polar opposites that form the unlikeliest of friendships. Jeff Bridges’ the Dude is a pacifist, laid-back man while Walter is a Vietnam veteran who lashes out both verbally and physically at the slightest provocation. Donny is the glue that holds this trio together, he is that vulnerable friend everyone loves and will do anything to protect. When this innocent, bowling prodigy is taken from this world too early by a heart-attack and his friends scatter his ashes near the beach we see the culmination of Donny bringing these two together. They have been at odds various times throughout the movie showing the complexities of the relationship between these two; when Donny passes there is a doubt that perhaps this will totally pull them apart but, bittersweetly, it is their friend’s passing that brings them closer together and even leads them to show physical affection towards each other. Now, this very same scene is one of the film’s most darkly funny ones but it is also the heart of the movie through which we very clearly see how this three-way friendship works. It's funny yet poignant and if it hadn’t been for the few glimpses of the sweet, innocent friend we had seen throughout I don't think that the movie as a whole would have worked as well. It is brilliant, don't get me wrong, but even just this small sincerity makes it that much better; without it, the idiosyncratic and even cynic nature of the movie would have felt cheaper and hollow and perhaps like a mere gimmick.

It really is a true testament to the Coen Brothers’ genius how they managed to craft such uniquely defined characters, handle very dark, comedic tones and make them all come together without missing a beat. Despite the Dude and Walter’s eccentric personalities, Donny will always stand out to me and be the one that I find to be the most unique and important to the film. Obviously, I am quite biased towards Donny and his portrayer but keep in mind that well, you know, that’s just like uh, my opinion man. 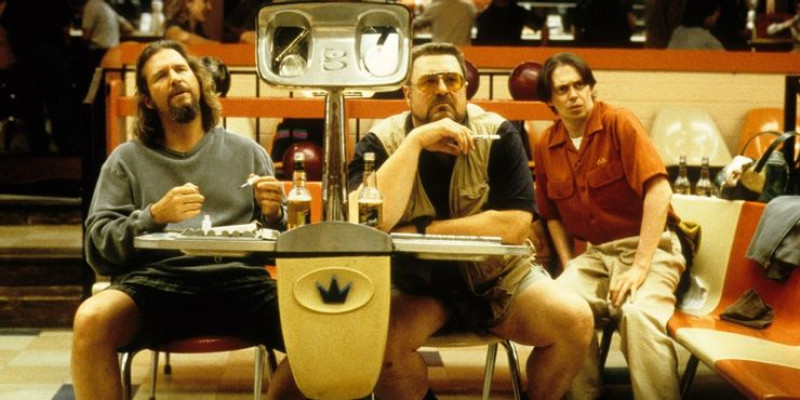 Favorite Quote:
"To live is the rarest thing in the world. Most people merely exist, that is all." -Oscar Wilde