AI Technology is Better Than You | Teen Ink

AI Technology is Better Than You

Favorite Quote:
"We lost ourselves in books, we find ourselves there too"

All these films have one thing in common- Robot Domination. The first question to ask is what does Robot Domination look like? Robots being more supported. Robots then replacing us. Robots having more superiority over us. Robots being a new race for our world. I, a 15-year-old student am scared and troubled about what I have found out.  Science fiction is no longer a fiction- it is our reality.

A few years ago, I watched Ghost in the Shell. A film based on a future dystopia on how robots and technology will become a crutch for you. Watching this film, I was fascinated by everything you could do with this new technology and thought how cool this reality was even though I knew how creepy and unnatural it was. So, when I came to write this article, I was shocked. Even though Robot Domination is such a pressing issue, I hadn't got much of an idea of how it was becoming more and more of a reality. Coming back to the film I questioned why was I entranced by this world? I knew it was wrong, but my imagination wouldn't stop.

This is what is happening now.

Scientists and engineers are creating these out-of-the-world robots because they cannot stop themselves. They know the dangers, but they keep creating them and they are edging into our life. If I asked how many years do you think it will be before things like this occur what would you say? I was certain I wouldn’t even see this future, but the answer was nothing similar to what I suspected. Zero. It is already occurring. The evolution of AI technology is already here, and we are blind in the face of it.

A few months back I saw on Sky News a robot had become a conductor. All those movies I had seen suddenly seemed became a reality and I felt intrigued and thought how bewitching and revolutionary it was. Then recently I read an article from the National Geographic and it said 'Automation has the ability to take jobs overnight'. It occurred to me that someone had been denied that job position and lost a salary they could have needed-  the robot had replaced a human. In Japan, on the news more recently, there were robots being waiters and serving people. The robot had replaced a human. Then last week I saw a robot clean floors. The robot had replaced a human. More and more robots are appearing on the news and it’s transforming my future. In our current situation, robots are taking jobs that people so desperately need because it seems 'medically wise'. The pandemic has fast forwarded the time where a robot dominated dystopia will occur. The question is not if but when it will happen.

We have gone too far with creating robots. We must stop playing god.

In light of the recent events, the pandemic has sped things along and robots are becoming a regular appearance on social media and what you see. On the National Geography article, it also read 'Suddenly, replacing people with robots—an idea majorities of people around the world dislike, according to polls—looks medically wise, if not essential.' But will it stop there? Will people be able to cross a line and stop? After the pandemic I believe many people will not get their jobs back that have been taken from AI technology. Jobs is the first step. Money and how useful something is, is the next.

Robots are cheaper and more valuable than humans.

When I researched how much does it cost to employ a robot one of the answers was $300. Another was $400. Another was $5000. All are cheaper than humans. They are also more valuable. A robot is more valuable than you. They are stronger and faster so work better and it is still cost effective. So what is to stop the companies from keeping on the robots? What are morals against money? The end result is that robots will replace us. That is what I, as a teenager will have my future shaped around. Co- founder of Microsoft, Bill Gates, said "First the machines will do a lot of jobs for us and not be super intelligent. That should be positive if we manage it well. A few decades after that though the intelligence is strong enough to be a concern”. Today you could argue that we are managing the use of AI technology but if Covid-19 went out of control in places (which is already happening) then what’s to stop people employing a cheaper and more beneficial employer?

On the other hand, AI technology has many benefits: health, fitness, security, and productivity. Robots save people from doing dangerous jobs that could potentially harm humans. They can now write articles, be a conductor or even go to space. Your childhood fantasies are finally coming true. But shouldn’t they stay childhood fantasies? These qualities have been able to progress the world by many years and that’s how it should be. There should be a fine line between no use and too much use which is vital for our future. But more recently, that line has been crossed. So when I was researching I found myself asking this question: what can I do? As students there is only so much, we can do. We can’t demand that companies lower their employment rate for AI or create a complete balance because that is impossible. What we can do is voice our opinion. Voice your worries as it is your future they are shaping. If people who have enough power hear our opinions, it could impact this balance and make it more achievable. I am not against rising tech knowledge to help our race, but I am against technology having more jobs and owning more power than us. I want to ensure my future will not be over-run by robots and I will not use technology as a crutch, and I will not be worth less than I truly am.

I want to leave you with a question that we will all need to face in our future. Will there be more than one 'kind' to dominate the earth? Will this be you or AI technology? 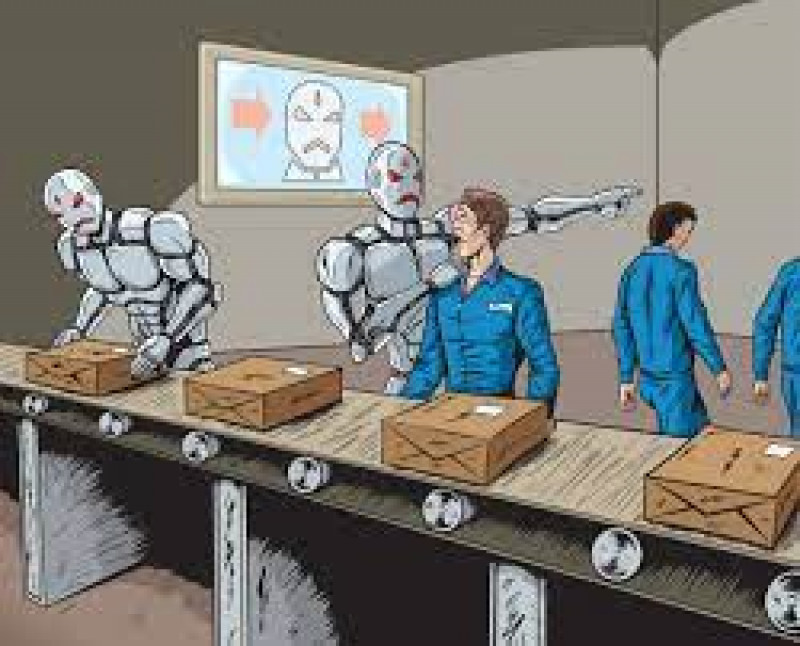 AI technology: breathtaking or our demise? For many of us we have never even seen a robot but their production is increasing and their employment is increasing as well which has been exacerbated by the Covd-19 Pandemic. Who will be the last race standing- AI or you?