I drive 30 miles twice a week to fulfill my dream ofbecoming Martha Stewart's worst nightmare through an interior design program at acommunity college. So, four times a week I drive by the new Broncos' stadium andam overcome with the need to vomit out of disgust for our society's fascinationwith overspending precious tax dollars. That's 16 times a month, 192 times a yearI feel the need to hurl all over the plastic dash of my little Barbie-esque GeoStorm because people who were voted into office think Astroturf is so importantthere needs to be a special tax to bring it to Denver, rather than using themoney to do something about the pathetic public school system (among a host ofother problems in the city).

I remember hearing the stadium tax issomething like one penny out of every 10 dollars. However meager this sounds, theprinciple remains the same: in too many Colorado schools, textbooks must bephotocopied or shared, teachers must use their own meager salaries to providenecessary supplies for students, etc. Not to mention that every day kids go homeand smoke pot, drop acid and have unprotected sex for lack of better things to dobecause there are no after-school programs within 45 miles of some middle andhigh schools.

It happens. I've been there. I went to an inner-city schoolfrom sixth through twelfth grade, and experienced the budget cuts and spendingshortages of some of the lesser-known school districts in Colorado. It's threegrown kids to a seat on buses. It's carrying home photocopies of The DivineComedy and Dracula and trying to decipher what kind of off-the-wall format theoffice assistant has copied them into. It's almost breaking your hand in weightsclass because the equipment is so old it often falls off the bar when you aretrying to spot your partner. It's sitting eight to a four-person table in thelibrary. It's having to stop painting class a month before the semester is overbecause there's no paint left and no money to buy more.

These problemsmay seem foreign and incomprehensible to those going to school in places likeLittleton where per-student spending is at a state high, but believe me, justbecause you can't see something doesn't mean it doesn't exist. Imagine what $300million could do for our schools. Perhaps it could help speed removal of all the"Welcome to Colorado, 49th in spending for public schools" bumperstickers adorning minivans all over the state.

Every weekend, millionsin the metro area and beyond gather around their TVs in eager anticipation ofanother week's rendition of professional football. Men who can barely run andwhose profitable careers are often marred by drug use, arrests and charges ofassault and spousal abuse are hailed as national heroes and earn hundreds ofmillions of dollars. In some parts of the country, kindergarten teachers withmaster's degrees are making little more than minimum wage, but a bunch of grownmen chasing a ball around a field of plastic grass get paid more than most inAmerica ever dream of. Among their undeniable athletic achievements, they areendowed with the fascinating ability to hypnotize drunken middle-aged men forhours at a time. Now that's what I call talent. Good thing there's that wholegender-wage gap going on or professional cheerleaders and Hooters waitressesmight be making six and seven figures.

I am often met with the argumentthat the masses would be seething with pent-up aggression and violence save forthe wonderful outlet of Monday Night Football and professional hockey games. Withall due respect, that is by far the most idiotic argument I have ever heard. Ifanything, professional sports increase violence. You've never seen a crowd riotafter a lovely evening at the opera, have you? It's funny how most riots happenafter soccer matches and hockey games. I don't know why on earth that happens ...Couldn't be because thousands of people just finished watching a band of overpaididiots beat each other about the head for three hours. Ironic how most peoplelike hockey games because of the fights and then many get in fights themselves inthe parking lot.

Perhaps one day society will value children more thanprofessional athletes. Perhaps some day the men and women who risk their livespulling drunk drivers out of icy rivers and waging the war on drugs in our innercities will gain more recognition than some fat guy who stands in left field allnight in a brightly lit stadium waiting for someone to hit a ball to him. When Iam unquestionable lord and master of the universe, it will be so. 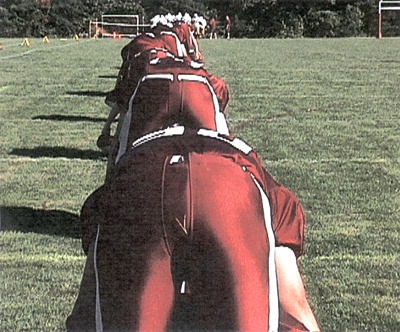