Threeyears ago, I received Teen, Teen People and Young and Modern (YM) in the mail.Two years ago I realized they were not for me. I didn't renew my subscriptions tothose "teen mags" because I thought they were superficial and didn'tapply to my life. To my surprise, I still find an issue of YM in my mailbox everymonth. It is completely uninvited, I tell myself. Why does it keep coming? Thebigger mystery is why, when I receive a new issue and scoff at the skinny covermodel, I read it. Cover to cover. Every month.

The only answer I can comeup with is that I look for beauty tips, hair tips and, of course, cute guys. Ilike to see what girls have done to humiliate themselves. And this is exactlywhat is wrong with teen magazines. I am proof because I, self-proclaimed hater ofteen magazines, read them for all the wrong reasons. I skip the emotional andinspirational stories about how girls overcome handicaps, peer pressure andhomophobic peers (possibly because they are tucked in between advertisements andhoroscopes) and flip straight to the celebrity section.

The superficialsections I read force me to ask myself questions I never would have asked: Whycan't my hair be that shiny? Why can't my boyfriend give me a rose for every daywe've been together on our two-week anniversary? Why can't my mom and I go out tolunch every Saturday and be best friends? The truth is, these glorifications ofteenage life are what attract teen girls to the magazines, and that is why I hatethem.

The magazines are unrealistic representations of teen life andsimply create more problems with their advice columns. Teen magazines, read bygirls across the country, send the wrong messages and contribute to theirreaders' emotional problems.

The biggest gripe that I have with teenmagazines is their representation of the female body. As I flip through thepages, I see scantily clad celebrities and models so thin that it looks like theonly food they have eaten is a celery stick.

As I leaf through, I comeacross the Britney Spears section, and I am shocked. Her shorts are so short theywould be inappropriate in a Nair commercial. The article focuses on when shedressed and acted like an angel, and other times when she dressed and acted likea devil. In both categories, she doesn't sport much clothing. What kind ofmessage is this giving to young girls? That to be successful like Britney, theyhave to have large chests, small bodies and wear next to nothing? While aself-confident girl could pass over this with disgust, a less confident one wouldstudy Britney's every physical feature and try to emulate her by dressing likeher or eating less to have her body. This could lead to an eating disorder orfeed an already-existing one.

These magazines contribute to the reasonwhy "five to ten percent of young women have a distorted body image and apreoccupation with becoming thin"(Encarta). They see their favorite starweighing in at 110 pounds (tops) and assume that is how they should look. Andanother reason girls want to look this way is to attract the opposite sex.

In every issue of every teen magazine I have seen there is a sectionbased on one of the things that is supposedly the main focus of girls' lives -boys. In Seventeen, one subhead states, "Turn his head with one of thesmooth moves that worked on these hotties." This statement practically begsfor criticism. First, it implies that girls need "smooth moves" toappeal to guys and that their personality is not enough. Second, the statementimplies that "smooth moves" should be tried on "hotties."This makes girls think that the only boys worth their time are good-looking ones,which again de-emphasizes the importance of personality. This is contradicted afew pages later when a boy advises a reader to be herself to attract a guybecause guys value personality over looks.

Boys are also in anotherimportant section of teen magazines: the sex and body section. In an issue of thenow-defunct Teen, there is a baseball field with the sexual metaphors for thebases. Instead of warning girls not to run the bases until they are ready, thearticle simply states the meaning of each and adds a cute, provocative ending foreach explanation. "Pucker Up," "Hey now!" and "Ohmy!" are the endings for the first three bases, but home plate says"It's called sex - perhaps you've heard of it?" I was shocked when Iread this because teen magazines don't usually address anything beyond kissing.In this "article" they didn't even warn about the risks of STDs orpregnancy. The article doesn't mention abstinence or even the risks of emotionalattachment. It simply glorifies the old metaphor.

Many experts (and men)wonder why girls care so much about how they look. The answer is buried deepwithin the pages of teen magazines. I counted the "glamour" pages infive magazines (not including fitness sections but including advertisements) andthe average was 47 percent of pages are devoted to making a (probably alreadybeautiful) girl look better.

Why? One might think that the editors dothis to help girls improve their self-esteem and self-confidence, but that is notthe case. They do it to sell products and start trends. What they might notrealize is that girls who desperately need confidence look to their magazine forguidance. These girls buy the products and become sheep in a flock of girls justlike them. Instead of giving girls more confidence and self-esteem, it takes awaytheir originality and makes them think that if they don't dress the way themagazine says to, they are not gorgeous.

However horrible I think teenmagazines are, they do have some worthwhile articles. Most preach safe sex(though they don't preach no sex), and there are some inspirational stories. Inthe advice columns, a few (not many) of the questions are answered with insight.

And as much as I complain about their superficiality, there is one pagein every teen magazine that I like: the fitness page with tips on how to get inshape and eat right, which I think is excellent.

The final thing aboutteen magazines that pleases me is the anti-drug advertising. Instead of thecigarette ads found in magazines for adults, teen mags often have powerfulanti-smoking and anti-drug ads that catch the eye and make a girl thinktwice.

Although I have dug through teen magazines to find the goodqualities, I didn't have to dig at all to find the superficial articles. Teenmagazines are materialistic and send the wrong messages to readers about bodyimage, glamour, boys and sex. I suppose, however, that if there are enough youngwomen like me, who understand the fallacies, we can skip what we don't like andfocus on the bits we enjoy. 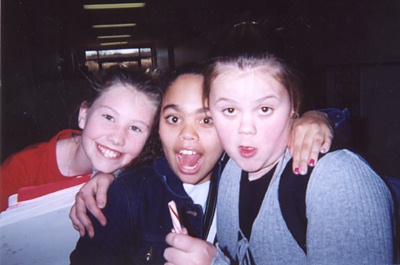