Americans are selfish. This is commonknowledge in many countries but I am just beginning to realize it. Over64 percent of Americans are overweight or obese while in othercountries, children die of starvation. We support and buy products fromcompanies that use child labor. Seventy percent of the world’spopulation is illiterate, and only one percent of the world’spopulation has a college education. Meanwhile, 81 percent of U.S.high-school graduates plan to attend a two- or four-yearcollege.

In 2004 it cost $37,928 to attend Harvard. Even forAmericans, that is a lot of money. Where better could that money go? Oneyear of Harvard tuition could feed 100 severely undernourished childrenat the AOET Orphanage in Uganda for almost 16 months. Harvard tuitionwould run the Startisa Orphanage in St. Petersburg for more than a year- that’s housing, feeding and educating 20 children.

Donating that money to UNICEF, you could prevent blindness for1,264,266 children by providing vitamin A; supply iodized saltto 758,560 children which would help prevent stunted physical and mentalgrowth for a year; provide lifesaving antibiotics for 126,426 childrenwith pneumonia; immunize 37,928 children against polio; send 10,114children to school for a year, or provide 253 wells which would assureentire villages access to clean water.

By donating through PlanUSA, you could sponsor five children for 20 years with theirvaccinations, immunizations, proper nutrition, clean water, schoolsupplies, money for household improvements, pre- and postnatal care fortheir mothers, and a savings credit for those children when they are oldenough. That’s Harvard tuition for one year. How many lives couldyou touch in four? How many more while in graduateschool?

Education has become our “American Dream.” Weview it as the door to success. With the proper education, you canbecome a doctor, lawyer or other esteemed professional providing youwith a comfortable lifestyle, including a comfortable house, with awhite picket fence, new car and family.

We dream that ourchildren will be stable enough not to have to worry about money, thatthey will have no trouble paying for their children to go to the sameIvy League school, and thus, this cycle will pass for generations as wereach for the top of the social ladder. We’ll surpass the wealthand become a family with “old money,” infinitely morewealthy and influential than people who are just “rich.”This invested money is security for our future and the future of ourfamily. This, in a nutshell is the “AmericanDream.”

Ironically, it is my education that has made merealize that there’s more to life than just me. I don’tbelieve in the “American Dream.” How can we justify spendinghundreds of thousands of dollars on education for one child when anothercan be sponsored and saved for a dollar a day? Education is a noblegoal, but our society has put it above more worthy goals. When it hasbecome more noble for one individual to go to an Ivy League school for ayear than to prevent a million children from becoming blind, we knowthat our “American Dream” has gone too far. Our“American Dream,” our selfishness, is wiping out the rest ofthe world.

Even though the “American Dream” is not mydream, I still believe in education. The Peace Corps won’t acceptvolunteers unless they’ve had a four-year college education,believing that people with advanced education are a more valuableresource. This is something I have come to accept. My “AmericanDream” is to go to college where I can better learn how to helppeople. My goal after college is to serve people, and maybe some day the“American Dream” won’t be exclusive to America. 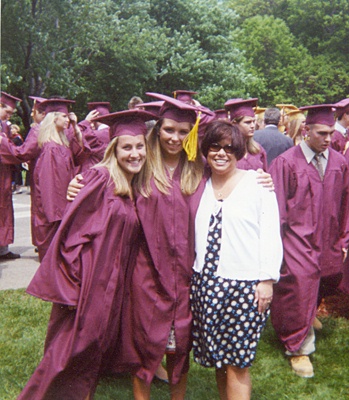 View profile
first i think most countries that are wealthy aren't that charitable. second harvard is beyond famous for being expensive what about the other colleges. thirdly america started and stil sponsers many charity organisations. also education is very important
lightningscar- BRONZE said...
on Oct. 12 2010 at 3:36 pm
lightningscar- BRONZE, Stratford, Other
3 articles 0 photos 32 comments

View profile
Education is important. Feeding starving children is important. May I suggest that maybe we could pay for our Post Secondary Education, and get sucsesful carrers, then we can donate parts of our income to less fortunate people.
lightningscar- BRONZE said...
on Oct. 12 2010 at 3:35 pm
lightningscar- BRONZE, Stratford, Other
3 articles 0 photos 32 comments

View profile
I see your point, and I somewhat agree. We should'nt compromise our livlihood, but, maybe we could spend money that doesn't go toward as important things such as college, and donate it instead. There are an endless amount of problems in the world, and we can't just think, because of this, we can't so this. That's like saying, "Who cares about animal abuse when their are children who are straving to death?" We can't jusst disregard other problems because other seemingly mroe important causees come into veiw. So, ya, I kinda agree. Just in a less agressive way.
MisplacedTexan14 said...
on Jan. 18 2010 at 3:33 pm
MisplacedTexan14, Saratoga, California
0 articles 0 photos 106 comments

Favorite Quote:
"If you can't stand behind our troops, feel free to stand in front of them."- a Bumper Sticker
"If Obama was the answer, it was a stupid question." - Another Bumper sticker

View profile
So we shouldn't go to college just because people in other countries can't? It's bad that Americans plan to attend college because other people can't read? Why is it bad that Americans have a good life? We do so much to help other nations, but we're bad because we want to go to college. People like you make no sense to me. Who helps out when natural disasters strike in other countries, like Haiti? AMERICA!!! The American dream isn't selfish. You are going to college, aren't you? You said your education helped you realize this. Why don't you use YOUR college money and help others, instead of just telling tohers to do so.
RYCKA said...
on Dec. 26 2008 at 11:23 pm
Hey this is a very good article! Not that many people realize these important issues. Some make it seem like its all fine and dandy, like they wrap it up in pretty wrapping paper with a bow on top, but these kind of articles should go to the public cause people need to know this. :)