The village reeks of arsenic-mixed well water, patterned goats, and loneliness. Very unlike our buzzing hometown, almost no one in this village is younger than 50. The town of Bargachhi, Nepal, has been this way – empty, desolate, and in desperate need of youthful minds – ever since our parents left here for “opportunities.” At least, that’s what my siblings and I used to think.

Spending the summer with our grandparents was not exactly at the top of our wishlists, but when our parents started showering us with buttered words and emotional blackmail (which they have mastered over the years), there was simply no arguing. The bus dropped us off in the middle of the highway. With our giant bags and city looks we made our way toward our grandparents’ small cottage by the side of the gravel road.

The climate in southeastern Nepal is usually hot enough to make you sweat even in the evenings, but that day thick cottony clouds prevented the heat from penetrating, and a fresh breeze kept us moving. The sight was a typical rural scene in the northern plains of the Ganges River: emerald green rice fields stretching as far as the eye could see, tiny cottages made of wood and roofed with tin, and carefree buffaloes resting by the side of the road.

The people here were obviously not accustomed to seeing teenagers roaming the streets, but we didn’t mind being stared at by locals. Some stopped us to ask about our parents (whom they had not seen for ages), and some even offered us evening tea. Finally, we reached the small red cottage behind the green yards – our home for the summer.

Our grandparents had already prepared dinner. After ceremonial namaskars, we had Grandma’s wonderful rice and lentils, grown in their fields. After dinner, Jaswi helped Grandma with the dishes, while Ravi and I followed Grandpa to the front yard.

The moon had already risen; it cast a pale silver glow on the tin sheets covering the cow sheds. A full moon indicated that it was a Bhajan evening, meaning the villagers would gather and sing religious hymns for hours. We adjusted straw carpets called sukuls around the yard, and after a lot of suppressed swearing and praying, we managed to start a fire in the yard, careful not to let it torch the soft grass. Despite our enthusiasm during the preparations, however, we were not looking forward to the hymns.

Slowly, the villagers began pouring in. Clad in exotic shades of red and green, the old men and women settled onto the little carpets we’d arranged for them, uttering soft Vedic verses. Some, in their hurry, had not even bothered to lock their houses; theft was not a concern here.

The holy sound of chanted “aums” blended with the cool air, a sign that the little concert was about to begin. My cousins and I prepared ourselves for hours of boredom. After all, none of us could recognize a single word in Sanskrit, and we assumed that all the hymns would be sung in the ancient language.

Grandma began the first song. To our great astonishment, it was in Nepali, our mother tongue. The melodious song was about Lord Shiva, the natural force for welfare and destruction, according to Hindu beliefs. The words, voiced with honesty and experience, cast soft blame on him for not causing rains soon enough, very much in the way parents scold naughty children. The next song was for Krishna, another revered deity of Hindus, teasing him about his affair with his girlfriend Radha.

As we listened, the songs began to sound more and more familiar until we finally came to another delightful realization: these hymns were, in fact, pop tunes that we all had on our cell phones! The lyrics, of course, had been cleverly replaced by our grandparents. The hymns suddenly became much more enjoyable, and Jaswi even joined the old women in their dance. The passion, creativity, and unfathomable energy these seniors possessed in their weathered bodies made us realize how age, indeed, is just a number. The words kept swimming through the cool night breeze for hours until finally the villagers began to leave for their houses. They would contain their excitement and vibrant aura until the next full moon.

As we helped Grandpa put away the sukuls, he complimented us on our energy; he confessed that he hadn’t expected us to participate in the Bhajan at all. We only smiled, and even as the fatigue in our bodies finally took us to bed that night, our hearts were full with sheer happiness. 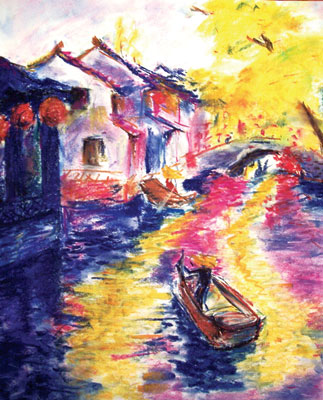 Now there may be a lot of errors that I do not see now, for which I must apologise. Hope you enjoy, and please do point out what you would change. Thanks.

View profile
As someone who has only recently discovered the joy of writing prose, I can't tell you valuable your critique is. I see what you mean, I'll try my best to avoid this in my future writings. Thanks!
Beila BRONZE said...
on Mar. 24 2015 at 9:50 pm
Beila BRONZE, Palo Alto, California
3 articles 0 photos 516 comments

View profile
I like your descriptive language here, especially in the first sentence. My only big critique is that I feel like you've rushed the ending. The story has a nice arc until you just drop the "age is a number" cliche and wrap it up very quickly. I would have loved to read a little more of the imagery you saw that night as you had this realization. Thank you for sharing this part of your culture!