Summertime has always been my favorite time of year, and this past summer I was so excited when my Grandpa Pete asked my family to come up to his cottage in Canada to help him work on it. It was kind of last notice, but I was up for anything. I’d already been to Canada twice before, and both times it had been a blast.
Around noon, my family and I were all packed up and ready to leave. My mom told me we were staying there for two nights, Monday and Tuesday night, and then we would leave on Wednesday during the day. I was totally psyched for the trip. We shuffled into the car, one by one, and headed for Tobermory.
The ride was a long boring 11 hours. I used my Dad’s laptop while we all listened to my Mom’s 80’s mixed CD. When we finally reached his cottage, after getting lost twice, it was around midnight. We were really exhausted and went right to bed.
The next day, when I woke up nobody was in the room anymore. I hurried downstairs to see where everyone was. My parents, sister, cousin and Grandpa were all eating breakfast while my Step-Grandma was washing some dishes. I sat down at the wooden table and grabbed a piece of toast and starting to spread butter onto it.
Later that day, my sister and I headed outside to take a walk. The cottage was right on the beach, so we walked down the rocky shore. The water was too cold to swim in, but we were okay with playing fetch with the dogs and putting our feet in. We spent all day outside. It was awesome. It was really cool to get away from everything that I’m used to like, computers, cell phones and television.
The next two days we did things like help set the table, roasted smores,
and we even tried skipping stones on the lake. It was really exciting and fun. I really love going to my Grandparents’ cottage and hope to go every summer for the years to come. 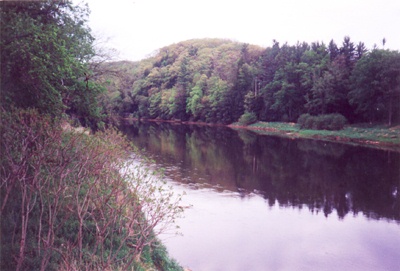