Setting foot on dry land after crossing the Strait of Gibraltar, the words that greeted me were “Bienvenue dans notre pays,” French for “Welcome to our country,” and above it, what I supposed was the same phrase in Arabic. I had arrived in Tangier, Morocco, a city of contradictions, a city where old meets new, Eastern culture meets Western culture, and Europe and Africa come very close to touching. I saw people dressed in traditional Muslim clothing, as well as women dressed in Western fashion. Our tour guide, a Moroccan man, wore traditional garb, but there were plenty of men in jeans or business suits as well. I saw big, square office buildings next to the green-tiled, domed roofs of mosques. I could see, on a bus ride through the city, that Morocco is a place where different worlds collide, so close to the Western world, yet still in Islamic North Africa. The disparities between North African culture and Western Europe or North America, however, are only a bit of what separates much of Morocco's population.

In and around Tangier, we rode a bus to see things like the place where the Atlantic Ocean meets the Mediterranean Sea, a sight which we all clamored to get pictures of despite the fact that it looked like any other bit of water to the left or right. We saw camels and mosques and goats and hotels and a gorgeous, sparkling blue ocean.

And then we passed the homes of the wealthy with their own private guards, the palatial homes of Middle Eastern royalty, oil tycoons, and wealthy diplomats. I was as amazed at the idea that these were single-family homes as anyone else, but I didn't think much of it until after the bus tour, when my tour group was to take a walking tour of the old part of Tangier.

Dusty, winding streets and a fresh ocean breeze marked my first impression of the city once I got off the bus with its filtered air. We walked from an open courtyard through streets filled with the chanting of children reciting the Quran in the school building, the scent of baking bread, the bright colors of the tailors' stalls full of men stitching yards of cloth into clothing, the flute a snakecharmer played, the calls of vendors trying to sell cheap souvenirs....Vendors whose ages ranged from wizened old men to small children who should have been in school, but who were instead trying to sell packs of gum to tourists.

When a four-year-old boy, dressed in tattered shorts and a t-shirt covered in the dust of the streets of Tangier, came up to me, held out a pack of gum, and said, “one Euro?,” that was the moment when I saw something was so clearly wrong. Half an hour ago, I'd been riding in an air-conditioned bus past homes that could have housed ten or twenty families but belonged to one. Here, just a couple miles away, were people crowded into apartments without running water, people who had to send their children out on the street to sell cheap jewelry and carved wooden camels to tourists.

Anyone who does not live under a rock knows that the world is unfair. We know that some people have nothing, and others have everything. I knew it, but it's one thing to know it and another thing to see it, to see it so close together. It's a shocking realization. Here, in our big houses with air-conditioning and plumbing, going to school every day, driving our cars, listening to our iPods, pulling out our credit cards when we need anything, we have no real understanding of the idea that some people have nothing compared to all of these things we fill our lives with. It's said that seeing is believing, and in my case, it really was true.

The shock didn't end there. I commented on it to a couple of the more well-traveled members of my tour group, my shock and sadness at these disparities. I was expecting a similar reaction to mine. Instead, what I got was a cold, unfeeling, “Oh, this is nothing. It's worse in a lot of places. You'll get used to it.”

That is a quote, because I will never be able to forget those words.

Apparently, I'm an idealist. Apparently, in the real world, idealism is pointless and there's nothing we can do except buy a pack of gum off a six-year-old. At least, that's what those seasoned travelers, those Westerners with enough disposable income or retirement savings to travel around the world, would have me believe. Maybe statistics say I should be just like them and harden my heart to all of the sadness in the world, but I can't do that.

Maybe I am an idealist. Maybe, if more people took idealism seriously, we could do something about all the problems in the world. I don't think that, out of all the days in my life, almost 6390 of them as I write this, one has ever changed me more. Now, when I see the world, I don't just think about how exciting it would be to see all the exotic places I've ever dreamed about. I think about all the people in those places who live in that reality every day, whatever it may be for them, and how many of them lack even what we would call the basic necessities. I think about those people who lived so close to vast, ostentatious displays of wealth but who lived without running water and whose children have to spend their days in the hot, dusty streets of Tangier peddling trinkets. I think about the cruel reaction of the others in that tour group, and I promise myself that I will not become indifferent to all of the suffering that goes on in the world every second of every day.


Right before getting on the bus that would take me back to my comfort zone of air conditioning, cars, and computers, I bought a cheap bracelet for three Euros. It didn't last long on my wrist before it became unjoined links of metal, but I keep a piece of it tacked up on my bulletin board to remind me of that day, if I ever get to the point where I feel like I can forget and go about my comfortably middle-class American life. 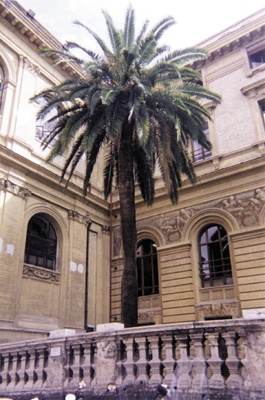