I anticipated looks of scorn from an expectedly all-haute crowd over my clashing wardrobe of an ethnic Michael Kors top with white jeans and floral sandals. I was worried that my artistic, vibrant, but not yet European high profile style would not exhibit my appreciation for the renowned connoisseur of fashion making a special appearance for the New York Times that night. Well, I was wrong, because although I could see that there were a couple of pious worshippers of the fashion gods present in stilettos and Dolce, the crowd was uniformly dressed on the casual side. This closet was more street-smart; one could recognize the dark-colored, funky garments endemic to New York. Lots of young people, 50% male, the other half female, a nice portion of the crowd most likely fashion students: designers, researchers, journalists abounded. My mom and I took our seats to the right of two beaming young men conversing about the show in a jargon that I was trying to comprehend without making it obvious that I was trying to listen in. At 15, I was probably the youngest attendee at the event.


This special seminar titled “What We Wear” was hosted by the Style section of The New York Times Magazine and is part of a series of Sunday affairs “With the Magazine” in which hedonists, epicures, and fashionistas, and just the hobby-oriented public alike flock together to watch interviews featuring prominent editors catching a few words with eminent pros in the fields of art, food, culture, and fashion. So maybe this wasn’t any kind of branch of Mercedes-Benz Fashion Week or the Costume Gala at the Met or anything of the sort, but fashion is my passion and reserving a seat near designers and fashion experts of the future even at a public event, was enthralling.


It was Donatella Versace! Before her grand entrance, (I was the only one who internally shrieked since I saw her as a celebrity…it seemed like the rest of the audience clapped as if they were happy to see an old friend rather than Versace the sensation) animated sketches of clothing and old family photos in black and white were oscillating on screens. The two rows of Press enthusiastically snapped shots of the mysterious pieces and figures, but I could not understand what they stood for.

I was surprised at how gracefully and calmly she ascended the stage, in those gargantuan pumps of hers. They must have been 9 inches: thick, chunky, and off-the-beaten-path fabulous. When Stefano Tonchi, the narrator and editor of T Style magazine asked Versace how many hours a day she thought she could last in those shoes, she replied “24.” Donatella sported a slinky, off the shoulder dress, matching the dark intensity of the pumps. I never saw it stop shimmering.


Tonchi carried himself with a poised charm on the stage and joked with Versace in their native Italian language; he was always prepared with fresh questions. Both had thick accents but both were natural conversationalists. Versace explained her passion for fashion from day one; it was “her life” since then. Her mother had been a pattern maker in the colorful, eclectic South of Italy and had taken her craft very seriously. In the South of Italy, Versace explained, women are very powerful. They put their creative talents to good use. Clothing gives confidence and security to the strong woman. However, Donatella considered herself to be shy growing up, almost recoiling from high fashion, because she “didn’t want people to come too close.”

But as she matured, she realized that her “DNA is still Versace” and she started to love the present and future trends and feelings. Donatella Versace works alongside contemporary artists, analyzing their work and learning new things about the “creative process.” The future is truly her inspiration, and Versace design could be seen as anything but nostalgic. She pointed out, “The company dies when you fall in love with the past.” The design virtuoso explained that the Versace family business is not about conforming. Tonchi commented, “We were all very scared of your sexy leather outfits.”

There were some sentimental moments around the touchy subject of Donatella Versace’s adored late brother Gianni. His head was in the clouds a lot; his heart was always bursting with color. Donatella stated that he was “very full of life.” Engrossed in style at a very young age as well, Gianni transported the bright and rather youthful shades of the Italian Riviera to Northern Milan, which displayed more realistic, neutral, and modish fashions. Donatella recalled that her brother would “always dress [her] up as a doll.”

The famed fashionista even had a few moments to talk about America. Versace shared a few insights on a variety of topics including American politics, the fashion industry, and her relationship with American celebrities. Versace talked a little bit about her relationship with Madonna, who takes care of Donatella’s daughter and is truly a ‘loyal’ friend. Versace left the audience roaring with laughter when she said, “Bush is a very simple man—his furniture, the china…” It sounded like the opposite of her brother, GianniVersace. She seemed to appreciate the strength of character in Hilary Clinton, whom she believes “does not have to wear trousers to show she is a strong woman.” Donatella believes [fashion] is America’s most important and growing market. She detests knock offs, and has always feared attempts to downgrade the fine family brand. When asked if she would ever consider designing a line for a store like Target, she replied “No.” The Versace business would not support knock offs, nor would it do any kind of price reductions of its exorbitantly priced pieces because it would be tainting a great legacy of haute couture. She noted that the family, from past generations, put hard work into promoting the brand as pure luxury. And the Versace family did not only seek pleasure in fashion, but also carried on a tradition of great food, drink, and entertainment. Her only response to an aspiring designer’s question about celebrity lines was “What were they thinking?”

Donatella Versace really marvels at today’s young designers. In fact, they are her role models. The designer stated that she often analyzes the work of new designers to “see what’s happening in the young world.” One of her hobbies includes traveling to cities where she can be amused by the energy of young people. Versace’s advice to young designers is simply “Follow your spirit.” And don’t be ashamed to display your creations, as Versace always wears her own clothes on the Red Carpet.

Versace also declared that [she] loves men. She is involved in creating men’s garments as well, proclaiming that the heart of masculine design is “a tailor.”

Finally, when Stefano the editor inquired of the dazzling fashionista how she would characterize the ideal Versace model, she responded with the 3 ‘F’s,’ “Free, Fearless, and Forceful.”

I found playing the fashion reporter a bit stressful, my fingers throbbing while I attempted to get down every point of Donatella Versace’s reflections of what really makes a genuine, evocative, stylish, and heartfelt brand. I could not grasp every last detail of the Versace legacy in the brilliant sphere of fashion; I had to laugh every once in awhile because she was very funny.

Donatella Versace’s runway sings an opera, yearning for freedom from the traditional. It does literally sing, though, seen in her collection video on home website www.versace.com. I can see models intensely glaring into space, being hangers for some metallic and wheat colored tunic dresses that bring neutral to a whole new stratum. There is this patent leather raincoat that only the flawless mannequin can flounce around in; it’s so vivid and rich in buckwheat that beams of light from camera lenses actually bounce off its corners. When Donatella transfers her wheat tones on the runway to bolder and warmer pinks and oranges, the pieces become even more down-to-earth picnic wear, which is not what I expected bold and bright to be. Playful cat-eye sunglasses freshly contrasted with the 50’s inspired blouse tucked into trouser shorts. Patterns ranged from water droplets to semi circles to spiky plants. Pink silk dresses looked like drapery and dazzled on the runway on the exotically made up models. I was blinded for a moment by the richest, most brazen sapphire blue I have ever seen. Many, many gowns in her collection video breezed and flowed as smoothly and lightly as the pure wind.

Donatella’s extraordinary accessories truly place her closet line in a league above other designers’ work. Purses range from chubby satin totes that have natural animal undertones or unique checkerboard patchwork to the heavily beaded or furred appearance in her clutches. Shoes were incredibly attention-grabbing, while refreshing and nature-like. Some were animal-inspired gladiators, some contained angel-hair-like straps that went far above the ankle. One spectacular pair was garnished with ribbon and jungle-esque bells as shoelaces. Belts contained knots and braids. I noticed that the shoes mainly looked as if they were painted in acrylic.

The strange cutouts of paper models in “What We Wear” and two dimensional fur coats projected on the auditorium screen at the start of the program were once just dreams on paper that became realities. The black and white photographs…just a royal family in the style kingdom. 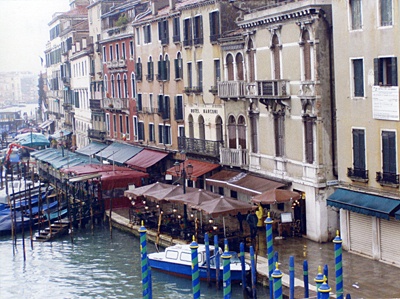 The author's comments:
She is an aspiring writer and loves poetry and journalism, particularly fashion journalism. She got very up close to Donatella Versace at a New York Times Style section sponsored event in Manhattan last spring and took on her own role as a member of the "press" by recording interesting remarks and quotes said by the famed designer (as well as T Style magazine Editor Tonchi) and vigorously taking notes in the form of a third person interview. She wants readers to realize fashion as an art form and the inspiration or muses in which renowned designers obtain their creative, nostalgic, lurid sense of color and material. She thinks that fashion is almost like a painting on a human silouhette, and insights to this complicated industry are just as enticing as insights to other forms of culture.
Post a comment
Submit your own