Last Christmas, I took a three-week trip to what the travel company called "Amazing Thailand" with my mom and aunt. It was a wonderful and exciting trip, although as a pampered American teenager, I was a little disgruntled about driving in a bus up the highways of Thailand, a little displeased with the less than five-star hotel with creaky rollaway beds, and a little cranky about our unsatisfactory tour guide Boeing (as in 747). Boeing, who was less fluent in English than he liked to admit, tended to mistake the meanings of our questions and would talk-talk-talk, earning him the nickname Boring Boeing.

In Thailand, there are many things to do, places to pray, and Buddhas to see. And although I found the first five temples and the first 27 golden, stone, and moss-covered Buddha statues fascinating, my interest waned when the tally marks on my "Buddha list" reached 45 - shopping was a bit more to my liking.

Given that, one hot January day my family and I decided to visit the famous Chatuchak market. The surly hotel manager informed us that taking public transport was the simplest way to get there. With relative ease we purchased our tickets and boarded the train, and I took for granted its cleanliness and state-of-the-art design. When my mom commented on the spotlessness, I remember saying, "Well, Bangkok is a modern city, right?" And it certainly is, complete with skyscrapers and lots of traffic and smog.

In stark contrast to the air-conditioned train, a gust of oppressively humid air blew into my face as I stepped off onto the platform. I was swept down the stairs by throngs of Thais and tourists, but between heads and city maps, I caught glimpses of shapes huddled on the floor and slumped against the wall. Naively, I wondered if they were burlap sacks and blocks of concrete; maybe they were fixing the sidewalk? Craning my neck, I suddenly realized that these shapes were people, some horribly crippled. My stomach turned. One boy lay unmoving and face down on the sidewalk, change cup at his ear, with only stumps for arms and legs. Women clutched children swaddled in rags to their breasts, scrawny little legs bent up to their chins; kids who would be in kindergarten or first grade if they lived in Los Angeles.

The sight of the malnourished children spurred many hands to dig deeper into their pockets. These were not your everyday Los Angeles homeless, bedecked in ancient Birkenstocks and pushing mutts in shopping carts. This was misfortune as I had never witnessed - disease and destitution of the very worst kind. It was my first encounter with impoverishment to this degree, and I have seen nothing like it since. I turned from the gut-wrenching sight only to meet a pair of dark eyes gleaming out of the wizened face of an old woman, her nose sunken, destroyed from leprosy. My ears rang with pleas and cries in a garbled mix of English and Thai: "Please, please, miss ... Thank you sir, sawasdee ... please ... "

The phrase "Time and tide wait for no man" could not have been more appropriate as the waves of people hurrying to get the market's best bargains surrounded me. Looking lost and feeling dizzy, I was swept off to the market gates. The rest of the day was fairly ordinary, right down to the overwhelming smell that I was beginning to get used to - the stench of fish, fish sauce, fish oil ... fish everything, you name it. I only felt a small but distinct and unfamiliar disquiet as I wandered the congested alleyways looking at crafts and fake Dior purses. The cries that echoed in my head were drowned by the merchants hustling their wares in a vigorous mix of sign language, Thai and occasional English phrases: "Very good price! Nice, nice bag! Cheap!"

When we left the market, I bent my head, ashamed of the packages in my arms, and hurried up to the platform without looking left or right. But I didn't have to look - it was as if the picture had been burned into my eyes. Back at our hotel, I tried to go to sleep, but instead I was haunted by a pair of dark eyes staring at me, dirty feet poking out of a torn baby blanket, and a boy lying face down on pavement.

For the rest of the trip, I tried to put the graphic images out of my mind and replace them with visions of parasailing and pad thai, but I did not succeed. This was different from the news flashes of starving Africans and kidnapped beauty queens to which I so easily turned a blind eye in favor of the new episode of "Friends."

Like Alice, I had fallen into a whole different world, but this was no Wonderland. There was no way I could have come out of that world back into my own sheltered one unscathed. And while I did not run home and immediately begin an altruistic charity campaign building hospitals, I was made indisputably more aware of the situation in other countries. The gap between the lives of most Americans and the extreme poverty of third-world countries is unfathomable until you witness it with your own eyes. I confess that I still occasionally feel a pang of envy when I see a classmate wearing a Prada dress straight off the runway, but the green-eyed monster can't compete with the images of the people in Thailand who get up every morning to beg for scraps because they have no choice.

And forever ingrained in my mind are the haunting images of a pair of dark eyes staring back at me, dirty feet poking out of a torn baby blanket, and a boy lying face down on pavement. 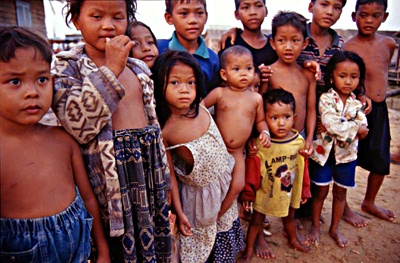