To Be or Not to Be MAG

When Dad arrived home from work Monday evening, I went outside to greet him.

"What's up, Squirt?" he asked, lifting his briefcase from the trunk.

"We need to talk," I replied tensely, recalling theconversation I'd had with Coach Kendoff.

My track team, the Peregrines,had been offered a spot in the county track competition. Coach Kendoff hadselected four, but if I wanted to go, we'd compete in the five-runner relay.

"Coach asked me to be anchor. That's the last person on a relayteam," I finished as we sat in the living room.

"Cool!"Dad said enthusiastically. "Looks like your big chance! You're going,right?"

"That's a riskany racer takes, I guess," Dad said, after a pause. "Just remember:never let your fears make your decisions. You make them."

A monthlater, I was in the car on my way to the county track competition. The day afterDad and I talked, I told Coach that I'd go. Now he was smiling as I joined myteammates.

"You're right on time. The five-runner relay is first.We'll be starting in 20 minutes."

Throughout warm-ups, my stomachsquirmed as if trying to escape. The water Coach handed me hardly did anything tosoothe my scratchy throat. All too soon, we were beginning.

"Pleasewelcome the Peregrines," the announcer boomed as Kerry, our first runner,trotted to the starting blocks.

"Don't look back whilerunning," Coach whispered as the other teams were introduced. "Do yourbest, and don't worry about how everyone else is doing."

The gun wentoff. The runners shot out of the starting blocks and the race began. I cheeredKerry as we gained a slight lead, then watched as the baton traveled to Kris, andthen onto Lynne. We were beginning to lose the lead. "Good luck," Iwhispered as Ash got ready. I felt a wave of dread. I was next.

We wereleading again, but barely. I watched as Ash neared the end of his lap and gotcloser. Breaking into a run, I stretched back my hand. As Ash drew up, I felt thebaton slap onto my palm. I grabbed it and ran faster.

Huh, Huh, Huh, Huh.I heard the heavy breathing of the racer behind me. As I rounded a bend, the footfalls behind me grew closer. My legs started burning. I rounded another bend, thesun beating on my back relentlessly. My breath was sharp and painful. Out of thecorner of my eye, I saw my opponent draw even. Entering the home stretch, theother runner suddenly pulled ahead.

No! Suddenly, in a burst ofadrenaline, I plunged forward with an explosion of speed. Focusing on the ribbon,I ignored everything else. It got closer. A sudden wind. My opponent? Oh, no!Then ... unh! I collapsed onto the ribbon, stumbling to the ground. Whoosh. Theother runner blew past, skidding to a stop, stunned.

"We won!"My team was sprinting over. Weakly, I walked off with my cheering teammates,feeling sweaty, exhausted and totally happy. We won!

Grinning, I lookedaround for Coach Kendoff, expecting to see her beaming and coming over tocongratulate us. Where is she? I wondered, confused. My eyes moved from the sideof the track to the stands.

Finally, I saw her in the shadows near thebleachers talking with two men. One was very formal looking, wearing a suit andthe other was a bitter-faced, middle-aged man wearing shorts. They were talkingin hushed, urgent voices. Coach Kendoff was frowning. My stomach cramped. Whatwas going on?

Coach turned to us as I jogged over with my teammates."This is Mr. Seward," she said, nodding toward the bitter-looking man."He coaches the Cheetahs, the team that came in second. He is demanding thatwe test all of you for drugs." I couldn't believe it. What kind of fool wasthis Seward guy?

The man in the suit cleared his throat. "I'm Mr.Randall. It's my job to organize the relay. The rules clearly state that anyonemay request a test of any participant. Come with me." He led our bewilderedgroup into the dim testing room. "All we need is a small blood sample fromeach of you. It will not take long." Oh, great, I thought as he came to mewith a needle. I closed my eyes and felt a pinch as it was stuck into myarm.

"It will take only a few minutes. If any foreign substance isdetected, we will hear beeping from this machine." I felt confident. I knewI hadn't taken anything.

"Not steroids," said Mr. Randall."Strange, this drug would actually hamper a runner'sperformance."

Mr. Randall sighed."I'm terribly sorry. The rules state that any drug detected in a runnerleads to disqualification. The Cheetahs will be announced thewinners."

"We won fair and square. It doesn't matter what anyoneelse says," Coach told us. I didn't feel happy. I never thought it would endthis way.

"Cheer up," a voice said. I jumped. It was my dad."Look, I know you're disappointed, but Coach is right! You won fair andsquare. You'll win next year. It's time to move on." He left me alone tothink about it. He was right. I went inside and joined the party. We knew thetruth, and that was what really mattered. 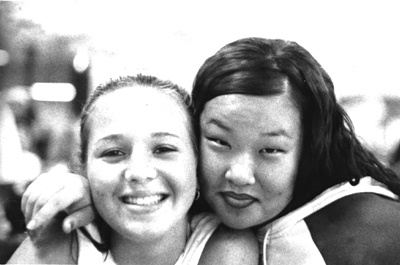