Chlorine is a Way of Life | Teen Ink

Chlorine is a Way of Life MAG

I stepped off the bus, as quiet as could be, concentrating on what I needed to do towin. The team turned the corner, and there it was - their school's 25 yards ofaquamarine water. I hate this pool, I thought. I've always hated this pool. Ireally do hate it, but probably because I hate their team, known for beingobnoxious, arrogant and fast.

I got dressed in my skin-tight jammers. Theother guys on the team had voted for these biker short-like suits rather than thegood ol' Speedo. I jumped in the water, amidst screams of "Oh man, it'sfreezing," and found it wasn't too bad. I started to warm up, and noticedthe sky getting gray.

"Let's pray for no thunder or lightning," I replied."This meet can't be canceled."

That's when I noticed heruneasiness. "What's wrong?" I asked.

She looked over at theother team and back at me. "Their 50-freestyle swimmer is talking trashabout you. He said you'd be a good swimmer if you didn't swim like a girl. Andhe's not only saying stuff about you, but everyone."

By this time,fellow swimmer Mandy came over. "Are you guys talking about that punk? He'sdisgusting! Terry, you'd better beat him."

My event was third. By that time, allmy friends had shown up and I was preparing for my 50-freestyle sprint. I walkedover to the blocks and began to prep myself.

"You think you actuallyhave a chance?" came a voice from my side. I turned and recognized the guyAshley and Mandy had pointed out. "Don't even try," hesaid.

Lucky for me, I was not alone. Ashley, Mandy and Debbie were closeby.

"My friend's gonna beat you," Ashley warned. "No oneinsults this guy and gets away with it."

"That's a goodone," the guy replied. "We'll settle this in the water."

Ihad not said a word, but this guy obviously did not like me. There is a reasonwhy, actually. The year before, I came into the league as a freshman and blew himout of the water. I could tell he didn't like to be beaten.

"Swimmersup," the official called. I stepped onto the starting block and prepared forthe race. That's when the rain started. I was dripping and could hear all myfriends cheering. I could barely hear the official. "Take your mark." Ibent down into my starting position, the chaos around me growing louder.

The starting gun fired, and I was soaring through the air and into thewater. Splash ... and then there was silence.

Let's go, Heinrich, Ithought. I began pumping my arms faster. Faster, I thought, go faster! I waspushing my limits. I grabbed a breath of air and headed for the wall. Ready ...flip ... turn ... go! I recited in my head. Out of the corner of my eye I saw theguy neck and neck with me. This'll be close, I thought. I came to the last fiveyards and sprinted with all I had left. Go, go, go, my brain yelled. I hit thewall and lifted my head at the exact same time as the other guy.

All Iheard was cheering. I looked around and nearly everyone, including the otherteam, was staring and pointing at me in amazement, which could mean only onething: I had won. I had won by an out-reach. I had touched the wall a splitsecond before he had. I glanced at the official, and he signalled that I had won.Yes, I screamed in my head. Mandy, Ashley and Debbie were jumping for joy. I didnot celebrate, it's not my style. I glanced over at the guy, who had a look ofhatred on his face.

"Hey, good swim," I said. I didn't botherlooking at him again as I pulled myself out of the pool, and into the raindrops. 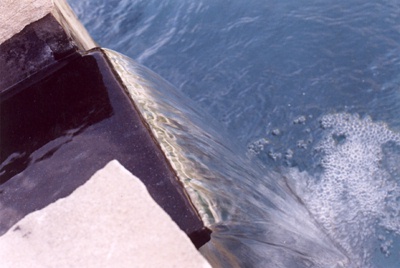