It was sunny, wait a second no it wasn’t. Actually, it was the middle of winter in Ann Arbor Michigan home of the Wolverines. Which is ironic because there are no wolverines in the state of Michigan. It was December 11th and I was anxious, more anxious than I had ever been. Well, maybe not I mean sitting waiting for the Top Thrill Dragster to drag you 420 feet travelling at 120 miles an hour may be comparable. It was the day before the end of my freshmen and sophomore sports careers. I wouldn’t be able to walk for at least two months maybe more.

The next morning I was starving; not being able to eat for eleven hours gets to you. I woke up and I was ready. I didn’t really know what I was getting myself into. I laid down on the operating table after three unsuccessful IV attempts so my arm was hurting. The doctor walked in and that is the last thing I remember.


I woke up around four o’clock in the afternoon after having surgery at six that morning. I was in a hospital room. I tried to sit up and instantly felt nauseous. I looked down and realized where I was. I fell back asleep.


The next day I woke up to a nurse taking blood from me, a practice I would get so used to they could literally do it in my sleep. My parents were in the room with me and they crowded me with questions. My nurse informed my doctor that I had woken up and shortly after he came in. He said the usual things such as you may feel nauseous and other helpful words of advice but one thing stuck out to me. He had said that I had heavy blood losses and that could lead to sickness and possibly needing a transfusion.


People came in to try and cheer me up but it was futile because I would see pictures of the basketball team with my friends on it back at home playing and I was stuck in a hospital bed with nothing to do. The nurses were very nice to me but didn’t have time to spend with me because there were higher risk patients there. I tried to keep myself busy but there is only a certain amount of things you can do to keep yourself busy by yourself.
The next day the nurses said it was time to get up and try and walk. My body disagreed with them and so did my head. My nausea increased substantially and I threw up trying to walk. This would go on for a few more days until I finally could get up and walk.


My sister had made me cookies, that was the only good thing that came from the night I had gotten home. I was tired and sore and bored plus, it was winter and I couldn’t go outside. I realized that I wouldn’t be able to play sports again, freshman or sophomore year because I was having the same thing done again. This fact pushed me to try and get better and stronger. The only problem was, I couldn’t walk. I lifted weights every day with my arms but strengthening my arms didn’t make me run any faster. When I could finally walk again, I started the long rehab process which was harder than anything I had done before. All I wanted to do was get back to what I loved, sports and the one thing the doctor said I couldn’t do for six months was sports. 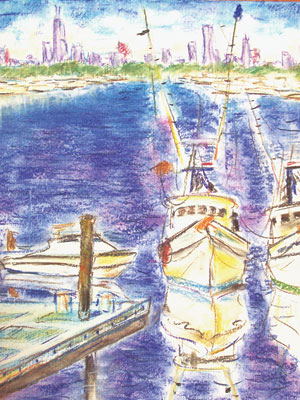