So there I am, going up the stairs with that disturbing painting of the guy and girl doing something not very school-appropriate and the mural of the naked woman, and I’m kind of freaking out, okay? I’m freaking out because I know by now that BOY gets out of geography when I come out of music and he goes down the Lit hall the same time as I do when I’m going to my locker.

So I’m hiding behind Micaela, which is actually pretty impressive considering Micaela’s rather shorter and rather thinner than I am, so I guess I’m just sort of walking behind her and pretending I’m not there. I try to convince myself that I can look up because he’s not here, except I can’t because I saw him at his locker before school, so unless there were some sort of extenuating circumstances like a UFO abduction or something then he’s probably gonna go down the hallway. So I drag my eyes up and I scan the hallway as I walk, hiding behind Micaela (well, sorta) but then – oh no! – she turns to open her locker and unwittingly strips me of my shield! Now I am bare for all the world to see!

So I duck my head and turn my lock around and I can’t even think about my combination because my head is so full of BOY, and I keep looking up unwillingly with a kind of dread-filled fascination, kind of like when someone pukes and you don’t want to look but you look anyway like your eyes have little eye-brains or something.

So he’s not there, and I let myself grab onto a little corner of hope that he went home or was called down to guidance so I won’t have to meet his eyes or say hi or whatever, but the hope is kind of sour and my heart is dropping a little because I’m disappointed, okay? I’m disappointed because I wait for these moments all day when I see his shape outlined against the crowd and he and I are the only ones in the hallway even though we’re not, and it’s that puke metaphor again even though that’s gross (I’d avoid it if I could but it’s a good metaphor), because I can’t decide whether or not I want to look but I always do whether I want to or not, because he’s BOY, obviously, jeez.

So I finally somehow manage to open my locker and I put my flute on the floor of it and my books on the shelf, and I take an abnormal amount of time getting my lunch out just so I don’t have to turn around, and I decide to take off my hoodie because it gives me more stalling time plus my T-shirt makes my boobs look good, but finally I can’t drag it out any longer and I have to turn around.
And there he is, halfway down the hall!

So there I am standing there in the middle of the hall looking stupid with no excuse and nowhere to run, and I’ve already shut my locker so I’ll just look like a retard if I go and open it again, and I start to make my way over to where Dorothy and Veronica and Molly and Sam are sitting on the other side of the hallway, but it feels more like they’re on the other side of the ocean.

So then I start to freak out all over again and I cross the epic ocean in a panic, sitting between Dorothy and Molly and pretending that I’m fine even though I’m not, like this is the first time this has happened which it’s not, it happens pretty much every day, and I’m staring at my bagel like it’s the most interesting thing in the world. Ever.

So there he is passing us, and I look up even though I really, really don’t want to (remember the puke theory? Fine, you don’t have to remember), and BOY catches my eye, and I’m cursing myself for being such an idiot and I just KNOW I’m blushing, I can feel it, and then he waves. A simple wave, that’s all, no big deal, so in a half-daze I wave back, even though my hand sort of feels like a dead fish, flopping, and as soon as he passes I launch into a jaunty conversation about music class, and Veronica says, “Are you okay?”

I laugh hysterically. “I’m fine. Just fine. Why would you ask?” 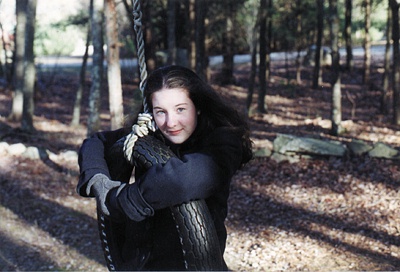 The author's comments:
This is a stream-of-consciousness piece I wrote way back in grade 9 (I just finished grade 11) but I think it's funny so I posted it now. It's completely true, by the way. Unfortunately.
Post a comment
Submit your own