Favorite Quote:
“I am no bird; and no net ensnares me: I am a free human being with an independent will.” - Charlotte Bronte, Jane Eyre

The fog. It rises. Over a field of dewy grass, over the greenhouses sheltering young plants in their pots -- the fog lifts, plays, and swirls through the summer air. Not one soul is up to see it making way for the sun, except for a little English Ivy potted in its brown habitat. The sun is now peering up from the edge of the world, where the twilight no longer can shade the colors of the land thriving beneath it, and the aura that emanates from this land is a breath of fresh air to the Ivy. It sits and waits for the gardener to sprinkle water through its roots. It sits and waits for the springtime sun. It sits and waits to grow. But it is hard to grow in a pot, in a little brown space made for other flowers, like Daisies, and Geraniums -- flowers built for barriers. The natural Ivy growing on the side of the greenhouse is wild, eccentric, and blooms wherever the wind will let it. But the potted English Ivy sits, and waits, for new leaves, for new space, for new attachment. It hugs closely to itself, thinking that if it can’t attach to the greenhouse, that it will hang onto something familiar. As lonely as little Ivy is, it is not alone. Potted plants line up on the sides of the greenhouse, some hanging, and some dwelling in bigger pots on the bed of the hut, but they all seem so far away. The potted English Ivy weeps during the rain. It longs to go outside and grow like the plants on the side of its home. It wants to love the greenhouse like the purple plants do, or to feel the cling of its jade webs slick and extensive somewhere else. But the brown pot encloses the English Ivy, capturing its tiny tears left over from the gardener, and sucks them up. It won’t let the Ivy go.

The rainy season is grey, dark, and unforgiving to lonely plants, but a spring morning cultivates the seeds of rebirth and serenity. The mundanes change, and become happier -- more willing -- as well as the herbs. So the English Ivy starts to change, and starts to ignore the looming barrier of the brown pot that once threatened its identity. A fortnight into a delicate April, the English Ivy wakes up outside! No longer does it feel the ceramic surrounding its roots, but rather the raw life of the Earth beneath it. The gardener was hesitant to move it, but with the season came a new feeling of hope for the little plant that started in the shelter of a greenhouse. But the Ivy doesn’t know how to grow outside. It doesn’t know how to be without barriers. It starts to wilt, even with the rod supporting its journey to the side of the greenhouse, next to the once loved clingy purple. Weeks pass and the gardener is close to snipping it.

The English Ivy wakes another day in mid-June, and feels the presence of what feels like the greenhouse. It is cool, and slick with the dew of a glorious morning, and bleeds a certain safety that is so immaculately unknown to the Ivy. After weeks of adjusting, and after a rock bottom in a place that seemed so joyful before, the Ivy attaches, and begins to blossom within its emerald ears. For months upon end, the growth is unlike anything that the land has seen. The love radiates between the English Ivy and the greenhouse. The summer shows it a new understanding of earthly beauty that has not been obtainable in rainy seasons. It clings, even with the heaviest gusts of winds, and is rigid when the gardener trims its growth. No longer will the looming greyness of the brown pot be the definition of the potted English Ivy. No longer will the rain keep love out of its treasury. And no longer will the sunrises be a reminder of the loneliness that the English Ivy has left in the swirling, rising fog. 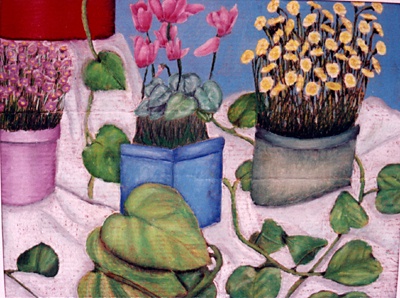 Here I personify English Ivy, a plant that latches to sides of houses and other buildings, to show how my struggle out of depression ended with me healing, and accepting new love and warmth that I once thought was not achievable.