It was a crisp spring day sometime in March of 2017 that I’d made a terrible mistake.  I sat crouched on my bed for about ten minutes, thinking. I let everything from the past few months crash down on me. I’d been trying to hide everything from everyone to seem “okay.” I was not okay though, and I knew it. I peered down at my hands, not knowing what to do. I didn’t cry. I just felt numb, like I was a shell without a soul. I knew I wanted to self-harm, but I didn’t want to cause myself more pain and keep existing; I wanted something new. I also knew I didn’t want to die, only to be discovered by my dad so he could see all the damage he’d done.

I began running through a list of all the choices I had. I didn’t like alcohol for it’s foul and acrid taste, so that was out of the question. I’d also already cut several times, and I didn’t want to endure the familiar sting on my skin. Finally, I recalled my dad has quite a few of health issues and has prescribed medicine. Overdose. As soon as I thought that word, I walked casually to the kitchen, making sure to seem like nothing was wrong, so no one would worry.  Mom and Dad were at work that day, and Cheyenne was at a friend’s house, meaning I only had to worry about my younger brother, Wyatt. Luckily, he sat watching TV in our small coffee-colored game room, so I only had to slip by, saying I would be getting some “food.”

Once I’d made it past him and into the kitchen, I headed straight for the Ibuprofen in our ancient oak cabinets. I didn’t falter as I filled a small glass with cool water and dumped about eight to ten small brick-red pills into my hand, downing two at a time.

After I finished all of them, I stood, paused for a few seconds, and reminisced about what I had just done. I still felt numb, and I knew I needed to do more since Ibuprofen wasn’t deadly.

I moved to my dad’s bathroom where he keeps all his prescription medicine. Opening the smooth pine-trimmed mirror cabinet, I took four bottles out and looked at the pills inside. The ones that looked larger, I placed back for fear of them getting stuck in my throat, and the rest I scanned the neon yellow warning labels. I don’t want to die; I don’t want to die, I kept thinking to myself as I flipped between bottles.

Quickly, I settled on two cylindrical bottles; one contained a popcorn yellowish pill that was long and ovular with some pill dust inside the bottle, the other was filled with smaller and thinner chalk white pills that had a faint steryl musk to them. Still convinced this was what I had to do, I took out the larger pills first, about four of them. I tossed them into my mouth first to get them down quicker.

When the tart pills entered my mouth, they started dissolving into a small fizz, causing me to quickly swallow them. Next, I turned to the circular chalky pills. Taking about two at a time, I downed all six before setting my hands on the counter and hanging my head. The pills quickly took affect as I raised my heavy head to look at myself in the mirror. My normally brighter eyes looked sluggish and dulled to me. I watched as my pupils grew to make my normally bronze eyes look more like an abyss.  “Probably just tired,” I murmured to myself.

I glanced back down at the bottles, debating on if I should take more. For a while I just stayed there, peering at my own reflection. I felt light headed, so I decided against taking more and just put all the pills back away where I’d found them and started sluggishly walking back to my room.

My legs became noodles as I trudged down our hallway to the bedrooms. The lightheadedness became steadily worse, and I felt dizzy. I quickly positioned myself onto the bed and wrapped myself in my silky cobalt blankets, suddenly hating everything I’d done. Cold reality hit me as I thought, I could die; I could actually die. It was the worst fear a person could ever experience.

As the day lugged on, my body began to burn like it was on fire and large beads of sweat seemed to coat my entire body. I couldn’t help the small whimpers that escaped me as my stomach and intestines felt like they were being crushed inside of me like a tin can. My head wouldn’t stop spinning, and it felt like I was slowly being ripped apart. All around me my pale ocean blue walls seemed to spin and twist, causing me to squeeze my eyes shut to try to ease the pain, only for it to do nothing.

It dragged on like this into the sleepless night until I woke up suddenly with my stomach feeling like it was being stabbed by dozens of little needles. I also felt my tongue turning numb and tingling, a sign I knew that meant I needed to get to the bathroom.

In a mad dash sprinting as best as my dizzy head would allow, I sprinted straight to the bathroom where everything re-appeared in a hacking mess with me crouched over the toilet. My throat burned as it all came up, but I ignored it and just allowed everything to come out.

Once nothing was left to throw up, I sat there for a few moments, trying to get my bearings back. My throat felt rough like sandpaper as I kept my spinning head angled down, but through my squinted eyes, I noticed a familiar yellow dusting hidden inside the slimy mess. My breath caught in my throat as I instantly recognized those yellow pills I had ingested earlier. A wave of relief washed over me as I felt a little better knowing some of it was out of my system.

As I waddled my way back to bed after cleaning up, it became clear to me that this was just the beginning of a long torturous week. The next two days were filled with the most excruciating pain a person could feel. I kept muttering, “Just get out,” over and over, demanding that the foreign objects inside of me just leave.

After everything had left and I felt better enough to stand without feeling dizzy, I trudged back to school like nothing had ever happened, and when my parents had questioned what was wrong, I waved it off as “I wasn’t feeling good.”

Ever since that horrid day, I vowed never to let myself be that stupid again. It just wasn’t worth it to me, nor my family when they found out.  To this day, I live with the guilt of my mistake. 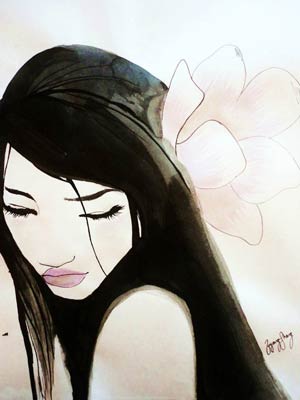