The gentle summer breeze was brushing against Vera’s tanned face as the word “parasailing” ringed between her ears. Such a strange yet familiar word rushed a feeling of nervousness and fear inside her. Vera’s swimwear reflected a darker shade of the sea’s bright colors, in contrast to her brother’s yellow swimwear with black stripes. Her dad handed the payment to the manager. She started worrying: parasailing seemed like a big step for a 12 year old. What if something went wrong? What if the parachute didn’t work as promised? Hundreds of thoughts raced inside of her mind. But she ignored them. She tried to ignore them. Without realizing it, Vera was already standing on the white boat with a blue stripe which whirled against it. The tall shadow of two large lifeguards stood before her, accompanied by her mom and Martin’s, their close friend. The boat started moving slowly as it migrated into a faster rate. The two lifeguards put a red life vest around them, its tightness felt like a python going around her, squeezing her with greed. She wasn’t sure whether she should keep it that tight for safety, or loosen it in comfort with a small sense of risk.

“Can you loosen it more, please?” Vera decided to say in Turkish.

The men nodded their heads and did as told, leaving Vera in a more comfortable position. She stood there… waiting for something to happen and, in a blink of an eye, they let the rainbow-colored parachute pull them away into the fresh summer air. Her, Beren’s and Martin’s screams seemed to fade away compared to the boisterous roaring of the wind. It lifted them up into the turquoise sky, increasing with a tremendous speed. Soon, their frightened screams turned into sparkling laughters. It was so high up… too high up. But the breathtaking view of the beach mesmerized her attention, leaving her fears behind. It’s so beautiful Vera thought to herself. The sea revealed its different shades: its light teal shifted into a shade and depth of dark indigo which fascinated her. Every person seemed small, like ants operating on the pale white sand. Some parts included emerald trees which stood out from the white terrace of the resort. This moment felt like her moment, a moment which was soon shattered by Martin and her brother discussing something.

“What?” she yelled. They were trying to converse but could not hear each other from the sharp noises which the wind made. As they stopped yelling, from the realization that nothing was heard, Vera started moving her legs in the same rhythm of the wind shouting the emotions of joy and excitement which circulated inside her. Then, everything started looking larger. Vera understood that it was time. The parachute was slowly moving down toward the ship, getting pulled closer and closer to it. In a very short moment, Vera found herself sitting in the same position as she did in the beginning, when it all started. The lifeguards were loosening their life jacket and straps until the boat started moving and they could finally walk around freely. Both of their moms were eagerly storming hundreds of questions directed at them.

“It was fun” Vera shrugged. But there was more to that. It was an amazing moment which Vera got to share with her friends. She regretted worrying in the beginning, it seemed so useless in contrast to the great fun which they had. If there was one thing she learned from this experience, it was that you should face your fears and not let them affect how you live your life. And so, Vera went on to telling all her friends and family the fascinating details of parasailing: such a strange word which struck a deep message and feeling of joy inside her. 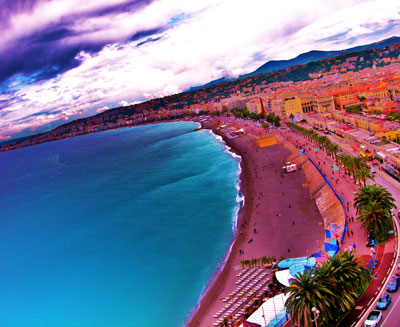 The personal experience of a close friend of mine.