I used to go to this park a lot.
It was pretty big, I guess. But, to a toddler, everything would’ve seemed big.
I used to go there a few times a week, one or two hours before sundown. The park was mainly used by a bunch of minority groups -- hispanics, african americans etc.
Every time that I went there, I never saw the same face. There was, however,  a great chance that most of the people there, was there the evening prior. It was odd how someone like me, who visited the park on a regular basis, saw strangers in the eyes of familiars. But, I never seemed to remember any of them.
There was, however one girl that I had always seemed to remember.
When I saw her I was a little confused. She was different, I guess you could say.
She wasn’t facing me. Her head was turned to face a dusty - colored red jeep, so I could barely see what her face looked like, but  she had a sort of pale white face and auburn brown hair cut short, similar to a pixie cut. She was probably around sixteen or seventeen of age. And just like a normal teenager, she wore denim shorts and an off white, a little see through, t-shirt that hung loosely on her body. A skinny frame.
As I passed her, I could hear a very faint recurring clicking noise. tch, tch, tch. Repeat, repeat, repeat.
At that moment, I really didn’t know what was producing that noise. All I knew was that the girl kept doing something, and desperately wanted to do it for that, even though she kept messing up. The clicking noise kept on going, even after I walked passed her.
But, suddenly, the noise stopped. Perhaps she had given up, I had thought. And after a few steps, there was this strangely familiar scent.
It was the smell of the city, and the dark alleys in between. Of the ditches in the ground and the sewers where cigarettes were thrown. Back paths through the brick walls, and behind a locked bathroom doors at a public school, alone.
Unseen.
It was a familiar scent, but still felt new with each breath I had inhaled.
Soon the scent was gone. I looked back, expecting the girl to have left, but the girl was still lingering behind the red jeep that wasn’t hers, like the smoke above her head. Ah, I thought, she didn’t stop because she gave up.
Relief. That was it.
Besides me, stood a weathered-down old tree. Leaves hung loosely. It’s insides gorged out. Splinters. Scratches. Holes.
And then, a skinny frame. 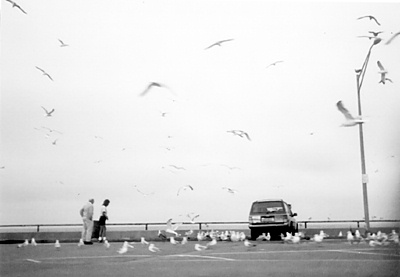