The downhill march was led by Adam, and he stopped all the time to remark on this tree or that. On our first water break, ten minutes in, we were ushered on by Sandra because we had to make good time to reach school by two. At the stop, Cody had stopped to put his jacket away and ended up behind me. I couldn't take to the hills at my own speed now, with an expectant hiker behind me, and one behind me who was used to being in the front of the group. I was behind Rosalind, who paused often to grab her knees and catch her breath, and I almost felt defensive of her, like if Cody were to say anything regarding her speed I'd snap at him without hesitation. Every so often I'd see him out of the corner of my eye, trying to get a path around, but even when I paused for a moment, to see if he would finally just pass me, he held back. I knew in this situation, he was the desire, I was the opportunity, but if he wouldn't take the opportunity I was no longer responsible. I pondered pausing and telling him he could get in front of me if he wanted, which would add up to eleven words I'd said to him in total (including seventh grade), but I didn't. I wasn't keen on talking to some of the girls, any of the boys, and certainly not Cody.

All the fast hiking down must have adapted my legs somewhat to the terrain, for if I stopped and stood, my leg started shaking horribly. My hands were dirty, and when I smelled them, they smelled oddly like potato skins.

I ended up at the back of the students toward the later part of the hike, and with Rosalind far enough ahead and Sandra and Ron far enough behind, I stopped a moment to take a few pictures. I heard Sandra call my name then, and I turned to look at her, curious.
"You stopping to take pictures, to enjoy that moment, it makes me smile," Sandra said. I ducked my head. I took pictures all the time; it wasn't much of anything to be proud of, in any case.

"Would you mind if I took a picture of you with your camera?" Ron asked.
"No, I wouldn't mind. I would like that very much, actually."
"Because it's important to get a picture of you, and you're taking all these pictures of everything."

Of course, this boosted my confidence and I stopped and took picture after picture of flowers and leaves and trees and whatnot. I'm pretty sure Sandra was getting annoyed at that point by me stopping all the time. It couldn't have possibly made her smile to be stopping every five seconds.

Episode Seven: The Taste of Closeness

As the hour passed, I recognized certain crossings and the openness and being able to see the mountains. We were so close, I could nearly taste it. I felt it with every nerve. I realized, this is hope. Hope is what drives you around the next bend, over the next river crossing, through the next mountain pass. Hope gets you where you need to go. I felt so close, I knew I could tirelessly trek as far as we needed to go, just on that little bit of feeling.

As we walked on, the feeling of closeness started to die off. We were hiking and hiking and hiking, now at least on asphalt, past groups of people here and there, camped on the side of the road, cooking this, sitting in lawn chairs, doing that. Everyone waved to us, asked what we were doing, all of us in a big group with giant backpacks. I saw, as I was passing, a man sitting in a chair playing an accordion, of all things. Lila and Gracie or another combination of those girls (the four) laughed a bit as they passed, but I watched in amazement, only disappointed that I hadn't got him on camera.

Episode Nine: Back to the Cars

Finally, after all of that hiking down the asphalt, we saw the cars. If I had had the energy, I would've sprinted the final length, but I could reel in my relief with the same pace I was walking at. Granola bars were passed around, people deciding to be in the same cars but the boys in our car wanting the middle row for a change. I had a Kudos bar with Dove, and people were trying to find the tortillas and the peanut butter and all of that. Cody remembered he had had the tortillas, but he had put his pack in the trailer early on, and we all laughed because of that. When he finally got the tortillas, I didn't take one (he was holding them the whole time, and I at least respected the five-foot rule I had come up with); it was bad enough the first time I had hogged the tortillas.

Episode Ten: "Home is Where You Make It"

Ron called us all in a circle, and asked us each to say one thing that we learned on the trip. I passed the first time, thinking. Most people just said stuff like "how much iodine to put in a liter of water", "how to cook food when you're camping", "not to step on rocks", and other trivial stuff like that. He came to me and I said, "Home is where you make it." "Wow, that's deep," Ron said, and went on to the next people. I looked at my feet with a smile. "Deep," I repeated. Indeed, that was my intention. Obviously I had learned much more than how many drops of iodine to use in purifying creek water. 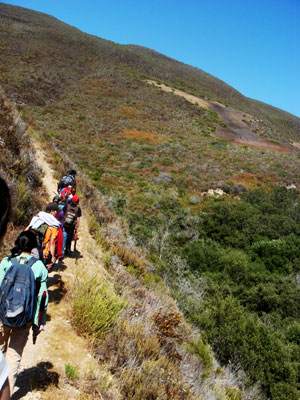 The author's comments:
This is a series of anecdotes toward the end of my ninth-grade school camping trip.
Post a comment
Submit your own

Favorite Quote:
"A hospital bed is like a taxi with the meter running"
-Anonymous