The air is stifling. It hurts to breathe. But that's nothing unusual in August, not on the outskirts of Tel Aviv-Yafo. The sun blazes. We sweat rivers down the sides of our faces, and lakes on our upper lips. Eventually, we pardon and squeeze our way into a patch of shade near the wall of the drafting center.

Alon is drinking a diet coke, a rather poignant sign of how upside-down everything is. He once claimed he can not only taste, but also smell the difference between diet and regular, and that even thinking about diet makes him sick. He is utterly unaware of everything around him. Our hands are still clasped, as they have been for the whole car ride and the past agonizing thirty minutes in this place. Our fingers are woven together like the threads of an army uniform--much like the one he will be wearing within the hour. But we are no longer young, and playful and in love. Now he is drowning in a thundering river and clinging to me, the only log in the water. That's how his grip feels.

This moment is brimming with traditions and expectations. It represents centuries of political upheaval and controversy. But we are not thinking about politics, right-wing, or left. Being drafted is personal. It is the pain of growing up too suddenly. It is a sacrifice that I cannot grasp.

He brushes his free hand over the dark bristly strands on his scalp. They are perhaps a centimeter long. Twenty four hours ago, I was laughing and running my fingers through his hair. His long, messy, bewitchingly soft hair.

I made Shohko, I announce triumphantly, two glasses of chocolate milk slushies in my hand. It's--I catch sight of his stricken face. What!?
I forgot, he says bleakly, I completely forgot. I have to cut my hair before tomorrow.
Cut your hair...I repeat, uncomprehending.
You know--he pushes back his bangs and mimes moving a razor over his head. For the--well, they have regulations. Everyone has to get their hair cut, at least in the beginning. Really short.
Shit, I say, Seriously? He smiles without humor.
Wanna come watch? I do not. I do not want to sit quietly and watch the beloved floppy mane get shorn into a prickly helmet. But I know he wants me to come. So I do it for him.

With each feathery tuft that sinks to the linoleum floor, it becomes harder to keep silent, not to yell Stop, stop, stop it! I can not bring myself to look at Alon's face in the mirror. I do not want to see the face I know on top of those slumping, defeated shoulders, in front of the dome of dark stubble on his scalp. He turns to look at me when it is all finished, and his face is a mask of anguish that I want to rip away.

Outside, we sit wordlessly on a the curb of a sidewalk, stalling because Alon does not want to go home and face his parents, who will gush over him and tell him how much he looks like a soldier, how brave and how grown up he appears. I hate his hair. He hates it even more.

I don't give a fuck, I tell him finally. Aloni, you know I don't give a fuck about the hair.
I know. His tone is listless and he does not look at me. It's not really that. And he's right. It isn't. I begin to cry.

It seems stupid, even childish to grieve over a haircut. I am fully aware that hair grows back. But this haircut can not be undone. The sad wisps littering the floor of the barbershop are gone. They are not coming back.

I am reeling in the strange awfulness of this moment, but it is not a shock. It has been roughly one year that Alon and I have known each other, and roughly one year that I have known he will be drafted. My mind flies back to our first few conversations when we met on our teen tour of Israel and the United States. I asked him where he wanted to go to college (he was seventeen--if he were American, he would have had at least some general notion).
No idea, really, he said unconcernedly.
You haven't though about it at all!?
Well, it's going to be years before I have to apply. The army comes first. Next year. You know. I felt a flicker of panic, even then. But next year was light years away. So I pushed it out of my mind.

I had even known the exact date of his drafting before coming to visit him. But something had to give, I convinced myself, something was going to happen to change everything, because the thought of Alon leaving was not awful--it was impossible.

He sits beside me on the curb, and I feel his heartbeat in his fingertips. But, as his hair announces, he isn't mine anymore. He is here, but I finally understand that they have already taken him away.

The bus carrying the previous batch of recruits pulls away from the other side of the Bakum, amid a flurry of dust and gravel and confetti and shouting and crying. With equal parts dread and anticipation, I check the flashing sign for his name in hebrew. A realization surfaces that terrifies me: I want his name to be up there. This eternal, this excruciating waiting is more than I can bear. Let it be over. Let me start grieving. I am worn out from the suspense, and I just want it to be done.

And there it is. In flashing, blinking, red letters. Big and official.

Is it there? He asks.
Yes, I say. Left side. Near the bottom.
He looks at it, then he looks at me, then he puts his head in his hands. I am at an utter loss for anything to say.

Alon's father Barak slings his son's packed bag over his own shoulder, the small, zippered navy backpack that holds only a tooth brush and underwear and the few other things they won't give him at the base. Tsufi, his mother, stands next to me. Her face is half hidden by her sun glasses. People who don't know her well say she is cold and distant. Only the trembling of her mouth gives her away. You have to know what to look for.

We make our way into the middle of the seething crowd, just feet in front of the bus. There is nothing I want to ask out loud, but hundreds of things I want to know. What are you thinking, my love? Can't you smile, just once? Can't you feel my hand holding yours?

Why do you look at my face and not know who I am?

He hugs his father briefly, pats his brother on the back, shakes hands with his friends. He and his mother embrace for longer, but only because she does not let him go. He holds me for nearly a minute. I rest my head against the smoothness of his freshly-shaven cheek. My hands tremblingly rise and touch his shoulders. All compulsory actions, though I memorize them as best I can. I feel like a hollow wooden doll.

His kisses me once, twice. Gently. Have a safe flight back, he says. I'll miss you.
I'll miss you too. I say. You'll be fine.
We might as well be vague acquaintances, or business partners. Or people in the same biology class. This is not the person who constantly sings "Carry on Wayward Son" at the top of his lungs in the car, and insists that it is our song. Not the one who spent twenty minutes trying to "dip" me properly while we were dancing, like they do in the movies. Not the one who knows the exact spot behind my knee where I am ticklish.

Alon is waiting for me back at his home now, I am sure. It is this miserable, silent, stubble-haired boy--no, this man--who is leaving. I will tell Alon all about this man when we are sitting in the hammock drinking Shohko in the shade.

But as he boards the bus, and looks back at us for the last time, this strange man sticks his tongue out at me. Just the way Alon always does. He is there, somewhere behind the shorn hair and the vacant expression. In a matter of seconds, the bus roars away and Alon The Soldier is gone.

I link arms with his parents and brother, all of whom are crying. I want to cry, I feel that I ought to cry, but the sun burns above me and the tears don't come. Because, as I realize, this moment is not the start of the grieving. That has begun long, long ago. Before the haircut, even before this trip, however valiantly I fought not to believe it. I have known for nearly a year that our blissful time together has an expiration date. This is the end of the waiting, the moment of acceptance. So what is beginning now? A part of Alon's life--and mine as well--that is entirely new.

We leave the Bakum the way one leaves a cemetery. Broken hearted, and free. 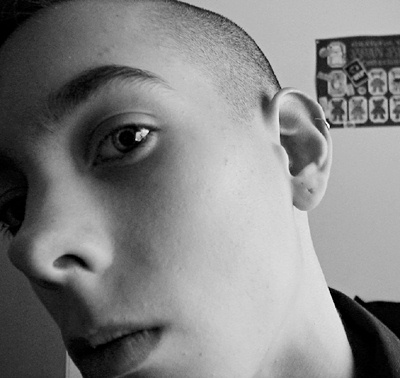