A Mountain to Me, a Molehill to You | Teen Ink

A Mountain to Me, a Molehill to You

Favorite Quote:
When I let go of who I am, I become what I might be

To me, the world seems to big to comprehend. Although, in rare convenient moments, I find myself sometimes cursing the world for it’s smallness. I marvel at the idea that there are over six billion more human beings on this planet with problems and joys just like mine. I marvel at the idea that 99.9% of those people don’t care about my problems, even though to be the seem to be the most monumental things in the world.

Habitually, I always seem to find myself to break issues of the world apart into manageable pieces. Whether it has to do with faith, my own problems, or problems of the world, their are two categories they separate into: things I need to think worry or things that I don’t need to worry about. Rumor that could alter my reputation? Something impossible not to worry about. Story on CNN about an earth quake in China that killed many, injured even more, and destroyed homes? I view it with empty eyes, only feeling momentarily a pang of sadness. Something I don’t need to worry about.

Looking at the facts, it makes me feel selfish and makes me appear selfish, but it’s human nature. It’s easy to think of the things that directly affect me and my well being, even if it isn’t affecting anybody else. Even if an earthquake is breaking up families, I never offer it more then a moment of thought. It seems like something so far away and something that doesn’t pertain to me, even if it pertains to thousands of others.

When I am in a fight with somebody close to me, sometimes it seems like the most important thing in the world to me. When the other person doesn’t treat it that way, I am quick to become angry and frustrated. How could something so important to me be treated with so little care? Then I remember, something that means so much to me, only means a small fragment to others. A woman crying as she stands on the remains of her home only means to me what any other picture of despair shown of national television means to me, next to nothing.

At the end of the day human beings are the most selfish creatures on the planet, offering others only sympathy in some situations and cruelty in others. As I walk slowly down the streets of a big city, passing different faces I think of this often. The demeanor of their eyes, the curve of their lips do not give away their issues and problems of their lives. What is this person going through? To them, my issues are just another thing to forget. To me, my issues are something I will wrestle with for the rest of my life.

To even my best friends, I forget that I am not the big piece of importance I think I am. Sometimes their behavior has nothing to do with my actions. I twist and turn some days, looking over everything I have done with in a span of time to recall what I did to hurt them in some way. I stress over the loss of connection I feel at times with some of my oldest friends. I concern myself to death with something that most often has nothing to do with me.

With what seems out of out my own self importance, I question, “Does so and so think of me?”. In all honesty, my question can probably be answered easily, no.

I can picture my father with his thinning sandy blonde head, his blue eyes dull with a certain graveness telling me his favorite saying I strive to keep in mind, “We are all just an extra in somebody else’s play.” 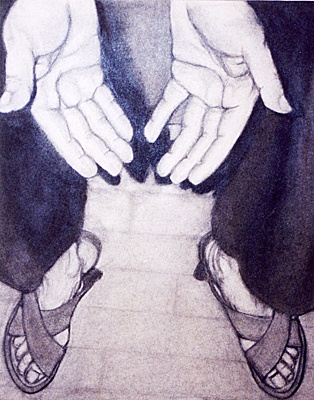