“Has anyone seen my clothes!?” I desperately demand, while my eyes scour the empty, black abyss of my gym locker. No response. Great! Here I am, standing in a puddle of water and confusion, with only a thin towel preventing a criminal school dress code offense. The clock chuckles, its hands indicating two minutes until the bell rings, and there is absolutely no way I am venturing into the hallways and chemistry class in this condition. I am in a bit of a pickle here, and in situations like these I can only sigh and turn to the almighty Jane Eyre for guidance.

Come to think of it, the unfortunate reality at hand is similar to Jane’s escape from Mr. Rochester in which she finds herself penniless, lost, starving, and nearly dying of exhaustion. I may not exactly be lost or starving, nor am I approaching death, but I am lacking clothes. What would Jane do? I ask myself, and not for the first time. In fact, Charlotte Bronte’s protagonist has guided me through countless troublesome times. Jane, when she was a mere child, vehemently captured my heart and mind and has refused to abandon me since.

Jane Eyre drastically differs from the typical literary heroine of the time. Under the pseudonym of Currer Bell in 1847, Charlotte Bronte broke new ground introducing the self-righteous and morally defiant “poor, plain, and little” Jane. After enduring unjust hardships, Jane prevails in the end and all the time remains true to herself.

Her example reminds me on a daily basis never to compromise your morals and self-respect when tempted by a simpler route: whether the dilemma is betraying my vegetarian vow, disposing of litter while walking outside, or giving up on the last mile of a run. The satisfying life Jane achieves by the end (married - with her independence still intact) encourages me to have faith and to be the creator of my own reality and contentment.

Jane relies on her education to make a living, and her intellect as well as honesty appeal to Mr. Rochester, her eventual husband. Her qualities were in opposition to the established nineteenth century female’s allure (beauty, wealth, and submissiveness).

Even as a young child, Jane rebels against the stereotype of a malleable Victorian girl. When threatened with the possibility of Hell, young Jane confronts the daunting and fearfully religious Mr. Brocklehurst with wit and candor, informing him that in order to ward off Hell, one must avoid death. Jane’s courage and confidence have always served as an inspiration.

Taking a quick glance at female high school students, I find too many marked by low self-esteem, in some cases to a debilitating degree. At times, I myself can be found among this crowd, but Jane never allows me to remain there long. She is a woman of determination, intellect, and (as Mr. Rochester would say) originality. She certainly does not permit her shortcomings to stand in the way of happiness or to weaken her; and her precedence prevents me from acting otherwise. Instead I look to Jane, brainstorm my positive qualities, and when in doubt, rely on honesty and education to overcome any obstacle.

Now, enveloped in a cloud of unholy odor emanating from my thoroughly worn gym clothes, I attempt to possess resolution. I know that if Jane were in this situation, she would carry on to her next class gratefully, without a thought of impeding her education. The bell rings, and with a sigh I follow in the footsteps of my secret mentor, the very courageous Jane Eyre. I open the locker room door and walk undauntedly to chemistry class. 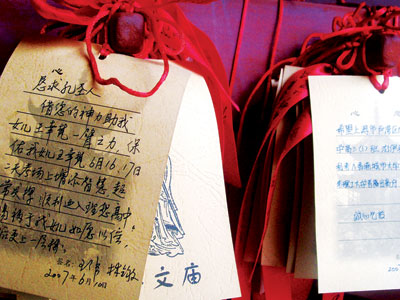 Favorite Quote:
" I still belive, in spite of everything, people are truly good at heart."

View profile
It is encouraging to know that young women like Jane Eyre still exist with a heart as wide as a freedom's reign. With the ability to love and learn with a heart and a mind.