Of Magics and Myths | Teen Ink

Of Magics and Myths MAG

My littlest sister looked upat me, her blue eyes shining in the candlelight. Her older sister, wiser butstill very young, stared at me with vivid green eyes. They were awaiting myanswer.

How do you answer children when they ask if you believe in magic?Would you say no? I stared back at them, not totally sure of what to say, my mindracing through magics and myths and all sorts of things.

I had told themstories each and every night of the Greek monsters and gods and their manyadventures. I recited stories that I had been told and that I had eagerlydevoured in collections of fairy tales. I made up my own creations, all types offairies and mythical things, and then I watched, the next day, how they prancedaround, pretending to be cavorting with the fairies and riding the unicorns andfighting the Hydra. I saw them peer under rocks looking for elves (or bugs) highand low. My stories thrived on their questions about what fairies really lookedlike, how could they spin moonlight into gowns, how come we never see them...

They still awaited my answer.

I thought of the magic in anotherhuman's touch, the simple love in a family, the way the sun shines through acanopy of leaves. I remembered the way that the sultry reverberation of a guitarblends so smoothly with the tribal beat of the drums, the way the human voice canproduce everything from an operatic wail to a guttural chant. I thought of theway the world seems so different, so strange and beautiful, how the foggy fieldsof Ireland compare with the crystalline beaches of Hawaii and yet they are bothvisions of beauty.

I thought of the violence we humans inflict on oneanother, how pollution seems to follow in our wake, how sadness and violence caneat at our minds. Where is magic in a world like that, where children aretortured by their parents and people can be hired to kill? How can people createmasterpieces of art and literature and yet be able to die and get sick and hate?How can paintings of the slums of New York City hang next to a picture of a foggyday in the mountains?

Then I realized where the magicis.

The magic is in the ability to get past all that, to be able tolive through the pain. The magic is to be able to see magic everywhere, not justin the beautiful. To be able to see it and paint the pain, maybe to rid yourselfof it, maybe to show others it, to capture it on paper - that's the magic. Mysisters were getting impatient. I smiled at them and said, "Of course Ido." The older one looked at me with an irritated frown. "Why don't Iever get to see an elf, then?" she complained.

I smiled, relieved,and said, "You will if you believe." 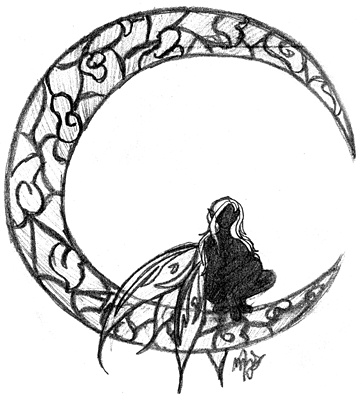