My World as a Firefighter | Teen Ink

My World as a Firefighter MAG

My world is controlled by the sounds of four sets of tones. When one of them sounds, I'm either out of bed, out the door, or both. The newest set of tones is also my favorite - the sound of my fire pager.

I'm a probationary fire fighter with the local fire department, so the beeping of my pager sends a rush of adrenaline through my veins. As a probationary member, there are certain things I'm not allowed to do yet.

My first structure fire was also the first time I rode an engine and didn't just sit at the fire house waiting to hear how great it was. It was a rainy night and I was making dinner while talking with my dad. I had just gotten home and was tired, so when the pager sounded, I listened first: Dispatch to all North Thompsonville monitors. Signal 50 at Washington Heights Apartment, Washington Road; time out 20:49. My brain clicked into gear, one part thinking This is the big one; let's go, the other thinking Argh, not the burnt-food-on-the-stove routine again. I had heard stories about this apartment building, and was skeptical.

My mind was made up 30 seconds later when the second page went out: Repeating for all North Thompsonville monitors, 911 call for thick black smoke filling the hallway at Washington Heights apartment complex; time out 20:50. This was indeed "the big one." My dad turned off our stove and we were out the door, with my dad driving. The mile and a half to the firehouse seemed extremely long with adrenaline coursing through my body. I was shaking so much that I could barely loosen the laces of my boots as the pager announced a report of people possibly trapped.

Engine 42, our first due out piece, was pulling out as we arrived and I ran to my gear locker. My boots, jacket and other things came off as I shoved my feet into the rubber boots attached to my bunker pants. I grabbed hold of the wide, red suspenders and pulled them over my shoulders, adjusting my glove and resusci-mask pouches. I quickly flipped down the flaps on my helmet, slamming it onto my head as I ran for a seat on Engine 43, our second due out piece.

I found myself squished between TJ and Shawn, who is also a probie. Shawn and I grinned at each other as we find our seatbelts in the chaos. We had joined the same night and were each other's support during training. He knew this was my first time riding to a call and we were both excited. The other firefighters put on air-packs and adjusted their breathing masks. I grabbed a flashlight from the holster and handed it down to the other end.

We pulled out of the apparatus bay and the officer in front hit the lights and sirens. It was raining, and the sirens cried their blood-chilling wail. We raced down the street past cars that had pulled off to the side, past the park and baseball diamond, the engineer going as fast as the weather and traffic permitted.

Even with the windows closed, we could smell the smoke. We were given the order to set up lighting, so we pulled up past the driveway of the apartment. Shawn and I jumped out and started lending a hand. We took out hose lines from E-42 and I climbed up on E-43 to get the aerial lights set up and pointed toward the building. We ran crowd control and kept people out of the way as we pulled the ladder truck into the driveway. There were a few little kids mesmerized by the controlled chaos and the fire trucks and we had to pluck them off the bumpers and hand them back to their parents, who were watching the windows of their neighbor's apartment get smashed out.

The first attack team finished knocking down the fire in a matter of minutes, but there was still work to do. It was a fatal fire, so we had to set up an incident command post and call in the fire investigator, police investigators and medical examiner. By this time, personnel and apparatus from every fire district in town has arrived, as well as police. I was assigned to roll hose, so we unfurled the one and three-quarter lines from the bushes and trees they were tangled around. Wet hose is heavy, and pretty soon I tired from the trips to and from the truck. By the time we were done repacking the large diameter hose onto E-42, I could barely lift my arms to put the connectors back into their compartments. We waited a while longer, drinking water, running errands and keeping people away from the command post.

Someone finally realized that we ought to relieve the firefighters from District One who were watching our station until we got back. I climbed into my seat as best as I could with gear on top of me and hose under me. I could barely move, much less breathe.

It was nearly one in the morning and I wouldn't be home from the station for another two hours. It had stopped raining and the cool air rushing in the window felt good against my sweat-soaked face. I turned to face the window and dozed off as the sound of the engine and the wind rushing past my face lulled me to sleep. 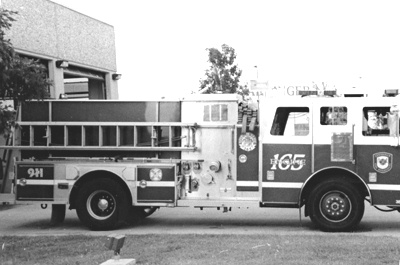