On March 6, 1921, people flocked to the theaters to see Hollywood’s new star in Metro Pictures’ silent film The Four Horsemen of the Apocalypse. Women of all ages were captivated by the man on the screen, a darker, exotic man who was far different than any other silent film stars. Rudolph Valentino soared to celebrity status overnight with unbelievable commercial success. As he expanded his cinema career as “The Latin Lover,” he captured the hearts of America and became an icon in movie history, a man whose romantic appeal crystallized his fame as the first movie star idol.

Rodolfo Alfonso Raffaello Pierre Filibert Guglielmi di Valentina d’Antonguolla was born in Castellaneta, Italy in 1895. As a young child, he was reportedly obstreperous and coddled by his mother, who pampered him through adolescence. After traveling around and trying to find employment, he deported for America, one of the many millions who were processed at Ellis Island. Not long after his arrival in New York City, Valentino found himself penniless and scrambling around getting odd jobs whenever he could. Ultimately, he found an engagement as a local taxi dancer at Maxim’s where he became popular for doing the tango.

During his position at Maxim’s, he came to know a beautiful young heiress named Blanca de Saulles who was unhappily married. Their friendship has been the subject of much speculation, for whether or not de Saulles and Valentino were romantically involved was never known. Regardless, they became inseparable friends and Valentino even stood to support her claims of infidelity against her husband when she filed for divorce. In December of 1916, de Saulles’ husband manipulated his political connections to have Valentino arrested as a result for his interference in the divorce. However, due to lack of sufficient evidence, Valentino was eventually released, though he was unable to find employment because of the publicized scandal.

Shortly after the divorce was finalized, Blanca de Saulles arrived at her husband’s home where he kept hold of their child, despite the court’s ruling of shared custody. Driven nearly mad by confusion and bitterness, she murdered her husband.

Fearful of being connected to the trial, Valentino left New York and headed west. In 1917, he joined an operetta company that was touring the country and participated in their theatrical productions. But a small desire was kindled inside of him when he met a man named Norman Kerry, who aspired to be a silent film actor in Hollywood. Suddenly, Valentino knew that he, too, wanted to make his name with a career in cinema.

After moving to Los Angeles with his new roommate, Kerry, he began to eagerly search for any part he could get in a film. Though he started out as an extra, he moved on to small parts and began to be typecast as the quintessential antagonist because of his Italian features. Before long, he had built up a small following, mostly composed of women who adored his dark visage.

But it wasn’t until 1919 that Valentino finally had his big break. He was discovered by a casting agent named June Mathis who was determined that Valentino was perfect for Metro Pictures’ new film The Four Horsemen of the Apocalypse. He differed in appearance from all past film stars, who were traditionally of fair complexion. Instead, he had a different aura, one that was brimming with a lasting sex appeal. Mathis instantly knew that a star had been discovered.

In 1921, the movie was released and met with astonishing commercial success, ranking as the sixth highest grossing silent film of the era. Valentino was thrust into the spotlight and met with adoring female fans who were captivated by his every action. He moved on to star in the Famous Players-Lasky Studio picture called The Sheik, which would guarantee his stature and reputation as “The Latin Lover.” It was this film that would ultimately stipulate his career and pave the way for his unending legacy.

Valentino was placed on a pedestal of popularity where he was perceived as the epitome of passion and romance. In an interview, one woman remarked that he was “triumphantly seductive.” He was a symbol of masculinity silhouetted on the silver screen. And women adored him, perceiving Valentino to be the essence of manliness.

However, many men in America came to question not only Valentino’s virility but also his heterosexuality. While the women saw him as strong and manly, the men considered Valentino to be a threat to the all American man and to be rather effeminate. During his lifetime, there were many allegations that he was homosexual and responsible for the feminization of men in America. One such article was published in the Chicago Tribune, a report that tried to hollow out the fame and accomplishments of such a talented performer. Outraged by these slanderous accusations, Valentino challenged the author to a public duel in New York. After beating his opponent, his boxing trainer stated, “He was the most virile and masculine of men. The women were like flies to a honeypot. He could never shake them off anywhere he went. What a lovely, lucky guy.”

But this life full of riches and fame was not destined to last long. Rudolph Valentino died suddenly in 1926 at the mere age of thirty-one. Over one hundred thousand people lined the streets to see his body, to even get a glimpse of the famous star. Women fainted at the sight of him and riots broke out as everyone was hysterical out of shock and immense sadness.

But one woman in particular paid her respects in a memorable way. She arrived at his grave dressed in black and carrying a single red rose, which she laid gently on his tomb. This same woman appeared annually on the anniversary of his death until she, too, passed away. Many believe that this secret mourner was, in fact, Blanca de Saulles, the woman Valentino may have loved.

Though Rudolph Valentino may not have been blessed with a lengthy career, he is undoubtedly one of the most significant male actors of all time. His presence was undeniable and his impact was extraordinary. Though his movies may not be as popular today, his name and influence have endured and stood the tests of time. Valentino’s mesmerizing acting and smoldering expressions were burned into the memory of his fans forever. 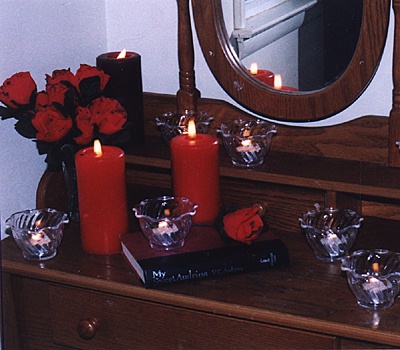 The author's comments:
This is my way of sharing about the amazing talents of Rudolph Valentino...an actor who literally changed Hollywood.
Post a comment
Submit your own