Favorite Quote:
"You will never find the time for things. If you want time, you must make it." Charles Buxton, English writer

Ansel Adams, born February 20, 1902, was an only child to Charles Hitchcock Adams and Olive Bray Adams. From the beginning, he enjoyed nature, and spent much time exploring and collecting insects.

Adams was homeschooled for two years by private tutors, his father, and his Aunt Mary. The former taught him the ideas of Robert G. Ingersoll, an abolitionist and agnostic. Growing up, he was also influenced by the ideas of Ralph Waldo Emerson—to live modestly and morally, with an obligation to care for others and for nature. Later, the philosophy of Edward Carpenter’s Towards Democracy would inspire Adams to pursue beauty and display it to the world.

When he was twelve he taught himself to play the piano, endowing his life with discipline and structure. Music was, at first, his profession of choice; however, photography eventually swept him away.

His first visit to Yosemite National Park in 1916 was accompanied with his first camera, a Kodak Brownie box. This visit spurred an avid interest in photography, and Adams spent part of every year for the rest of his life in the park. As a 17-year-old, he joined the Sierra Club, an organization dedicated to preserving Earth’s wonders and resources. Adams met his wife in Yosemite Valley: Virginia Rose Best, whose family owned Best's Studio.

Throughout Adams’ 60-year career, he continually expanded his range of work. He founded a magazine, worked for the military during World War II, taught thousands of students, formed the first fine art photography department in the U.S., and helped convince Congress to allocate Sequoia and Kings Canyon as national parkland. To supplement his income, he worked on commercial projects for companies such as Kodak, AT&amp;T, and Fortune magazine.

Adams preferred the high resolution of large-format cameras, despite their bulkiness and cost of film, and his black-and-white photographs of nature are his trademark. Some of Adams’ most popular works are Monolith, The Face of Half Dome (Yosemite National Park, 1927); Clearing Winter Storm (Yosemite National Park, 1940); Moonrise (New Mexico, 1941); and Aspens (New Mexico, 1958). A single print of Moonrise fetched $609,000 at Sotheby’s auction in 2006.

Adams developed the Zone System, a highly technical guide to controlling light and dark values to the photographer’s best advantage. The system, described in his book, The Negative, divides the range between the darkest black and the purest white into 10 sections. Including nine other technical guides, Adams’ work proves that photography is an art and a science.

In the early years of his career, color processing and printing had many shortcomings, and he was concerned that color limited his artistic vision. However, as technology improved near the end of his career, Adams made over 3500 color photographs.
In the mid-1920s Adams had used techniques of those artists who mimicked paintings with their photographs, but in 1932 he co-founded Group f/64. This cluster of seven San Francisco photographers flouted the pictorialism movement, and instead embraced straight photography. This style relies on sharp-focused and careful compositions, as well as precise exposure and contrast. (F-stop 64 is the smallest aperture of a large-format camera lens and gives the greatest depth-of-field. In comparison, the human eye ranges from f/8.3 in a very brightly lit place to about f/2.1 in the dark.)

At eighty-two years of age, Ansel Adams died from a heart attack in a hospital in Monterey, California. Nonetheless, his legacy continues to impact all of America. He was a notable environmentalist, working not only for preservation of wilderness through the national park system—Yosemite in particular—but also for the Wilderness Act, wild Alaska, redwood trees, endangered animals, and clean air and water. This passion showed in his grand California and New Mexico scenes. In his lifetime he attended countless meetings and wrote hundreds of letters to newspapers and politicians, but his greatest influence arose from his photographs.

Adams received many honors and awards during his lifetime as well as after death. Significant awards include the Sierra Club John Muir Award (1963), the Conservation Service Award from the Department of Interior (1968), and the Presidential Medal of Freedom, the nation's highest civilian honor (1980). In 1966, he was elected a fellow of the American Academy of Arts and Sciences, and he was inducted into the California Hall of Fame by California Governor Arnold Schwarzenegger in 2007.
The Sierra Club and the Wilderness Society established awards bearing his name. In 1985, the Minarets Wilderness and a mountain (both in the Inyo National Forest) were renamed the Ansel Adams Wilderness and Mount Ansel Adams, respectively. 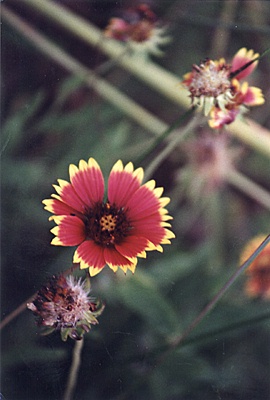 The author's comments:
"Yosemite Valley, to me, is always a sunrise, a glitter of green and golden wonder in a vast edifice of stone and space. I know of no sculpture, painting or music that exceeds the compelling spiritual command of the soaring shape of granite cliff and dome, of patina of light on rock and forest, and of the thunder and whispering of the falling, flowing waters. At first the colossal aspect may dominate; then we perceive and respond to the delicate and persuasive complex of nature."
– Ansel Adams, The Portfolios Of Ansel Adams
Post a comment
Submit your own

Favorite Quote:
If you could be God's worst enemy or nothing, which would you choose?