Triangles seem utterly average: not exactly beautiful, not exactly ugly. Most of the time, they go unseen as we stand admiring the immense complexity of the architectural wonders they support. But regardless of whether we notice them or not, triangles are ubiquitous wherever strength and rigidity is necessary to make resilient structures. Furthermore, if the universe can be reduced to a pure mathematical structure, then to understand it we must understand triangles.

The triangle is one of the simplest polygons. It is seen in many patterns and we find that many geometric structures can be best analysed by breaking them down into triangles. But what's striking about it, is that its three sides are inherently rigid. Because of its unalterable rigidity, the triangle remains unchanged when pressure is applied to it, making it the most stable polygon. This property is what sets the triangle apart from other polygons and makes it an excellent support structure (Fox).

The last remaining wonder of the ancient world: the three Pyramids of Giza with their four triangular faces, have stood witness to the architectural strength and stability of the triangle for over 4,000 years. The iconic geodesic dome at Epcot is formed by a myriad of small interconnected triangles that render it astonishingly strong in relation to its light weight (Fuchs). The brilliantly designed Brooklyn Bridge is supported by right triangles: each diagonal steel cable forms the hypotenuse, with the bridge floor and tower acting as the base and leg (McCullough 65).

All these structures employ the triangle’s properties in different ways but what they all have in common is a truss: a network of triangles that work together as one structural unit. Trusses are so common because they amplify one of the triangle’s greatest architectural characteristics: they're efficient, lightweight, and economical, yet still provide lots of strength (Orlin). This is easily seen in the equilateral triangles used in the Pyramids of Giza, the Epcot’s puzzle of scalene triangles, and the Brooklyn Bridge’s web of right triangles which are all reliant on triangles to hold steady.

However, the triangle’s properties extend beyond the realm of architecture and into a more abstract level of calculation, allowing us to admire the beauty of geometry. The use of these properties to calculate distances instead of measuring them dates to antiquity. Aristarchos of Samos used trigonometry to propose the Heliocentric Theory long before Nicolaus Copernicus (Tegmark 23). The greek philosopher Thales is recorded to have used similar triangles to estimate the height of the pyramids of ancient Egypt (“Triangulation”). In 1668, France was the first country to undertake national triangulation, lead by Abbe Jean Picard. The map created by this effort was more detailed than any previous map, touting almost the same scale as modern-day yellow Michelin tourist maps (Bellos). In addition, surveying, GPS, and almost all sorts of modern-day navigation are based off of triangulation. Without triangles, navigation and accurate mapping of the earth’s surface would be nearly impossible.

But the universalness of triangles goes beyond math and engineering. Triangles are made up of three sides and corners; according to Pythagoras, 3 is a divine number. The number 3 and its projection as a triangle is also linked to the Holy Trinity of Father, Son, and the Holy Ghost, and to other trinities such as mother, father, and child, or past, present, and future. In addition, skill, knowledge, and capital form Honore de Balzac’s social triangle while boiling, roasting, and smoking form the culinary triangle. Moreover, the Eye of the Providence is represented as an all-seeing eye surrounded by rays of light and enclosed in a triangle, as seen on the reverse side of the Great Seal of the United States. The triangle as a symbolic shape is also used by the Freemasons who refer to God as the “Great Architect of The Universe.”

The Universe that stands continually open to our gaze and gazes back at us, like an open book. “The grand book of the universe” that Galileo Galilei discovered, which “cannot be understood unless one first learns to comprehend the language and read the characters in which it is written. It is written in the language of mathematics, and its characters are triangles... (Tegmark 243).”

The triangle is an architectural form of poetry. It stands between form and content, the child of a metaphorical poem and an elegant mathematical proof. A timeless symbol, an essential building tool, and a light with which to wander the dark labyrinth of the universe as we gaze at it and, much like Henry David Thoreau, wonder, “The stars are apexes of what triangles?”

McCullough, David G. The Great Bridge: the Epic Story of the Building of the Brooklyn Bridge.  Simon & Schuster, 2012.

Tegmark, Max. Our Mathematical Universe: My Quest for the Ultimate Nature of Reality. Penguin Books, 2015. 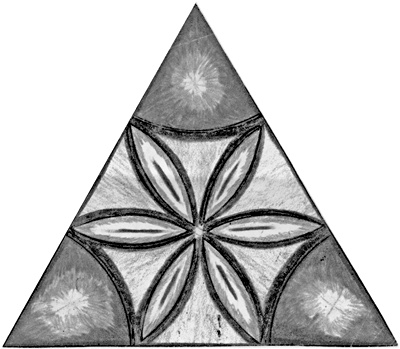