Favorite Quote:
"You are the object of your own action"- thought of this one on my own.
"Just Keep Moving Forward"- Meet the Robbinsons, my all-time favorite movie

This is a quick post- something that I thought about the other day.

Being that I was in the middle of studying and couldn't write a blog post right away, I wrote myself a little side note:

"Never be afraid
Just have confidence
Because when you screw up, nobody will know what you really have
Nobody will care"

If I don't have confidence when singing (or doing anything- apply this to your situation), then my voice will not come off as very strong and the quality of my music won't be all that great. Nobody will ever know what I'm actually capable of. I will never be able to give them my best. My real ability will go to waste because nobody will know about it BECAUSE I was too nervous while singing. And in the end, nobody will care because nobody will KNOW.

I don't want my possible success to be cut short because of fear.

I often think about the quote. "There is nothing to fear but fear itself"- Franklin Roosevelt

It is so true.
Unless of course, one is afraid of jumping off of a building or is afraid of petting a bear- that kind of fear is obviously good. Everything in moderation. I'm referring to the kind of fear that holds us back from achieving our dreams and from taking constructive risks, because in those cases we are missing out and possibly even losing great opportunities.

So I am telling you to ignore your fear that is holding you back from socializing, from joining that club, or from following your dream- because in the end either you go after it or you don't- and the outcome will affect nobody but you. Nobody will ever know.

And one or two or several failures will not stop you from being successful.
There have been so many times that success stories were first failure stories. Starbucks was denied from banks like 200 something times, J.K Rowling was turned down by multiple publishing companies before Harry Potter was even just considered, Usher turned down Justing Bieber's offer to sing for him the first time Justin met Usher, etc.

How to stop being afraid:
Ignore the negative thoughts, Just stop thinking them. This takes time and practice and determination and perseverance and will sometimes drive you crazy but you DONT. GIVE. UP!!!!(Meet the Robinsons reference!!)

So good luck with all of that and don't forget that at the end of the day- either it happens or it doesn't. It's your life- take it into your own hands. 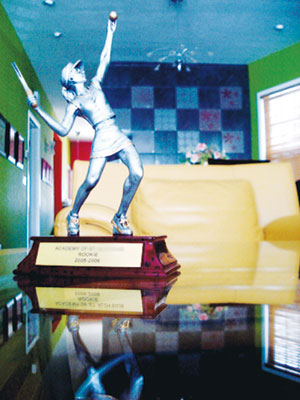 Deb is the founder of BetterMe, a friendly and interactive site for teens who wish to improve themselves in any aspect.