Beauty Without a Number | Teen Ink

Beauty Without a Number

Favorite Quote:
When asked about race...

"Well, when I went to the bathroom I was Russian, and when I came out I was Finnish."

"Irish I could tell you."

So I was walking in the grocery store the other day, and somewhere between the kosher and the baking aisle, I thought to myself: what if I died right now?

Well, no. It should be that way because, technically, standing on the scale is just a way of figuring out how much you weigh. But scales don’t just measure pounds or kilograms anymore: they measure beauty. Everyday, thousands of women (and men) stand on the scale like the old queen stared at her mirror in the tale of Snow White. “Mirror mirror on the wall, who is the fairest one of all” has suddenly become “scale scale on the floor, tell me if I weigh more”. Aside from the fact that “scale scale on the floor” doesn’t sound as catchy as “mirror mirror on the wall”, it’s a ridiculous motto.

As far as we know, the universe is relative. A goat standing on a mountain might look tiny to someone standing far away, but look larger to someone standing next to it. Someone running fast might appear lightning quick to someone slower, but look like a snail next to a race car. And so on. So why isn’t beauty the same way? Why is it so obscene to weigh more because you’re taller? Why does everyone have to starve themselves to fit into this “Cinderella slipper” frame of beautiful or handsome? And who mandated that we should all deprive ourselves of food, despite the fact in many Western countries we have an abundance of it?

Not only does it seem silly and self-centered to refuse to eat compared to countries whose malnourished people fight for food, it’s also blind and toxic. Everyone is beautiful, but there’s a machine out there which seems to be chomping them up and grinding them into dust---literally. How many models have died like falling pigeons just to fit into small jeans? How many people have hurt themselves because they don’t fit into the beautiful picture? I could start listing off statistics, but they’re too high and it would just be useless. The real question is: how long will it take us before we realize that a tawdry size zero skirt isn’t worth it? How long will it take us to realize that dazed, made up girl or guy in the poster is just a picture?

Losing weight is not wrong, but we should not define ourselves by that number on the scale. That number barely represents anything about you. Digits cannot express your favorite candy, the goofy way you laugh, or the crazy way you dance when your favorite song is on and no one is around to see you. Digits cannot capture your smile or the way your eyes light up in an argument. Digits cannot describe how much fun you have by jumping into the roaring ocean waves or running through a flower field. Digits are not worth me or you hating ourselves just because it’s over 110.

So do what I do. Stop caring. Eat what’s reasonable and healthy for you. Do exercise that you enjoy. Don’t be afraid to have that extra ice cream when you’re out with your friends. Stop giving a hoot about supermodels: they’re only there to sell clothes. Do yoga because you want to, not because it’s fashionable. Read an extra article on Teen Ink. Learn to live. It’s what I’ve decided to do, maybe because I see the danger and stupidity of starving myself. Maybe it’s because I want to do other things than obsessively follow diets. Maybe it’s because I know my life is worth more than a number. Or, if not any of those, I’ve decided that I don’t want to be the girl that starves to death in a grocery store. 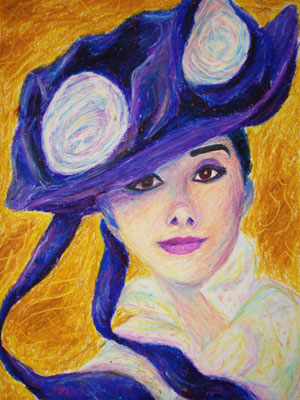 View profile
Exactly! You have the right to live your life and enjoy it! Great article.
S_Oehvren_ said...
on Jul. 27 2010 at 2:04 pm
S_Oehvren_, San Clemente, California
0 articles 0 photos 22 comments
View profile
God meant for you to enjoy life, and indeed, the Declaration of Independence spells out as self-evident your inalienable right to life, liberty and the pursuit of happiness.  Learn it, love it, live it.