On a blissful spring daywhile sitting in typical Phoenix traffic, something is out of the ordinary. Thenearby red car is free of all noise but for its radio. One might think that thecar's engine has stalled, but the driver isn't frantically fidgeting with thekeys in an attempt to restart before the light turns green. What's this, agovernment plate? Is it some sort of weird experiment? The light turns green, andthe car emits an almost inaudible click, then a high-pitched whine. The car iselectric, and on the road, thanks to my high school's Electric Vehicle Team whosemain objective is putting emissions-free vehicles on the streets ofPhoenix.

Starting out as a racing team funded by our local power company,Electric Colt has been a very successful, long-term program. Similar programsonce existed in high schools across Arizona, but due to funding cuts, many havedisbanded.

Our vehicles have earned us many first-place victories,including the first Arizona Electric 500 competition. We have a stack of trophiesto show for the team's efforts. Electric Colt has converted five cars, and asixth is soon to be initiated.

Recently, the funds for our project wereshifted from race cars to street-legal cars. We are in the process of finishingour first one, an '85 Pontiac Fiero, as part of the Enviro Tech program. Exceptfor needing paint, a new interior, a few more wires, and some nuts and bolts, thecar is basically drivable. It will be available to the school's faculty forerrands. With a range of 30 miles, it will even be able to accomplish the journeyto the district office.

To a certain degree, it can be argued that anelectric car just moves the tail pipe emissions to the power plant. But ourelectric car is five times more efficient than a gas car, eliminates the coldstarts on a car when emissions aren't regulated, and we get some nuclear andsolar electricity. We are hoping that our efforts will be the foundation for manymore vehicles.

Our next project on the line is a somewhat newer Mitsubishithat was converted and donated to us. We took out all the parts we didn't needbecause we are improving many of the car's systems. When we finish the Fiero, wehope to make relatively quick work of the Mitsubishi and have a fleet of twofully operational and well-maintained electric, street-legal cars.

Thiswhole program wouldn't be possible without the dedicated efforts of the teacherwho sponsors the club - the school's auto shop, metal shop and technologyteacher, Mr. Amborse. Almost daily, he stays after school to oversee our work.Thanks to him, I have actually started converting my own car to electric. I hopeto have my car completed (or at least partially operational) by summer's end so Ican drive it to school next year.

If you live in Arizona, or if you evervisit and happen to notice a quiet red Fiero sitting at a stoplight, justremember what it is. As you drive by, give the driver a thumbs-up in approval ofwhat we are doing. You'll be able to breathe easier because of it. 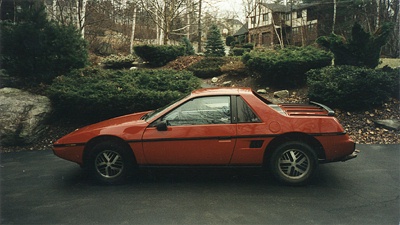 Favorite Quote:
"I write for the same reason I breathe - because if I didn't, I would die. " -Isaac Asimov