Vertical farming is essentially growing crops indoor in vertical stacks. Growing crops indoors obviously means that all the natural elements are controlled (lighting, climate, irrigation and fertigation), providing arguably safer farming given significantly lower risk of water contamination and reducing need for harmful pesticides. In addition, the water usage for vertical farming is estimated to be 95% less due to the water being recycled. Vertical farming is fast growing and has said to be the solution to the increasingly fast-growing population which is said to grow by about 2 billion in next thirty years, with a forecast world population of almost 10 billion by 2050.

Vertical farming takes up a significantly lower amount of space than conventional farming which means minimal disruption to the surrounding environment. The cost currently is high for the scale at which vertical farming takes place. The electrical costs to run the facility in which ventilation and lighting needs to be manipulated struggle to operate profitably, combined with the specialised workers that are needed and the prices of crops relative to the price of traditional produce. However, the indoor aspect and manipulation of all the naturally occurring elements mean these crops aren’t subject to pests that could spread disease through the crops or simply eat them and bad weather conditions are unable to destroy them. Vertical farms and indoor farming in general means crops can be grown locally. This means that costs of transportation are cut and so are carbon emissions from the extensive journey across the country. Products are also fresher too because of the reduction in time between harvest and being brought to your door! I recognise that the economic model for vertical farming is potentially not yet able to produce crops at the same price as traditional farming. However, if you anticipate that with further technological development, there will be improvements to the efficiency which will drive this pricing to be more comparable over time.

Vertical farming is more sustainable than conventional farming as it removes all the damaging farming techniques that farmers often struggle with. There is no need for techniques such as weeding, sowing or fertilising which all damage the environment. As said earlier, the disturbance to habitats is eradicated with vertical farming which means biodiversity is left alone to flourish.

Vertical farming is dependent on technology which can be risky considering technology can fail and added with the financial risk of operating a vertical farm, it is a difficult undertaking.
But, as we are aware, technology is rapidly advancing. So much so, that AppHarvest, an AgTech Company, and a leading one in creating new, sustainable and technologically advanced farming, has recently started using a Root AI to assist in maintaining their indoor farms. It’s particularly exciting and astounding how technology is becoming intertwined with agriculture and architecture to create a new age of sustainability.

There is about a third of the Earth that is land, and of that third, 71% of the land is habitable. Around half of the Earth’s land is being used for agriculture right now. If our population increases as it is expected to, there will simply not be enough land to provide the global the population with food. Current farming methods and human calorie requirements are not sustainable. Vertical farms may very well be the future because we simply cannot go on with carving out large pieces of land for farming. The United Nations estimate that 10 million hectares of forest were cut down annually over the last decade, primarily to allow for increasing agricultural needs.

Vertical farms, in my opinion, provide a way forward in terms of sustainable agriculture. Particularly with the COVID-19 pandemic proving that we have the technology for a large amount of the population to work at home, there may be many office buildings left empty in cities as a result. These vacancies would be perfect to hold vertical farms and would also provide, again, easy and local access to crops in cities. Vertical farming could be a very valuable economic sector in the future. Ten years ago, electric vehicles were seen as a niche experiment being promoted by a small car company called Tesla, today Tesla is the most valuable car company in the world. I wonder who will be the “Tesla of vertical faming” ten years from now. 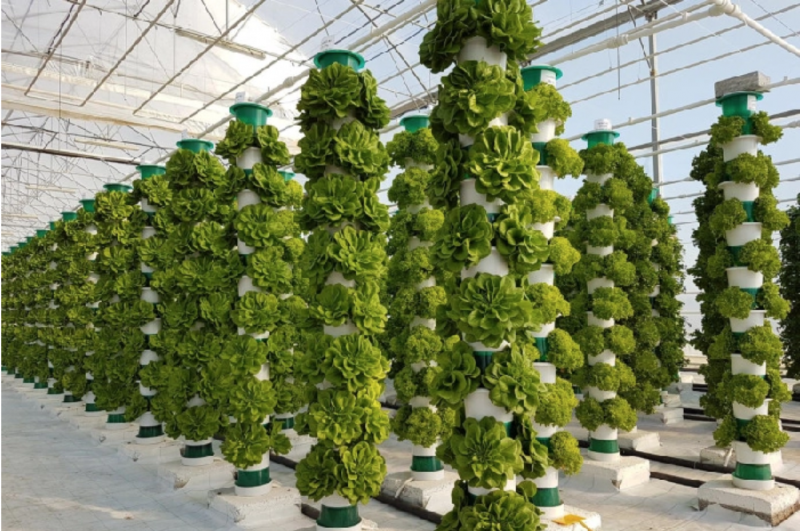 © Danielle B., Woking, Other

photo credit: Adam Gasson (for photo to accompany my article)