The Truth Behind The Gates | Teen Ink

The Truth Behind The Gates

Behind those bright displays and extravagant shows lies a world of darkness and misery. Hundreds of innocent creatures’ lives all taken, due to the horrendous care at this popular family attraction. The annual visitor rate at SeaWorld theme parks attendance nears 4.64 million guests, yet all of them are oblivious to what goes on at the heart of it all.

Shamu was one of the first killer whales, or scientific name Orcinus Orca to ever make an appearance at SeaWorld. She was the fourth orca ever captured purely for entertainment, and the second female. After being dragged to SeaWorld San Diego, she was starved of food in order for her to learn tricks for the audience. Reportedly, Shamu was showing signs of erratic behavior such as aggressively biting trainers, possibly being linked to an underlying disease. Shamu later passed away in 1971 but passed on her name to the many orcas who followed, in shows and events that have become a controversial topic. Throughout her career, Shamu only survived 6 short years in captivity.

Starting in 1971, an innocent orca whale’s life has been lost every year. They are among the smartest, most emotionally advanced animals on this earth. In the wild, killer whales live in large, complex societies, and can swim 140 miles in a day. (Orlando Sentinel). In the wild, orcas have a lengthy lifespan of up to 50-80 years. A 2015 study finds that in captivity, this number is harshly reduced down to a mere 12. At least 166 orcas have died in captivity, not including 30 calves. 49 of them are from SeaWorld’s horrendous treatment (Whale and Dolphin Conservation USA).

In the wild, Orcas are social creatures that live in pods. After 17 months of pregnancy, mothers give birth to their babies every 4-10 years. They give birth to only one baby orca at a time(National Geographic). Life in captivity has stripped away that maternal bond between babies, and studies show that baby orcas born in captivity have much less chance of survival. In 2017, the last captive-born baby orca at SeaWorld San Antonio died at the young age of 3 months due to suspected pneumonia, the same disease killing most of SeaWorld’s killer whales. Sea World reports that they will cease to continue their orca breeding program.
Up until today, there has been no fatal death caused from orcas harming humans in the wild. Researchers say that orcas in captivity have come to show detrimental effects on their health, being the reason why so many of SeaWorld’s orca whales have passed away. Scientists have shown that pneumonia and septicemia are the two most common causes of death in captive orcas. It has become proven that many of these deaths were caused by prolonged exposure to intense stress, some whales going as far as to self harm. They would grind their teeth, and even chew concrete from boredom.

The controversial film Blackfish released in 2013 has changed many views on SeaWorld, and accounted for over a $1.7 billion decrease in SeaWorld’s income. Starring in Blackfish is another infamous “Shamu” named Tilikum. In 1983, he was caught at Hafnarfjörður. At a young age, he was stripped from the only home he’d known like all other wild-caught orcas at SeaWorld. Over his 34 year long period of captivity, constant stress and captivation led him to deteriorate mentally and physically (PETA). Tilikum was responsible for the deaths of 3 people. The victims were an anonymous 1991 trainer, a trespasser in 1999, and former SeaWorld trainer Dawn Brancheau. 75% of the total number of fatal orca interactions were caused by Tilikum, all within a few years. After his violent years at SeaWorld, he passed away in 2017 from a bacterial infection.

It’s clear to see that the happy shows and eye-catching events at SeaWorld are not what they seem. From when they opened in 1964 until modern times, nothing has changed about the way they mistreat their tortured animals. These are real creatures, living animals with minds, that are forced to do tricks against their will. Nearly 40 years of life had been stripped away from every orca at SeaWorld, leading to a life of depression and illness. The longer we wait, the darker these animals’ lives get. 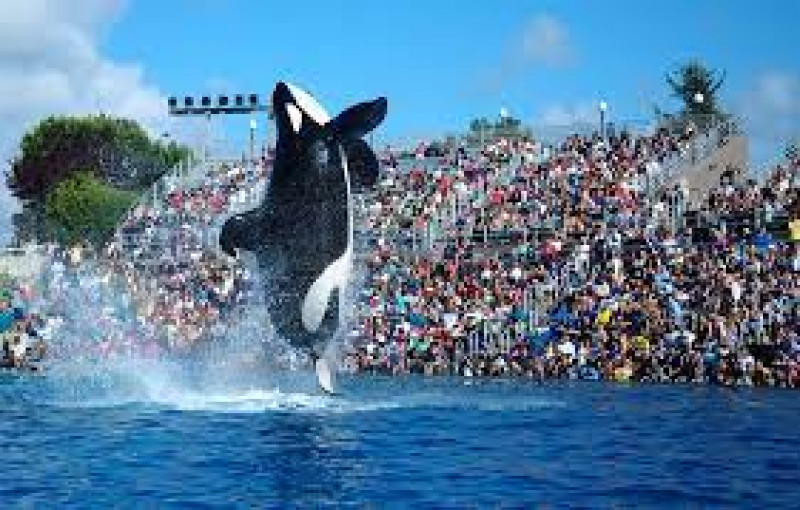 This piece highlights the truth behind what goes on at SeaWorld, and shows how animals are receiving horrible treatment. It shows how we must change this and save the lives of innocent animals dying in the hands of this company.