Maslow’s hierarchy of needs is a theory of human developmental psychology written by Abraham Maslow in 1943. The theories are categorized into a pyramid. At the pyramid’s tip is Self-Actualization. Maslow describes this as the desire to be everything one has the full potential to be. A bully is someone who purposefully hurts someone else’s potential. Bullying may never end because it’s been ongoing for forever. What can change is the effect bullying has on its victims.

The earliest experience of bullying I had is second grade. Just like Maslow explained, I wanted to reach my full potential and find my place in the world. This dream fell into the Esteem category in the middle of the pyramid.

I found some girls who I thought were awesome. Naturally, I followed them around thinking they were so cool. Second grade is not old, and I definitely had no clue what the definition of friend was. Is a friend someone who bosses you around? No! I wanted to be friends with these girls so bad I didn’t realize what was going on.

Fixation with making myself something that I wasn’t took over in order to fit in. “We only talk to tomboys, and you’re not a tomboy.”
Yes, that was entirely true. I was and always will be a girly girl, playing with princess Barbies and owning a closet bought at Justice, Just for Girls. To escape the constant teasing and jokes made at my expense, I changed. I took to wearing boy clothes and put songs I didn’t like onto my Ipod. Every day after school I cried during the car ride home, and then cried myself to sleep at night. After a year, it became clear these girls were not my friends. So I tried to make new ones. Still, these girls haunted me around non-stop. I remember purposefully trying to avoid them at recess, and it was them who came up to me. At first it would be all sweet and nice.
“Hey, how is it going? What are you doing? Want to go play tag?”
Of course, I would have to be ‘it’, and chase them around. One would come up from behind and trip me and they circled around to laugh. Eventually we all went our separate ways, but I still had scars. Insecurities about my image haunted me all through middle school. Until finally I came to terms with whom I was as a person and learned to let go.

Today I see those same faces on Facebook and Tumblr. I don’t care about where they are or what they are doing. Barbies revolutionized to an obsession with fashion, and Justice turned into Top Shop. I love myself, and every day embrace what I am and will amount to be. In some ways I am grateful for the bullying I experienced. It taught me many things, including how to be the best Me, I can be. 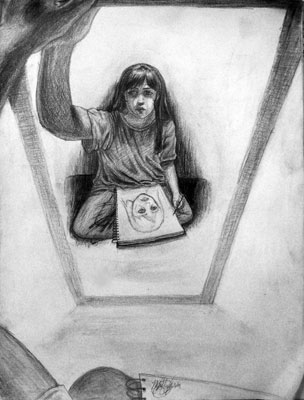 Favorite Quote:
Realism is an excuse for mediocrity.

Favorite Quote:
what you see in the mirror is not you but one of two paths you can take. -Shayla Crumley 2010

Favorite Quote:
The higher up you go, the more mistakes you are allowed.
Right at the top, if you make enough of them, it's considered to be your style.