I love you | Teen Ink

She searched through the forest frantically. Every step she took was amplified by the crunching leaves beneath her feet. The sun was going down and every tree was fading into the darkness of the night. She was certain that she knew the way ,but then as she passed each tree they all began to blur. The branches started to reach out and attack her. She kept on running with tears streaming down her face. She wanted more time. But the clock was ticking and she had no more energy left within her. She stopped and fell to the ground with exhaustion. Her legs were numb and she could barely catch her breath. Her heart was pounding inside and her ears were ringing.
She closed her eyes and desperately tried to remember. The path was clearly etched in her mind. Everything seemed so distinctive ,but then she opened her eyes. She couldn't understand where she took a wrong turn and her frustration grew by the second. If she had only ventured into the forest earlier then maybe this would be easier. She leaned back against a tree and closed her eyes again.
Her thoughts then wandered off to him, his warm smile, and his chocolate brown hair. He had always been there for her. She felt angered that she couldn't do anything to change what happened. But she had to go back to the exact spot where she was certain it had happened. It was the only way she could confirm her suspicion. If all she had was suspicion to go off of then so be it. She was determined now more than ever to find that location.
The forest was filled with the rustle of animals and eyes glimmered from tree hollows. Just then a gust of wind swept through her long blonde hair and sent a chill down her spine.She opened her eyes abruptly, and a huge pit in her stomach formed. This was the spot.
Right besides her hands she noticed the odd feel of the tree. That portion of the tree was smoother than the rough outer layer that covered the rest of the tree. She brought her face closer to the bark at an  attempt to see in the darkness ,but as she outlined the carving in the tree she knew. It was their initials that he had carved on their first anniversary. The J plus R were in the middle of a heart. A tear escaped her eye and ran softly down her cheek.
This is the spot where he had taken her for their special date. He had planned the perfect picnic setting. Candles were lit everywhere and they glowed like a melody in synch with the lighting bugs. Of all food to pack he had decided on putting a pizza in the basket.
"Pizza, oh how romantic" she said giggling, but it was his smile that tied this picturesque moment together.He handed her a slice, " well it is your favorite." The night under the stars couldn't be more perfect.
Then in the middle of the date he reached inside his pockets and took out  a small box that was covered in blue wrapping paper. As she untangled the ribbon and glanced inside a silver heart shaped locket caught her eye. Then just as he handed her the gift his body collapsed. All the air in his body had escaped and she frantically called 911. The signal was horrible and as soon as she got the operator on the phone the connection was lost. She redialed multiple times until she gave enough information for the paramedics to find them.
They took him away to the hospital in an ambulance. Shortly after he was officially declared dead at the scene. He had suffered what appeared to be a heart attack. No one understood how an eighteen year old suffered from a heart attack. The police had opened up an investigation and searched the area as well. Eventually it was closed and concluded alongside the doctors that it was a health issue that had caused his death. She remembered the day of his funeral and how it was cloudy. It seemed unreal to be watching her boyfriend be lowered into a hole in the ground. It took her four months to finally have the courage to return to the forest.
In the panic of the moment everything was forgotten. Their perfect date turned into a catastrophe. Now all she wants is to find that last happy memory of him, that heart shaped locket. However her eyes fought to stay open and she slowly drifted into sleep.
When she awoke the earthy smell of mildew was all around her and her hair was covered in leaves. The light temporarily blinded her as she rose up. She couldn't recall where she was first ,but then she remembered. She took this opportunity to search for the necklace. She knew it was within her grasp because this was the spot. She frantically searched every inch of ground surrounding her ,but she couldn't find it. Her stomach began to tremble from hunger and her energy was dwindling. Coming to the realization that she would never recover the necklace she decided to slowly head home. Out of the corner of her eye she saw a shimmer as the metal caught the sun. She quickly scurried to that area and grabbed the necklace.
"I found it!" she exclaimed with relief. Her voice echoed off of the trees in the forest. She was overjoyed that at last she had found the locket. She opened it gently and engraved inside were the words, I love you.
She whispered, "I love you too." And then her body became paralyzed. A pain rushed to her side and she looked down to see a dart had punctured her.
Out of the woods an angry deep voice replied, "I love you more." 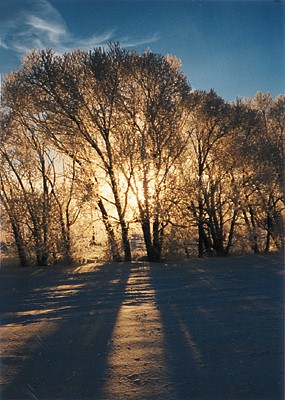 I wrote this for my creative composition class.