Because running from fate never got anyone anywhere.

"You're a fool, Mina," the old man's words echoed in my head, "if you think you can defeat them at such a young age. People that have years more of experience still haven't done it. What makes you think that you will?"

In anger, I slammed my fist into the wall. I wasn't angry at the fact that I had tried to defeat them. Regretting something like that would just have proven the old man's point.

No, I was furious that I'd let HIM tag along.

I glanced across the totally white room at him. His slightly long, dark hair fell in front of his eyes, and he was still in that stupid upright position in unconsciousness. Again, I punched the wall. I could have killed him right then and there. I KNEW he'd be the death of me!

Pain finally shot up my arm, and I glanced at my knuckles. Red, of course. I glared at him across the room. He was lucky the wall dealt with my frustration instead of him.

A low groan escaped his lips, and slowly, his navy-blue eyes opened. "What... where am-" He cut himself off when he saw me. "Mina! Are you okay?! What happened?!" He looked around the room frantically, trying to find an escape from a blank area. "Are we dead?" he whispered.

I ran over, grabbed him by the shirt, and slapped him across the face. "No, but you're going to be!" I shouted in his face. "Do you realize what you've done by sneaking along?! I had them right in my hands, and you made me let them slip right through my fingers! You're human, Daniel, stop acting like you're anything more! Stop acting like you can help me!"

His hand drifted toward his now-pink cheek, then he glanced back at me, heaving like I'd just knocked the wind out of him. With my strength, I might have. For a moment, though, he actually seemed... angry.

"But I can," he whispered. "I can help. You don't understand, Mina. I'm stronger than you think." He tried to push my hands off his shirt, and I punched him and then released him. He fell to the ground and, slowly, stood back up. Gasping for air, it took him a while to regain himself. Then he glared at me, his dark eyes more like daggers than they'd ever been. "So what if I am human? So what if I don't have any supernatural powers or strengths? So what if I'm not a freaking werewolf like you? Just because I'm human doesn't mean that I can't do anything! Look at the people around you, Mina! We've come a long way; WITHOUT you or your stupid werewolves! We don't need supernatural! If anything, YOU need US to keep things in order!"

I growled in furiosity, then leapt at him and punched him square in the jaw. "How dare you talk to me like that! Do you know you're place in this world?! Do you know that you've let the biggest villains of our time escape?! Knock it off, Daniel! Stop trying to be something you're not!" I turned and walked away, the anger growing inside me. He was a moron, a fool, an idiot if he thought he or any human was strong enough. I glanced at my claws, wondering if I should kill him right there.

"I'm not trying to be anything but me," he muttered. "You keep underestimating me. If you were human, you'd be just as strong as me. Having 'superpowers' or whatever doesn't mean anything. Do you know who won in the battle Batman vs.-"

"That's a stupid COMIC BOOK, Daniel!" I shrieked. That was it; he'd pushed me over the edge. I darted toward him and punched him, kicked him, clawed at him, praying that he would, die, die, DIE!

But no matter how hard I kicked, no matter how deep a wound I made, he still stood there, unmoving, not giving up. I grabbed him by the shoulders and thrust him against the wall. "If you're not going to die, then fight, you coward!" I punched him again, watching the blood fall from his mouth. "Stupid human!"

He grabbed my fist, and, in shock, I attempted to get away. He wouldn't let me go. How could he do this?! How was he living?! How was he so strong?!

That made me freeze. No one had every said anything like that, and it was such a hard blow, it was almost like he'd punched me back. He grasped my shoulders, and if I wasn't still frozen, I would have run. Now that I could hear my own breath, I realized I was heaving just as much as he was. I gazed into his eyes, wondering what he was doing. His expression shifted from angry to understanding in seconds.

I let go of him and backed up, my eyes hardening. "You really are stupid. Love? Me? A werewolf? Come on, Daniel! Werewolves don't love! If you're going to love anyone, then make it a your own species, you idiot! I could never love you! All you do is-"

"All you've called me the past few months is 'fool,' 'idiot,' 'stupid human,'" he interrupted. "And maybe I am. But in case you didn't know, humans don't choose who they fall in love with." He glanced back at me, then buried his face in his hands. "I can't help it, Mina!"

I shook my head. This had to stop. He had to stop this foolishness right now. "I'm sorry, Daniel," I stated coldly, "but it's not going to happen. I just can't. Once we get out of here, you're going back home and you're going to forget all about me."

He didn't say a word. He just stood there, breathing hard, as if trying to find a response. He never did.

The guards burst into the room, the humans with guns, the others without. Gradually, I realized they were all staring at me. The chief came int the room, pointed to me and said, "Kill her."

Everything happened at once, too fast even for me to see. I awaited the pain, the exruciating agony... something. When none of it came, I opened my eyes and gasped.

There was so much blood, it was almost impossible to see him. He was dead, I knew he was, he was a goner. I remember screaming, getting angry, upset, devasted... way too many emotions for me to handle. I should have listened to the old man, I thought. I should have been smarter.

And way too late, I finally realized that I had loved the human, too. 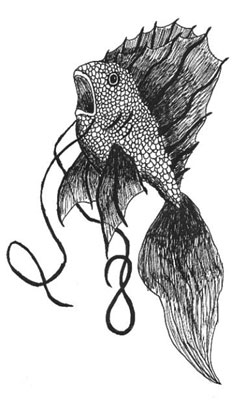