Golden sunlight shone through the cracks in my window shutters, beckoning me to come out. I put my hand on the delicate wood and slowly pulled it open as the sunlight poured in and glittered in the air. From being in the dark so long, I had to squint my eyes up to the sky and my eyelashes were twinkling in the light.

A squirrel scurried by and it made me giggle, my soft happy giggle. I noticed a blue jay perched on the branch extended very close to my window. It was singing a happy morning melody, and I found myself humming along with it as I started my chores. The floors were to be scrubbed and the beds dusted off before Mother came home this afternoon.

I started longing for that fresh air again and went over to the window, putting both elbows on the sile and my head rested on my hands. Suddenly the blue jay flew off of the branch and I watched it until I could no longer see it. It reminded me that I was, indeed, unhappy and trapped. It was allowed to just come and go as it pleases, fly around exploring the whole forest, and I envied it.

I sighed and started getting up to do my work again. Just as I was turning away from the window I saw a hint of red out of the corner of my eye. I peered back over the edge and saw a boy. I stared with very wide eyes in disbelief. I rarely ever see another person!
He was wearing a red shirt with a golden symbol on the front and tan pants and was climbing down a massive tree with quick skill and I could tell it was something he had done many times before. I had never climbed a tree before. Nor have I ever touched one. Many time I found myself wondering what it left like to lean against the thick trunk and feel the sun beating down on your face. Or rub the smooth delicate petals of a flower between your fingers. Or press your face down onto the warm earth and smell the natural scents of grasses and fresh dirt.
Suddenly I realized that he had noticed me and was now looking up into my eyes. I remembered my mother's warnings about the outside and the people with dangerous intentions. I quickly ducked under out of view. My breathe became faster as I became before frightened and I grabbed my hair around the front of my body for comfort.
I waited several moments before taking another peak and gasped at the sight of him still standing there. Why would he not leave? Where was Mother?
I clutched my knees waiting a while longer and dared not to look again.
"Hello?"
I looked above me and shrieked, falling against the floor.
"Who-who are you? What are you doing?"
The boy was now gripping the window seal and sticking in his head full of light curly locks.
"My name is William, I just wanted to see if you wanted to play. "
His question puzzled me and I just stared at him blinking a few time woh a quizzical look on my face. He looked about my age, I was turning ten next week, and didn't seem mean like my mother had told me everyone else was. He actually seemed really kind.
Finally I said, “ How did you get up here?”
“Oh, the bricks were pretty easy to climb.”
He had a small boyish voice and pale skin with a hint of pink in his cheeks. He reminded me of the porcelain dolls I had tucked away in my room.
I was snapped out of my daze when I heard the muffled sound of a door downstairs open.
“You really have to go now, quickly,” I harshly urged as I rushed to my feet. In the back of my mind I knew I had longed for some kind of company, something to do instead of this endless path of daily chores and boredom.
“You can come tomorrow in the afternoon if you want. Go very quickly.”
As fast as he had appeared, he was gone. 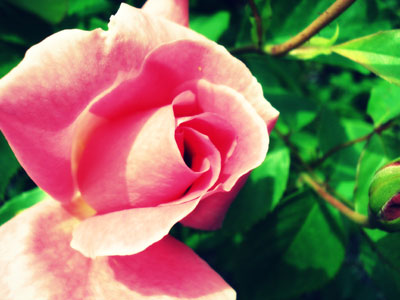 The author's comments:
I love fairytales, so I started writing my own version of Rapunzel, but with a twist at the end. That twist cannot be figured out yet in part one.
Post a comment
Submit your own