Favorite Quote:
"If I knew where poems came from, I'd go there"

The transformation wasn’t getting any easier as he got older. If anything, it became more painful. Lycaon was sixteen years old, and he was a werewolf. He had been one practically his whole life and hated with his whole heart and soul… If he had a soul anyways. Tonight he ran into the woods, it was going to be a full moon and he didn’t want to hurt anyone. Not again, not ever again.

When he was thirteen, Lycaon had lost track of the moon phases and didn’t retreat into the woods to wait it out as usual. He stayed inside, babysitting his little sister Marnie. She was seven years old and resembled him with big blue eyes and curly brownish-black hair. She was watching her favorite movie, Beauty and the Beast and Lycaon was in the kitchen popping pop-corn. Then, it happened.

The pop-corn kernels dropped to the floor, scattering all over the kitchen tile. Lycaon watched in horror as his body became concealed in shaggy brownish-black hair and saw his nose turn into a snout. Then he looked down at his hands and saw his fingers shrink and thicken, while witnessing his nails grow razor sharp and curve downward. With a yelp he fell to the floor, horrified to realize that he couldn’t stand up on two legs anymore. Then Lycaon writhed and howled in pain, his mind was changing now form human to canine. It was the most painful part of his transformation. He was literally losing his mind, all of his memories and emotions were depleting one at a time. It was worse than amnesia, because his brain was expanding and contracting until he had the mind of a wolf.

He went into the living room where Marnie was still watching her movie, giggling at Clogsworth. Then she saw Lycaon and cried out “Doggie!”, pure happiness written all over her face. She ran to go pet him, thinking that it was the biggest dog she had ever seen in her short seven years of life! That’s when Lycaon raised his giant paw and swiped at her precious, tiny face. His nails cut deeply and Marnie fell to the floor screaming with pain, blood pouring all over her hands and pajamas. Lycaon went outside through the screen door and ran into the woods; he was scared by the young girl’s screams. He spent the rest of the night there, hunting down anything in sight. He even took down a fully grown buck, the first in a year that he had taken down successfully.

Early the next morning he changed back to human, it wasn’t quite as painful turning back. He couldn’t remember anything that he had done the previous night, not feasting on the buck or hurting Marnie. But he realized that he had changed, that he had gotten the moon phases mixed up in his head for the first time ever. Why else would he be out in the middle of the woods with the remains of a deer carcass nearby? He normally went in the back where there were no trails for civilians to cross. So Lycaon made his way back home, unsure of what he would find.

About an hour later he was at the hospital holding Marnie’s little hand in his own. Crying silently, he listened to the doctors’ talk to his parents in hushed tones. “She’s lost a lot of blood.” “There’s a risk of infection.” “She’ll always have a scar there.” “It was a wolf!” His parents claimed, “There was paw prints in the snow!” This puzzled the police; there hadn’t been reports of a wolf in the area for years. That’s when Lycaon started to cry uncontrollably; he had done this, it was his fault. ALL HIS FAULT!!!!!

Three years passed and Marnie was a constant remind of what evil he was capable of. She had a long, jagged scar running from her left ear to her right cheek. She didn’t remember anything from that night, not “doggie” hurting her or her parent’s scream of terror when they found her not even ten minutes after Lycaon ran. They had found her lying on the floor with an ever-increasing pool of blood around her. All that remained was a fear of dogs and the scar.

Lycaon looked up at the night sky and waited for the transformation to be done and over with. He wanted to go home. 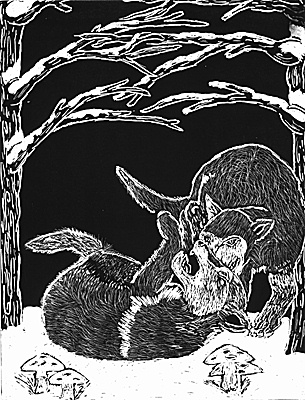 The author's comments:
I had to write this for the writing club at my school a while back, hope you like it! Please rate nad coometn, I'm dying for feedback! :)
Post a comment
Submit your own

InkWriter13 said...
on Jun. 22 2012 at 6:48 pm
I like the ending. I can feel the weary trudge of the burden he must bear. Superb writing on that. There are a few spelling errors (form to from), but not too hard to fix. Are you planning on extending this into a novel? I like the flashback sandwiched in between the present time feel, but this would make a good novel. It would fill in some holes of why or how he became a werewolf, how this complicates his relationships, what events propel him into a future of....etc. Great fiction work. I really enjoyed it. Thanks for all your comments on my work, as well. :)
poetic.eyes PLATINUM said...
on Jun. 26 2011 at 1:57 pm
poetic.eyes PLATINUM, Everson, Washington
23 articles 3 photos 198 comments

View profile
So frightening! It is good! Thank you for sharing it!
Mop-Mop said...
on Jun. 26 2011 at 5:47 am
Nice story.  The characters were well developed.  I feel bad for the boy/wolf and his scarred sister.
Grammie said...
on Jun. 24 2011 at 10:44 pm
It was nice. There was some similarity to one of the twilight books, the injury and scar, but it is good. I like how you describe the surroundings. Makes me really see the scene.
Grandma Florida said...
on Jun. 24 2011 at 10:03 pm
That was just absolutely wonderful.  I think the best so far.  I could picture the whole thing in my mind as if it actually was happening.  Loved it.  Amazing