Favorite Quote:
"I believe in music the way some people believe in fairytales."

A clap of thunder rumbled through Manhattan as Angie struggled to keep up with Anixiel as he rushed out into the pounding rain. Seconds later, Luke pulled up in the black Mercedes, and the two climbed inside.

“Lovely evening to be out, right Angie?”

“Uncle Kyle! What are you doing here?”

“Couldn’t let Luke here take on demons by himself now could I?”

“Like I’ve ever needed you,” Luke joked with a smile. That was something that didn’t appear often. His gray eyes had a glint of mischief in them as he looked towards his best friend.
“Where are we heading anyway, Anixiel?”

“I think Raphael’s item is at Bellevue Medical Center.”

“462 First Avenue it is then,” Luke replied almost automatically.

“You think there’s going to be demons there?” Angie asked, turning to her uncle.

“Most likely. Not very powerful ones though. At least I hope not. We didn’t bring that much stuff,” he replied, motioning to the barely filled duffle bag on the car floor. There were the basic things her uncle and Luke used like salt and holy water, but some of the things sprawled out she had never seen before. A revolver, scythe, and some seraph blades were also placed inside.

“You’d be correct,” Anixiel assured him, “but it won’t always be that way. We can always get more weapons from the church.”

“And we’re here,” Luke interrupted while pulling into the parking lot. The four stepped out of the car, and made their way up to the hospital. The black iron gates that had Bellevue Hospital spelled out at the top drove into each other as the wind forced itself upon them.

“What exactly are we looking for?” Angie yelled through the raging storm.

“A physician’s alabaster jar,” Anixiel shouted back while passing out the weapons from the bag.

“I know this hospital is old, but do you really think the jar will still be there?” Kyle asked half jokingly. Anixiel nodded and headed inside. Giving each other weary glances, Luke, Kyle, and Angie followed him through the sliding glass doors. A young receptionist with curly blonde hair smiled up at the group as they filed in.

“Is there anywhere I can direct you to?” she asked politely.

“The heart center please,” Anixiel replied with his charming smile. 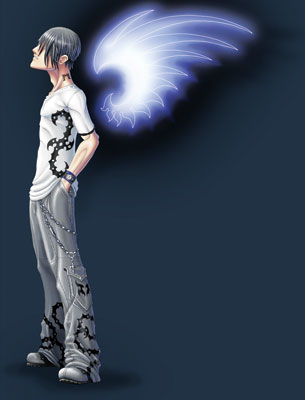 The author's comments:
This is another part of the book I'm writing called ArchAngel. If you would, please check out the other parts on my page!! They're not going in any specific order, and I'm just writing random parts when inspiration hits. Thanks so much for reading, and please don't forget to rate and leave a comment!!
Post a comment
Submit your own

Favorite Quote:
do what you want no matter what poeple think. If they mind, they don't matter and if they matter they don't mind.