The End of the Blade | Teen Ink

The End of the Blade

Favorite Quote:
“I have been mortal, and some part of me is mortal yet. I am full of tears and hunger and the fear of death, although I cannot weep, and I want nothing, and I cannot die. I am not like the others now, for no unicorn was ever born who could regret, but I do. I regret.”
― Peter S. Beagle, The Last Unicorn

The wind howled and swept his hair into his face while he stood looking upon the land. He stood strong despite it, his feet steady in the snow on the peak and the mist of clouds swirling around him. With a cry he raised his sword from his side and stood that way, blade to the sky, for a few minutes, mourning those lost.

Many he had met though few remained, each influencing him in ways they’d never understand. As he stood holding his blade he allowed himself the freedom of shedding tears for those lost, those who betrayed, and those who sacrificed. He hadn’t deserved to live any more than they, it was pure luck that he was the last one standing.

Though he survived he wondered if he’d ever truly live again, without those he had called friends by his side. He swept his sword in an arc and stabbed its point into the ground, never to be removed. He was done with blood and done with war, never again to take a life and never to lose another friend to battle. 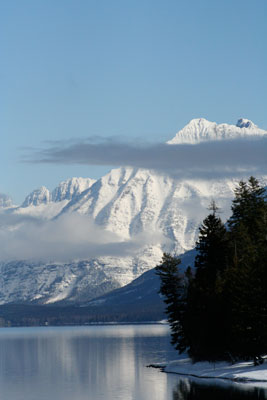 I wrote this from an idea that came to me while listening to Woe To The People Of Order. The song crafted this short story as much as my own mind did.