Kencil stumbled into the woods, drunk on pain. She was seaching for something, but she didn't know what. Something that would help. Everything hurt inside. Outside she seemed ok, if not for the broken way she stumbled through the woods. Pretty, almost. But for the expression on her face.

Finally, she couldn't keep going. She tripped and didn't get back up. A flicker of hope deep inside her burned. It tried to make her get back up, try to make her keep going and try again. It burned and stung. Salt in her wounds. She wanted to get rid of it. Get rid of all of them. Every ounce of happiness left in her. It hurt too much.

She felt something prick her finger and looked down to see a drop of blood on her finger beside the thorn of a white rose. She plucked it, heedless of the pain and blood pouring from her fist. She clasped harder and looked at it. It would take away her hurt.

She gently lay the blossom on the forest floor and poured the blood from her hands onto it. She pushed out whatever hope and happiness was left and gave it to the rose. It's petals absorbed her blood and it became crimson. She named it. Aasha.

She sat up and sighed, feeling nothing for a moment. The pain was still there. She couldn't give up the pain, she was afraid to. But the burn was gone. She felt numb at last. She held the rose close and whispered to it. At that moment, the rose became her everything.

One hundred years later, Daylee smiled at her friends tauntingly as they exchanged dares. They weren't her friends, and her smile was fake. It was all fake. She was fake. But she had to pretend to have some shred of emotion, and humanity.

“My turn?” she asked Darin.

“Yeah, sure. I dare you to go in the enchanted forest and find the ghost of Lady Kencil.”

She snorted, “It's not haunted. Magic has been gone for 75 years. I'm not afraid,” she played tough. She didn't know if she was afraid. She had heard Lady Kencil lived in a cursed forest, only a mile or so away. They said she killed herself young. Lady Kencils family castle wasn't in the forest, they said she went there to escape. And that her ghost haunted it to this day. “There’s no ghost, idiots.” she hoped…

They followed her to the forest and watched her go in. “what, you too scared to come?”

“It's your dare. You too afraid to go alone?” his face looked a bit nervous. The others laughed slightly, but fear shone like a beacon in their eyes.

She slowly walked in. She’d get beaten for sure if her father found out she had been here. And the others would torture her if she refused. Besides, she would get beaten anyways. No matter where she went she hurt. She didn't care about physical pain anymore, and she didn't care if they taunted her. But she kept acting like she did, maybe because somewhere she liked being hurt. It told her she was right to hate herself.

She would kill to keep the pain. It helped her hate herself more. It made her hate herself. She couldn't let go of the hate. She deserved whatever anyone did to her. Joy though, whenever she got it, she didn't deserve. Or want. Why would she want something that showed her the life she would never have, never let herself have? Lady Kencil was lucky to have killed herself. The shadows of the old, creaking trees in the dark night made her edgy. Every sound of deer or fox made her whirl. The moons grey light was dim and ominous.

Then she caught sight of light. Dim, too, but red. Blood red. She looked down and saw a glowing red rose. Odd. she picked it up and felt understood. It knew her pain. It could help. She held it close and stared at it. The deeper into its petals she stared, the deeper she wanted to look. The cry of an owl roused her and she looked around. Beside it was a skeleton in a ragged dress with withered skin. She stepped away from it and sat on a log with the rose.

Hello. I am Aasha. I feel your hurt. I understand. Let me help you.

The words entered her mind easily, and she found herself nod. Suddenly, she went numb. The pain hurt less, and all the remnants of joy left her for it.

When the time is right, I’ll tell you. I’ll help you, you help me.

“Yes.” she clutched the rose tighter. Her brown eyes turned a shade reddish, but she didn't notice. She walked out of the forest to find the others staring at her, half expecting a skeleton. Aasha was hidden in her satchel.

“Did you find the ghost?” she ignored him and shouldered past. Why bother to try and please them?

She walked into her home with no fear- and no hope. Her father tried to disapline her but she walked right past him. She had to get to her attic and take out Aasha! She escaped into it and took out the rose. It looked a shade faded, but she didn't notice.

“What should I do?” she just had a feeling she could trust the rose completely.

Nothing for now. Your course of action will become apparent soon. Your father is coming.

“Should I hide you?”

Too late. Keep talking, ignore him. It's your house too.

You can help me one day too…

Not yet. We’ll need to move first.

“Are you talking to a flower?” her father boomed.

Tell him to go away because you’re busy.

“YOU DO NO SPEAK TO ME LIKE THAT UNDER THIS ROOF!”

Don't live under his roof. I know a place, where we’ll be safe and the world can't hurt us.

“Ok.” she wanted to smile or be happy at the thought, but she couldn't. And she was ok with that. Besides, to lose that woud mean to give up Aasha. She turned to her father. “I’m leaving.”

“You’ve gone blooming mad! I’ll have you put away! Get down here now and take your punishment.”

You didn't do anything.

Tell him he can't control you and leave. Guard me, he might try to take me from you.

“You can't control me!” She left, right out the front door. It felt odd, and empty, but she didn't care. Aasha lead her to a cave, startlingly clean, filled with basic necessities and blood stains.

This is where my old friend lived. She was a lot like you. Her father hurt her with no reason, and she couldn't stand it. She found me and never went back.

“What was her name?”

Freedom. What is yours?

It was. Before you met me. Now you’re a new person, because of me. Take a new name.

Hello, Rose. I’m honored that you chose me. You’re better at this then Freedom. She didn't immediately figure out I was her new identity.

“Thank you.” She didn't question it.

They lived in the cursed forest. She discovered magic. She never harnessed it, and it only helped her when Aasha was involved. But Aasha was magic and she helped her. Day by day Rose needed her more. Day by day helping Rose drained Aasha, and her petals faded.

I need your help now.

I need your blood. Theres a knife on that table. Freedom used it to feed me. Cut yourself and wash me in the blood.

If Aasha said to, it had to be right. She slit it through her arm, wincing. But it was a pain she savoured. She enjoyed it in a way that wasn't positive, but was emotion. She finally had someone to tell her she was right to hate herself, and to hurt her again. Herself. She held her arm over Aasha and got as much blood on her as she could.

That became a pattern. Fairly frequent, in fact. She had scars to tell her she should hate herself at last. She didn't notice when a semi transparent slip of person appeared around Aasha. She saw Aasha as a person anyways. The more blood she gave the clearer Aashas human body became.

I need it all.

I need all your blood. Your life, Rose. When you found me you found Freedom's body too. She gave me her life too. For the greater good! If one more person feeds me their life, I’ll get a physical body.

“Was Freedom without you… Lady Kencil?”

Yes. she was hurting so much, and I helped. You were hurting too. I can help so many more people if I were human.

“Ok.” she didn't question Aasha. Aasha knew best. She took her and Freedoms knife to the place she found Aasha and cut blood from her throat. She poured it onto Aasha and died.

Ever after, a woman visited the weak. Nobody but the victim saw her. The victim gave blood to keep the ghostly woman happy and strong. They gave emotions to give her power over them. She took everything. And somehow, she always found so many broken. Too many. 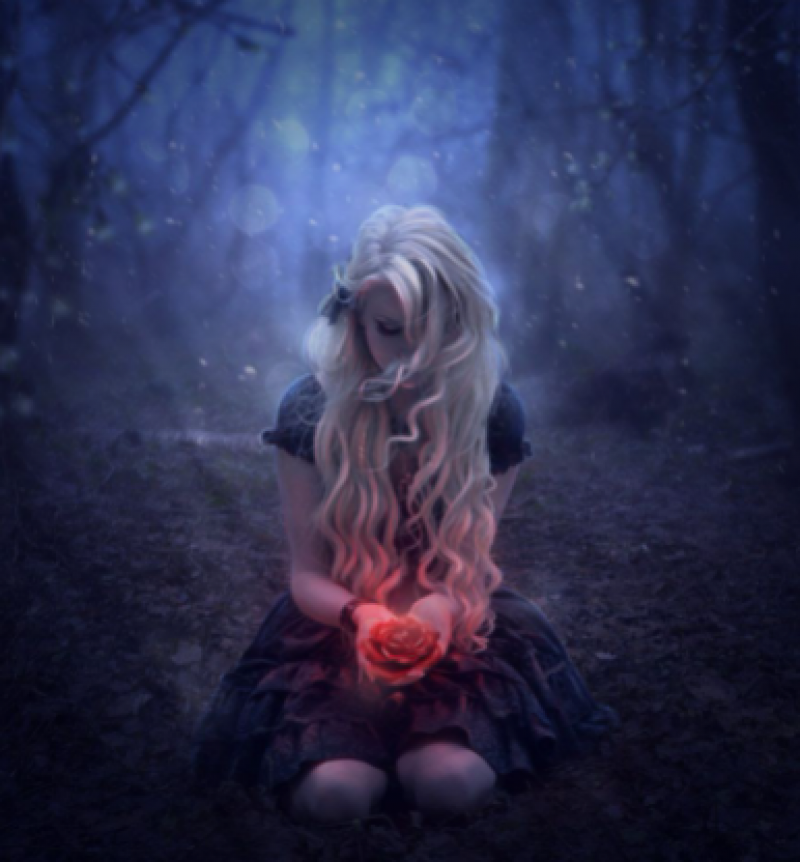 i accedently made the rose depression. sorry... i didn't mean too.

the rose is the only character I have who I would truly call a villain. the other antagonists i would call broken people who don't know what else to do.

i wasn't trying to say depression was evil. its a valid defense mechanism.

maybe I should have put the title in bold... is it to hard to read?

View profile
uh....... the title was hearttake rose. as in heart take. i don't know why its now heart attack. it was also in a fancy font.