Auryon tensed her bowstring as she walked into the lair of the dragon. Should she feel nervous, or happy? Her entire life built up to this moment. So? She had been preparing her entire life. The last ten years were all worth it now. She smiled, slightly.

Year one, she had just finished her ranger training. She had been so excited, so happy. She reported to the king for her first mission. He had told her a tale. A great, evil dragon terrorized their lands. Only a ranger had the skills to kill it.

“Why me?” wouldn’t an older, more experienced ranger do better? No. she would get plenty of experience tracking the beast. He had been right. 10 years, a personal training course. She was no child anymore. 31, now. She thought. Time was hard to track, elusive as the beast.

Year two, she was discouraged after finding no clues for so long. But she still had hope. She was learning real world lessons. She had fought many smaller beasts, none so great as the dragon would be. It was the last dragon in the world. She would be a hero. That thought kept her going. Bread and water to her mind, her soul.

She found a clue and some tracks, and everything in her rose. Her hope made her buoyant. She tracked through the blazing summer to the worst of winters. She killed trolls and ogres on her way. One of them killed her horse. No matter. She was a ranger, the trees were her mount.

Year three, she found it. Not the dragon, but merely a dark pegasus with batlike wings and a black coat, red eyes. Quick and easy to kill.  Every ounce of hope in her crashed out. That's when she realized. The hope had kept her going. It had become her.

Without it, she was nothing. Crushed. She was a hollow shell of a human being. She focused that entire being on the dragon. Hated that dragon with every inch of her being, and whatever hate was left was aimed at herself. She was a failure.

Year four, she continued to track the dragon. She didn't know what she would do, what she would be, when the dragon was dead. Maybe suicide would be her best option. That's when she remembered the king's final words. She could, and maybe would, go mad chasing the beast.

Year five, still no sign of the dragon, but it had left a trail in its wake. “No sign of that horrible beast, but when I find him, he’ll wish he was never born.” Auryon had stated.

The trail led to another dead end but when she was on the brink of giving up she found the trail again, it led to the mountains…

Year six, she had found a small village and after years of living off the land she welcomed shelter and even got herself a new horse but she didn’t stay long. She was on a mission, and she wasn’t going to stop until it was completed.

She had gone further into unknown territory, following the trail as she had done for years. She clicked her tongue and the horse stopped. She hopped off and bent down to look closely at the huge prints in the ground.

“This must have been left by our friend,” Auryon said to herself. She had been used to being alone. Sure, she had her horse but he couldn’t exactly talk.

Year seven, she was getting close, she could feel it. Suddenly her horse stopped. “What is it, boy?” Auryon questioned, “Easy now.” She tried soothing him but it was too late, he spooked, bucked her off, and bolted into the unknown forest surrounding her. Auryon looked up to see what had spooked him so bad and came face to face with a griffon. She whistled for her horse and ran to him before he had time to spook again and grabbed her bow, getting ready to shoot.

“Wait, wait!” the griffon gave a speedy response before Auryon had time to kill her. Auryon let her bow go slack.

“If you’re not here to kill me then what are you here for?” Auryon questioned. The griffon simply laughed and responded, “Kill you? No, I just thought you thought you need help. What are you tracking?” the griffon asked.

“A dragon. Why?” Auryon replied.

“Because that dragon you’re looking for is stealing all the food, so I would be glad to show you where he is. He lives in a cave up in the mountains.” the griffon said and pointed with his head towards the mountains.

“Thanks.” Auryon replied, and mounted her horse. She rode off.

Year eight, after her encounter with the griffon she had found many more clues suggesting that the griffon was right.

“We’re getting close, old boy.” She said to her horse.

Year nine, she had been following the trail for years and she was closer then she ever had been to finding the beast. What would she do when she found it?

“That’s not a question, I must kill it!” Auryon reassured herself.

She had done it, she made it to the dragon’s cave and was standing there bow in hand ready to kill it. She took one step into the cave but before she could go any further, she saw it. The beast she’d been hunting all these years was standing in front of her. It was beautiful, it was white with ice blue eyes and a long tail, and it’s wings were huge. How could she kill it? It was magnificent but she had to do it. She withdrew an arrow and aimed but before she could let go the dragon had thrown her. As Auryon lay in her own pool of blood she drew one last breath. 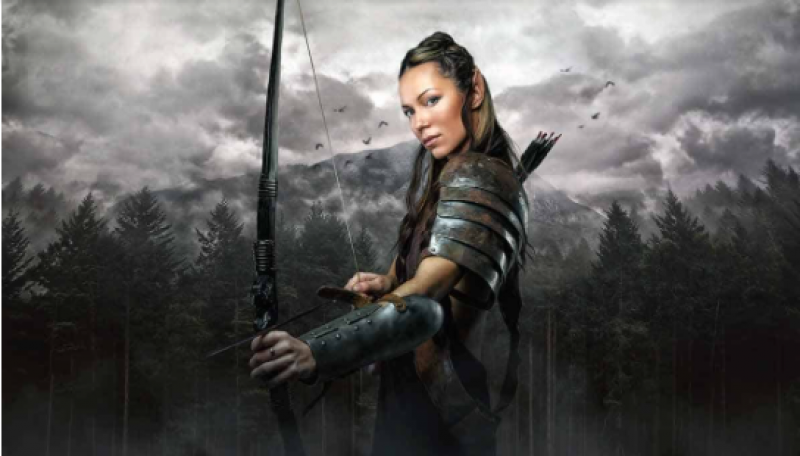 Favorite Quote:
Sparrow Sun: "And when ye shall receive these things, I would exhort you that ye would aask God, the Eternal Father, in the name of Christ, if these things are not true; and if ye shall ask with a sincere heart, with real intent, having faith in Christ, he will manifest the truth of it unto you, by the power of the Holy Ghost." Moroni 10:3 Book of Mormon
Wolves Rain: "Every secret of a writer's soul, every experience of his life, every quality of his mind, is written large in his works." Virginia Wolf

View profile
commenting on every cowrite so there will be links to the account
SparrowSun ELITE said...
on Jul. 9 2021 at 5:54 pm
SparrowSun ELITE, X, Vermont
200 articles 23 photos 1053 comments

View profile
wolvesrain did the end. this one we did a different cowrite style and did half and half
Lydiaq ELITE said...
on Jul. 8 2021 at 10:58 pm
Lydiaq ELITE, Somonauk, Illinois
153 articles 41 photos 1018 comments

View profile
That ending was brilliant, thank you Sparrow and Wolves!!