She stands in a high castle, pacing, her shadow dancing in the cold light.  She is barely visible from the window, only the moon is responsible for her shadowed figure.  She is calm, pacing slowly. Her head is tilted down towards something on the floor. Her crimson locks roll down her face, draping over her like the curling thorns of the forest.  She stops, lowers her hood. Her face is still inclined toward the floor, fixated on something that the light of the moon can never reach.

I, I must confess…

Unsatisfied, she raises her head high.  The waves retreat, the hood comes up. She steps out of sight, into the place where the moon can never reach.

It is calm, but not for long, she knows.  There is always danger, seeping through the cracks, picking at the locks of the fiery woods.  It’s bright out. The sun is dwindling down, it’s light filtered through the golden leaves to burn even brighter, mirroring every fallen leaf.  The chestnut horse treads on the leaves, its hooves thundering over the absence of a path. Her hood is up, her back is straight. She rides the horse with such grace, such control.  It it her natural habitat.

The horse is walking up a hill, not a steep one.  It is one in a sea of orange, the hills rolling over like tidal waves.  She stops, tugging the worn reins of the horse gently. Her senses are spiked, warning her.  She looks around, the trees smearing into one infinite Van Gogh painting. The wind is screaming a whisper, tugging at her.  You are not alone, the voices tell her. It makes her feel safer knowing the forest is on her side.

Something shakes at her core.  She can feel it thudding, a presence different from her own heart.  She tries to make sense of the painting around her.

They're here, she knows.

Black objects moving faster than the wind can be seen at the bottom the the hill.  She runs. When she looks back, their edges are curling the black smoke, polluting the trees and poisoning the wind.  There are seven of them, cold as ice and black as night.

If the morning light don't steal our soul…

Atop the hill, they surround her and her innocent horse, forming an impenetrable circle.  They stay stationary, and she rotates slowly cautiously. She wants to remember their faces, or at least the parts not covered by the masks.  She reaches to her side and the sword slices the air into thin pieces, the sound resonating through the misty canyons.

They keep still.  For an agonizing moment, they seem too still.

Then smoke as black as charcoal fills their fragile lungs.

She chokes, coughs, desperate for the flooding relief of cool air that seems so close.  She can see it in front of her, feel the wind on her face, but she only coughs up a smoke made of the blackest night.  The seven soldiers are falling off their horses, one by one, like dominoes. The fallen soldiers.

She looks up.  They must have no clue, but she knows.

Of course she knows.

I, I must confess…

He's there, atop a cliff looming over a pond.  He stands, devoid of a horse, his fists clenched.  He is dressed in such great shadow that she wonders if he has ever seen the moon.  If he has ever bathed in her light. Once, maybe. Once upon a time.

One of the soldiers falls into the pond.

She looks him dead in the eye with a last fateful, defiant glare while she's choking, convulsing.  He stares back, ruthless, towering over her. One second he's there, and the next, he's gone. She thinks her eyes are failing her.  She thinks she's falling off her horse.

He's standing over her again, but this time closer.  A knife rips the thin veil of the forest and she fades between reality and a place deep in the woods where the moon doesn't reach.  Don't let winter come, she begs to no one. Don't let our hearts freeze. The autumn should be good, and it is. She doesn't fear the cold, only the whispers of the wind that warn her of the change to come.

She's laying on a cold hard surface, probably the ground.  Her eyes are misty, like a fog is looming over her. She blinks, and the fog vanishes.  She sits up in a cold, dark room. It's not the same cold as before. The chill of the forest barely brushed the surface of your skin, and though it was chilly, it was gentle and welcoming.  This was the cold that cut down to your bones. Merciless. Rabid.

He stands there, the darkness of his stature now nothing compared to the shadows that claw at her in this place.  The smoke is gone from her throat, at it is the creator of this place. Though she can breathe, there is no air. She knows the shadow will come for her, but now, it sits patiently.  Looming in every crevice, awaiting orders.

She draws her sword.

Without the moon, he is gone.  She knows this, and does not falter in her coming steps. 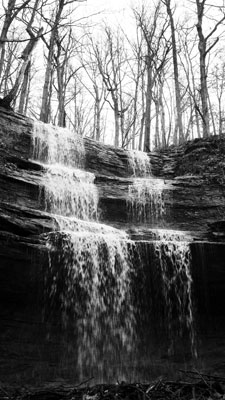 A story based off of the song Empty Gold by Halsey.